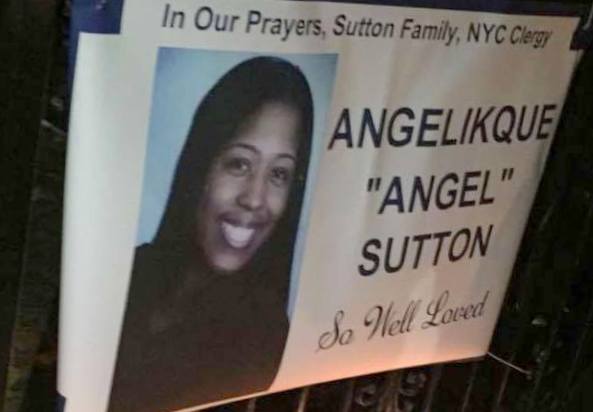 If you Google the definition of the word “angel,” you will stumble upon this phrase: “a person of exemplary conduct of virtue.”

Another definition characterizes it as “a spiritual being believed to act as an attendant, agent, or messenger of God, conventionally represented in human form with wings and a long robe.”

‘Angel’ was how friends and family referred to Angelikqué Sutton, who graduated last May with a degree in criminal justice. The nickname suited her not only because it was short for her name, but also because her friends describe her as a virtuous person.

“Angel was a light-hearted, and a genuinely sweet person,” said Arnequa Campbell, one of Sutton’s friends from St. John’s.

Sutton tragically lost her life last Nov 20 at the age of 22.

According to Bronx District Attorney Darcel D. Clark, Stutton was stabbed to death by a childhood friend, Ashleigh Wade, 22, at Wade’s Bronx apartment.

Wade was charged with murder, kidnapping and criminal possession of a weapon. She pled not guilty. If convicted of all the charges, she could face 50 years-to-life, according to the District Attorney.

Sutton was nearly nine months pregnant at the time of her death. For those who believe in angels, what was once Sutton’s nickname became a reality.

The District Attorney said Wade stabbed Sutton multiple times, “and slashing her in the abdomen in order to remove the nearly-full-term baby from her womb.” Sutton died, but her baby, Jenasis, survived — leaving a strain of hope amidst such bloody tragedy.

While many might have heard of Sutton because of the tragic way her life came to an end, others shared their personal stories and memories of Sutton with the Torch and how she was an angel in their lives.

Campbell is a SJU alumna, who also graduated with a Criminal Justice diploma. She was one of Sutton’s close friends at SJU.

“I met her on the first day of school, in St. Vincent’s Hall,” she said. According to her, they would hang out every day since the first time she met Sutton and their friend, Tona Carter.

Campbell spoke about Sutton’s caring and selfless side.

“If I told her I wanted to get Double J’s at 3 a.m., without hesitation, she would go just to make sure I did not go alone,” she said. “We looked out for one another. She was like family.”

To Campbell, one of the best memories she shared with Sutton was graduation day. “I remember people leaving after their names were called and none of us would leave until Angel crossed the stage, even though her last name started with ‘S,’” she said. “We all cheered for each other. It was one of the proudest moments I have ever felt.”

One of the many unique things about Sutton, according to Campbell, was that she always wanted to capture every moment.

“She used to like taking videos of everyday activities that we would do, or adventures,” she said. “Then, at the end of the year, she would make and edit a compilation video.”

When she found out about what happened to Sutton, Campbell said that she “thought it was not true” so she “did not initially panic.” She received a phone call from Carter and tried reaching out to Sutton herself, as she thought everything was a mistake. Following her failed attempts to speak with her friend, she decided to research Sutton’s name online and see if any articles would answer her questions.

“I Googled her name and it came up, since she had a unique spelling,” Campbell said, recalling when she got the confirmation of the news she feared. “It’s very hard to explain my feelings because it ranges from disbelief to helplessness every single day.”

The videos Sutton used to make were one of the things that helped Campbell cope with her death. According to her, she watches them so she can remember the “great times” they shared. Something as simple as seeing the car Sutton drove in the streets, a PT Cruiser, makes Campbell “smile and say a prayer,” as she believes that it’s Sutton’s way of saying hello.

One of the things Campbell misses the most about her friend was how she used to joke around as well as her laughter. Khari Pennicooke, another SJU alumnus, agrees with that.

“I’ll miss her laugh,” Pennicooke said. “It’s impossible to hear her laugh and not at least smile, regardless of how upset or distraught you were at the moment.”

Pennicooke was also a SJU Class of 2015 member, who graduated with a Legal Studies diploma. According to him, he met Angel towards the end of his freshman year. They met in the D’Angelo Center, when one of Sutton’s friends showed interest in him and Sutton decided to approach him regarding her friend.

“As funny as it seems we kind of used that to fuel the beginning of our friendship,” Pennicooke said, remembering how they had a lot in common. “From that day, she was always a shining light for me as far as female friendship, because she was super funny and was always transparent with me,” he said.

According to Pennicooke, Sutton was “hilarious.” They used to spend hours hanging out in her room at Century Hall “just cracking jokes and talking about anything.” He said how much he appreciated how honest and straightforward she used to be. There was not a single moment they shared that she didn’t make him laugh somehow.

“Something unique about Angel is the fact that she genuinely, and I mean genuinely, cared about others and never viewed nor spoke about anybody in a negative light,” he said. “That to me was amazing, and is something extremely admirable and honorable about her.” According to him, she would never hesitate to offer “a helping hand.”

“She used to buy me food, help me with my studies and always be there for me when I needed to talk about life’s ups and downs,” Pennicooke said. “She was absolutely one-of-a-kind in that respect.”

He said that when he received the news of her death from one of his friends at around 3 a.m., he shed tears.

“I didn’t even try to fight them back,” he said. “It didn’t add up and it didn’t make sense at all.”

Pennicooke recalled how it was a challenge for him mentally and emotionally to wrap his mind around what happened. He also said that he operated differently a couple of weeks after what happened, and that she did not deserve what happened.

“It was hard to lose a good friend like her, especially because I was so busy with my personal life that, for a while, I hadn’t reached out to spend quality time with her, even though we live a few cities apart,” he said. “You always think you have the time to build on friendship, and it was just cut short.”

A vigil for ‘Angel’

The Monday following her death, family and friends gathered for a vigil in her memory, and Pennicooke said a few words. “While I was there, the emotion just ran so deep,” Pennicooke said. “Seeing her mother, father, family members and friends and realizing the huge impact she had on all of us drove me to say something when the opportunity presented itself.”

“I had to let something go because, if I couldn’t let those words out, it would have eaten me later on,” he added.

While Sutton had an impact on Campbell and Pennicooke’s college experiences, she had been in Tona Carter’s life for about 17 years. She also graduated from SJU in 2015 with a Sports Management degree and a minor in business administration.

“We met back in kindergarten at our old elementary school, P.S. 87, in the Bronx,” Carter said. “Since then, we have gone to the same schools and graduated middle school, high school and college together.”

“I cannot remember a day where we did not laugh until we cried,” she said. “Even if it was not the most appropriate time, it was always happiness between us two and our friends.”

She said that her best moments at St. John’s with Sutton were when they lived in St. Vincent’s Hall their freshman year.

“Instead of going to sleep at a decent time the night before classes, we would spend the night taking endless pictures using our webcams,” she said. “Every prop we could find we could grab it and put on to add just for another photo. It was so silly when I think about it.”

Carter said that Sutton was a dancer and would start dancing anywhere at any time. According to her, she was also “very strong in her faith.”

“Living on campus, every Sunday, she would get up super early to dress and travel all the way to the Bronx for Church service,” she said. “She made it a habit to never miss Church. That is something I really loved about her. Her faith reflected through her. She had such an amazing heart.”

According to Carter, she went “completely numb” and couldn’t breathe following the news of Sutton’s death.

“I refused to believe someone would actually do that to another human being, especially Angel. I never imagined losing such a close friend and in such a terrible way,” Carter said. “You cannot describe the feeling, the pain and the hopelessness. My heart is broken.”

Coping with life without ‘Angel’

Having faith in God and being surrounded by “family, friends and love” is what comforts her and helps when coping with her friend’s death.

“God is amazing, even in this tragedy I was still able to see that,” she said. “Seeing the strength of Angel’s family during this hard time was very significant for me. It showed how powerful God really is.”

As what appeared to be one of Sutton’s most popular traits, Carter was someone who also mentioned that “Angel’s” laugh was “definitely one of a kind.”

“It was super contagious. There was no way I could stop myself from laughing if Angel started first.” According to Carter, Sutton’s personality was “so explosive and made everyone she encountered laugh.”

Sutton, or, as her close friends and family say, ‘Angel,’ had an impact on people’s lives, an impact that is invisible to those strangers who read the terrifying headlines or heard the news through acquaintances. Some people were fortunate enough to experience the power of her friendship and kindness throughout their undergraduate years at SJU.

“I just wanted to close by saying ‘I love you Angel’,” Carter said. “I will never forget how much of an amazing human you were. You always wanted nothing but the best for others. It is a blessing to have known you.”

“You were truly an Angel,” she said, in hopes that Sutton will hear her, wherever she may be.