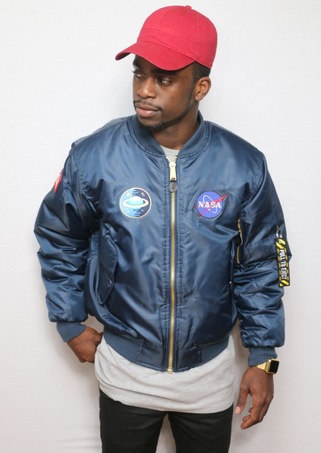 The beginning of 2016 was a challenging time for Jerome A. Perry in terms of creativity. After almost a year without designing anything new for his clothing line, he reached out to his family for some inspiration and words of wisdom. He spoke with his grandmother and shared his struggle with his creative block.

“I’ll pray for you,” she told him. A day after the conversation, she passed away.

Perry’s grandmother’s last words to him were what inspired his second clothing line, P4R, which stands for Pray For Rome.

The Torch sat down with Perry when he was a sophomore and had just started his clothing line, HOODNYC, in 2014.  He is now a senior business management major with a minor in fashion.

HOOD stands for High Off Our Desires. P4R follows the same concept of mixing urban street wear with high fashion.

HOODNYC “accidentally started” following a joke with his friends, when one of his friends dared him to design a shirt and to posted on Tumblr. He made a shirt for himself and the design caught people’s attention online and in person. That same shirt’s design was so important to him that he got it tattooed in his arm.

“There was really never any pre-planning or anything, it was just like a-go-with- the-flow type of brand,” he said. “But, as I started getting older, I was like, if I really want to do this, I need to be more serious and actually plan. So, that’s when I decided to switch from HOODNYC to P4R.”

He received the support of many of his friends, who are always providing honest criticism to him when it comes to his new ideas.

“And, I’m the type of person that wants my friends to do well also,” he said, about how he often features some of his aspiring model friends on his website. “They can grow their brand as well as helping me out. I love doing that, I’m all for it,” he added.

Despite the “usual haters” at the beginning of his career, he always kept his optimism intact. Some people would ask him why he is doing clothing when everyone else is in that industry.

“I’m kind of like a determinate person.So, in my mind, if I want something I’m going to do it no matter what anyone else says,” he said. “And, if I fail, that’s going to be used as a learning lesson, because I’m not afraid of failure.”

Perry considers Kanye West to be one of his biggest inspirations when it comes to the fashion industry. According to him, the fashion in New York is very different from the fashion he grew up around in Maryland.

“In high school, when I used to dress like Kanye or wear skinny jeans, that was seen as kind of crazy, like, ‘what are you doing?’” he said. “But, I just felt like I was expressing myself and it was cool, and [Kanye] gave me that inspiration to do whatever I want,” he added.

“Every since then, I’ve been kind of just open to doing my own thing,” Perry said. “If you like it, cool. If you don’t like it, that’s cool too.”

Perry said that one of the coolest experiences he had throughout his designer journey was when he met a music producer who helped him with the recording of a HOODNYC commercial.

Through that connection, he was able to get into four fashion shows and expanding his brand overseas. Places included Italy, Netherlands, Germany, Australia, Taiwan and Poland.

According to Perry, he wants to become an entertainment lawyer. Currently interning at the business and legal affairs department of Atlantic Records, he is juggling all of his aspirations at once.

He is also a social chair of his fraternity, Kappa Sigma and a promoter at a club, something that he does it for fun and business. Perry is also an occasional meditator, something he does to clear his mind and flourish his creativity. “With all that going on, I want to take P4R as far as I can go with it,” he said.

Perry wants to have his own business at some point, and he feels that the law skills will benefit in his success as well.

To all those people who aspire to create something, but are scared to get shut down, Perry left a piece of advice that helped him move forward in his own career.

“You can’t really be afraid to fail,” he said. “I used to fail at a lot of things before I got good at anything, and you never know until you try.”

If you’re interested in checking out more of his designs, you may do so by clicking here.