A day in the life of ROTC students 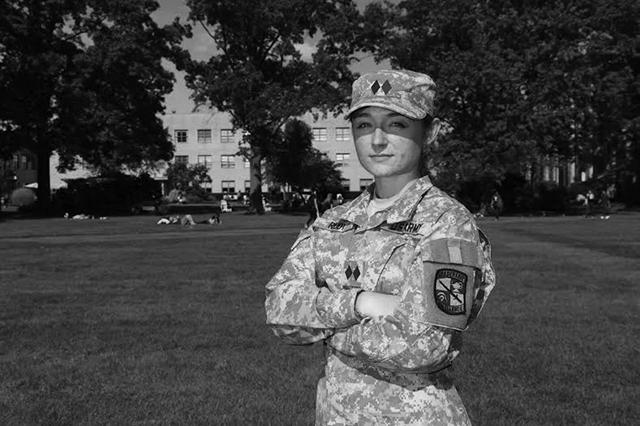 Senior Elena Rudy is a biology major and ROTC member.

Most people don’t know the difficulties ROTC students go through. From giving up their social lives and extracurricular activities, to having to change majors due to the program’s intensity, to trying to make a career for themselves within the army, a lot is sacrificed.

St. John’s Army Reserve Officers Training Corps started in 1968. Today, there are 68 cadets in the program who strive for nothing but success.

Instead of enlisting in the armed forces, many students join ROTC to achieve positions that are only available to those with degrees.

One of these students is Elena Rudy, 21, who grew up watching her dad working in the government.

Born in Orlando, Fla., she moved to Sicily, Italy and then to Germany and England. Her dad is now in Italy, where she goes back every so often.

Back in high school, Rudy was recruited by colleges for track and field. She also participated in theatre, as singing and music are some of her passions. It was her dad that motivated her to take a look at ROTC when it came to deciding on a college.

Now a senior at St. John’s, she is currently one of two biology majors in the program. Like many ROTC students, they see this opportunity as a benefit since they can graduate without the burden of student loans.

Rudy applied for the Army ROTC National Scholarship, which she received from SJU. She called this a major “driving factor.”

Being a biology student and an ROTC cadet can be very difficult at times, as some may not understand the sacrifices they make.

However, the benefits can be rewarding. Rudy’s favorite moment so far was traveling to Bulgaria the summer after her freshman year thanks to the program CULP, which stands for cultural understanding and language proficiency.

Through this experience, she was able to see a whole new culture and gained an opportunity to understand a little more of what this world has to offer.

In Bulgaria, she taught soldiers English, but Rudy wasn’t the only one to gain an experience like this. Each cadet in the program is able to travel to different countries.

Junior Christopher Gabayan, 20, the other biology student was able to travel to the Philippines for a few weeks this past summer.

From West Hempstead, New York, Gabayan joined Army ROTC because it was similar to a program he did in high school where he met his future friend and roommate, Nate Woodcock.

On top of the heavy workload for Rudy and Gabayan, they both have other sets of duties that call for sacrifices, especially in their social lives.

Rudy’s way of winding down is by ordering food and watching movies with her boyfriend who is also in the program. They are always supportive of each other. When she isn’t at home relaxing, she is seen at one of her favorite artist’s concerts, since her love for music goes off the charts.

For all the ROTC cadets, Mondays and Fridays are their best days since they can sleep in and don’t have physical training in the morning. PT goes from 6 a.m. – 7 a.m., afterwards, some students might even have a 7:30 a.m. right after.

Sometimes, around 6 a.m., you can hear the chants of the cadets during their PT.

“During PTs it depends on what we will do, sometimes we’ll run, do a lot of body weight exercises,” Rudy said.

Rudy, Gabayan and many other cadets use the ROTC building for hangouts and studying spots. It is their home on campus, as they all have a tight bond.

He then has to attend a meeting with ROTC during common hour. Once he finishes classes at around 5 p.m., he then attempts to go to the gym to train even more. He starts work around 8-9 p.m. and falls asleep around 12-1 a.m. And repeat.

Because Gabayan was a PA major, he couldn’t deal with the daily regimen.

“One morning we ran four miles with 80 pounds on our backs,” Gabayan said.

Rudy is able to manage schedules like this because she is able to prioritize. This is Rudy’s advice to all freshmen who consider joining ROTC.

Rudy explains how she is not a partier, “We are not college kids, not the normal college kids.”

Before Rudy’s workload got more complex, she was on the school’s track and field team at St. John’s, a part of campus ministry and traveled in a freshmen plunge program.

She loves to partake in midnight runs when possible and she was secretary for We Are One 365 on campus her sophomore year.

“[The] biggest thing learned and developed is that you can always do more,” said Gabayan, who is also president for We Are One 365 and part of Sigma Alpha Phi honors society.

“College is about a time that students focus on their selves and skills of future career,” said Gabayan. “ROTC is about helping and mentoring other people.”

In ROTC, seniority entails responsibility such as being a squad leader, like Rudy.This job requires mentoring seven to nine cadets and teaching them how to lead.

Being in ROTC has helped these cadets become better students and leaders.

Rudy recently applied to a physical therapy school at Baylor University in Texas where she hopes to go to graduate school.

She will also be an active duty officer.

Gabayan’s plan is to become commissioned and be a physician’s assistant under the military.

Both cadets and students are not soldiers yet, but they work hard everyday to become something great.

“One thing is I wish the school would help us out with simple logistics like rooming us together in the same dorms,” said Gabayan.

“There are a lot more preferences to the athletes and [they] do great things, but we do things just as great and even better. We are not just playing ROTC.”