“The One”: How an SJU love story began 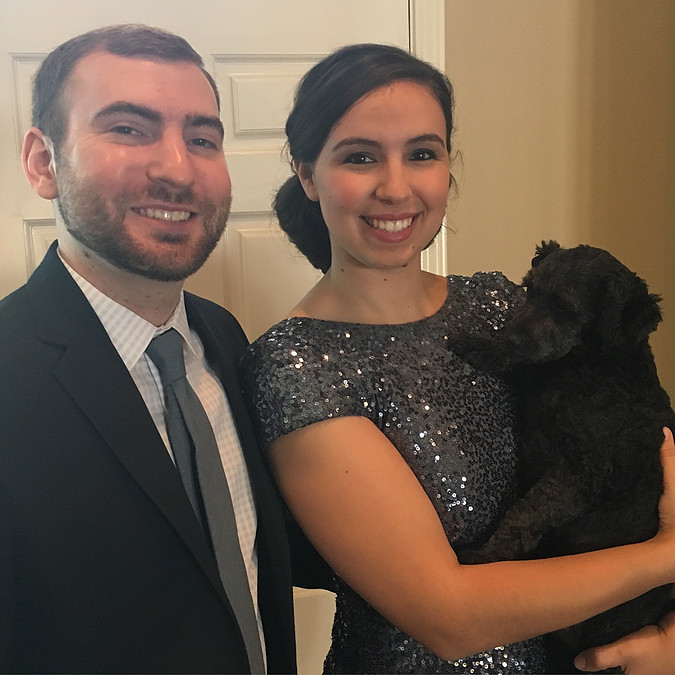 They say that love happens unexpectedly. For St. John’s alumni Michael Cunniff and Nicole Valente, this couldn’t be more true.

The two met while attending St. John’s, but it was an encounter outside of room 125 in the D’Angelo Center in the spring of 2012 that really brought them together. Now, four years later, these former students are engaged and preparing to begin the next chapter of their life as a married couple.

Cunniff, from southern Massachusetts, explained how he first encountered Nicole during freshman year at St. John’s University. He says the two met at an honors college softball game, but Valente said she doesn’t remember a thing.

“Mike swears he was taken with me at that point,” Valente said.

The two of them laughed as they tried to explain their first encounter, which still seems to be a point of controversy.

Valente has no memory of encountering her future fiance during the game, but according to Cunniff, there are pictures to prove it.

“I remember speaking to her,” he said. “I remember to a substantial degree what she was wearing.”

During his freshman year, Cunniff said he was interested in sports, and wrote a blog for the Torch.

“So when I got to St. John’s, before I knew any better,” he said, chuckling, “I went to The Torch meeting freshman year, and the sports editor mentioned a blog.” I went home and found some stupid thing and wrote about it, so I was the only one who did that.”

From there he started working more on the blog and other articles, later becoming the sports editor.

Valente, on the other hand, didn’t get involved with the Torch until her sophomore year, after seeing multiple grammar errors in the paper.

“I had read the newspaper and saw like four or five grammar errors on the front page or something horrible like that,” Valente said. So she thought, “You know what, I’m just going to go and be their copy editor.”

Despite having a theology class together freshman year, and being in the same group of friends since their Donovan days, it wasn’t until the two furthered their involvement in the Torch that sparks began to fly.

In March of 2012, the two wrote a “Jack & Jill” column for the Torch, where they had to answer the question, “who should make the first move?” They said it was as if the two were telling the other what to do, as if it was geared toward each other.

A true St. John’s romance evolved from there, complete with a first date at Coldstone – the quintessential SJU date spot.

“Not at all surprised that they are engaged, nor was I when they started dating,” Terence Cullen, friend and former News Editor of the Torch, said. “I’ve known them both about five years and they bring out the best in each other.”

While the Torch was significant in both their lives, they agreed that if it wasn’t for attending St. John’s, they would have never met so many amazing close friends, and more importantly each other.

“We met some of the best people that we will ever meet,” Valente said.

And it’s these people who remember the couple most fondly.

“Nicole was my roommate during all four years at St. John’s, so I’ve been around since the beginning,” alumna Claire Dunphy said. “They’re two of the most casually brilliant and fun people individually and they’re such a great match for each other.”

Kieran Lynch, the former Editor-in-Chief of the Torch and a friend of the two, said the couple complement each other.

“The two of them worked perfectly together,” he said. “They were basically my Torch parents, giving the right amount of encouragement and room to grow. I have no idea where I’d be in my career if it wasn’t for them.”

A former Managing Editor of the Torch, Mitchell Petit-Frere, said that while he thought Cunniff and Valente were total opposites due to their energies in the office, they were also the perfect team.

“I think their closeness is a big reason why the Torch did so well during their stint as EIC and Managing Editor – the trust they had in each other put everyone else at ease.”

The drive, intelligence and ability to work with others that their friends and fellow e-board members spoke so highly of has been transferred into their post-graduate life, which also had a deep impact on their relationship.

After graduating from St. John’s, Valente, an Illinois native, chose to attend law school at the University of Texas at Austin. She recently graduated and is beginning a job as a first-year litigation associate at a law firm in Manhattan.

“I really liked the idea of going to Austin,” said Valente. “I knew it was a great school, plus great weather for a few years is a no brainer.”

Cunniff, on the other hand, went down to Washington D.C after graduation to work as a news editor at The Washington Post Express. Despite the distance though, the two made it work, traveling to see one another and spending breaks together.

“It was hard knowing I was going to be away from Mike, but I don’t know,” Valente continued, “Neither of us ever really felt like that was going to break.”

“We knew it was going to suck going in,” Cunniff added.

Cunniff later decided to attend law school as well, and made his way back to Massachusetts to attend Harvard University. He’s still a student at Harvard, so the distance remains, but neither are phased.

“We never were worried that we weren’t going to make it or that one of us wouldn’t follow through what we wanted to do for the other one,” Valente said.

Being busy has always been a facet of their relationship. While in college, they said that their dating life consisted of a lot of “Netflix and chilling” before it had an underlying meaning attached to it.

This was particularly true when it came to The Torch, where the two spent much of their time.

“Pretty impressive that they had this management position and the two of them were in charge,” said the Torch’s advisor, Jim Baumbach. “And then to keep their relationship really out of the newsroom and that’s an important thing.”

Being their advisor his first year and their last for The Torch, Baumbach said he is excited for them. “I think they really compliment each other really well.”

The two were really curious and excited to hear what their former advisor and longtime friend had to say.

“There would be a lot of times Jim would call, and it would be one or the other that would pick up,” Valente said. “Because we were together.”

It was New Year’s Eve of 2015 that Cunniff decided to pop the question on a skiing trip in New Hampshire.

“He asked me to marry him, and I said,” said Valente. “I think I started crying for a little bit.”

Now, four and a half years after meeting, they plan to get married in October on Valente’s parent’s anniversary in Cape Cod, Massachusetts where the Cunnifffamily used to have a home.

“Once we started dating, absent circumstances, she was the one,” Cunniff said.