A promising initiative for SJU foodies 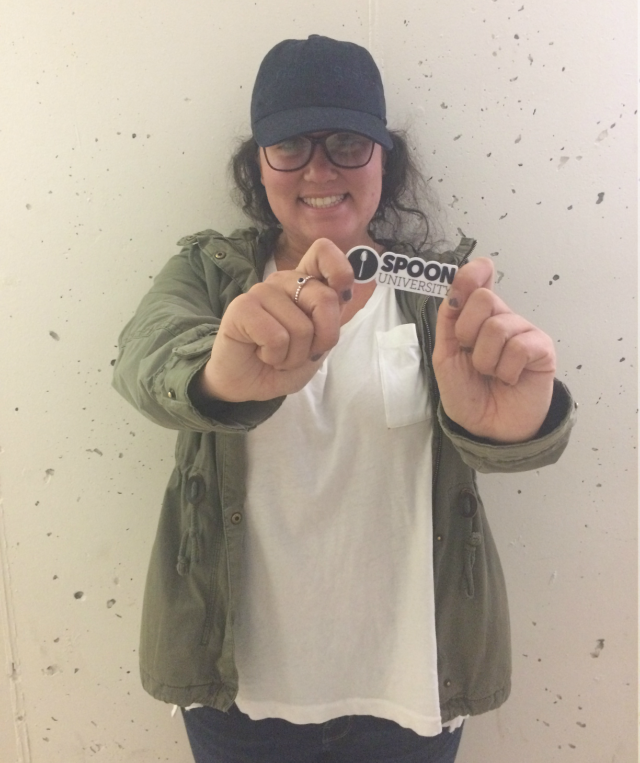 Lauren Majid, creator of the SJU chapter of Spoon University.

“We are like your best friend who eats all your food but knows exactly where to get the next big thing, right before it breaks,” Lauren Majid, the creator of the St. John’s University chapter of Spoon University, gushed about the new food-crazed organization that promises to be a hit among Johnnies.

If you love food and you’re a college student, chances are you might have already heard of Spoon University’s initiatives to help students learn about food and engage them in ways to prepare deliciously simple meals, snacks, drinks – you name it.

The reason Majid says that the company was created “by our generation” is because the co-founders, Sarah Adler and Mackenzie Barth, were both college students at Northwestern University when they decided to create a website in 2009 that reflected college student’s growing infatuation with all things food. According to their Facebook page, the company has over 5,000 contributors in over 150 college campuses both nationally and internationally.

Majid, a sophomore majoring in Communications with a focus in Journalism and minoring in Social Justice and International Studies, created the chapter in St. John’s last year and now runs the marketing team.

Although she was a freshman at the time, Majid didn’t let the fact that she was new at the University keep her from fulfilling her ambitious dream to bring the food oriented organization on campus. One of the first things she had to do was to go around campus and get 500 signatures in order to make St. John’s a Spoon University.

“We don’t have anything like this on campus, nothing food specific, so I thought that it’d be a good refresher and a good project for me to fill my entrepreneurial needs,” Majid said.

She was introduced to Spoon University through a friend’s sister who went to Northeastern University and was a part of the organization there. Majid would constantly see the girl’s posts on Facebook and was entranced by the idea of writing about food.

“I’ve always been really interested in writing, but could never find my beat,” Majid said. “So food is definitely that. There’s a lot behind food that people don’t really know, like the economics, business and politics behind it, so I was immediately drawn to that.”

Although the chapter now has over 30 writers with a growing online presence, Spoon University isn’t recognized as an organization by Student Government Inc. (SGI) just yet. Majid is in the process of filling out the application, but is struggling to find a faculty member to sponsor them.

However, this doesn’t stop students from applying to become a part of the organization. Students who are interested in joining can apply at the beginning of each semester by going to Spoon University’s website. The process includes a one time $15 fee for Secret Sauce, a tool that they use to teach writers the skills they need to write and make their work stand out among the rest. Afterwards, they’d have an interview with Majid where they discuss their resume and their work to see if they’ll be a good fit. Whether you’re a writer, photographer or videographer, there’s something for you in the organization.

It’s no wonder the site has achieved so much success these past few years, with publications like Buzzfeed and Tasty receiving a lot of attention due to their short and sweet recipe videos online that seem to make their way onto everyone’s timelines.

“A lot of our writers actually get picked up by Buzzfeed or MTV or Huffington post,” Majid said. “It opens a lot of doors for people and it’s like a little online portfolio to hand in to potential bosses, which is pretty cool.”

Majid was once interested in pursuing a career in fashion, even going to the Fashion Institute of Technology to take courses during high school. Yet, as she puts it, “one thing led to another,” and she got accepted to St. John’s Ozanam Scholars program through her service for the homeless youth. Through the program, she did research about food security for the homeless and saw an important connection that people have with food.

“I feel like food is a really good foot in the door to get awareness out for certain aspects,” Majid said. “Everything goes back to food… So I feel like with being an Ozanam Scholar and the opportunities there, but also being in charge of Spoon University here and working with Spoon HQ makes [me] a more well-rounded person when it comes to talking about causes and issues.”

For students who wish to start a chapter of an organization that they feel passionate about on campus, Majid had some words of wisdom.

“If you have a dream you have to go after it,” Majid said. “There’s a lot of people who are going to question you or think you’re nuts for trying to take on a big project, but go after it. You have to know from the beginning that it’s a lot of work, like a lot of nights where you’re up until 3 a.m. making phone calls…But it’s totally worth it.”