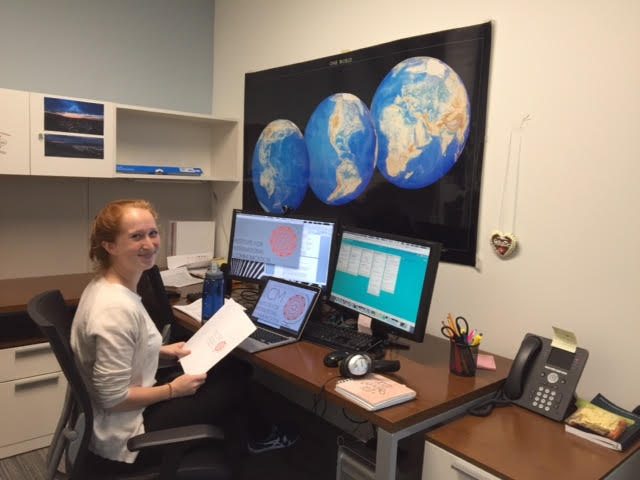 She’s a transfer student from Stuttgart, Germany and new to St. John’s University. She’s also the only Fulbright scholar at the College of Professional Studies (CPS) and one of only two Fulbright scholars at the entire University. But being in the big city hasn’t put a damper to Julia Theilen’s pursuit of success.

“We are very fortunate to have her. She’s a full time scholar and she’s also the right person at this time…to lay the foundation for this institute,” said Dr. Basilio Monteiro, the director of the Institute.

Theilen moved to New York in August and ever since has been busy with helping the Institute gain ground. August was also when the Institute was developed. Between 45 and 50 students are part of the International Communication master’s program currently, and Theilen is the only student worker the program has.

She has degrees in public relations and advertising as well as marketing, which gives her an advantage as to what content to put on the website and how to get the attention of students who are interested in the program.

“We don’t have other universities offering this degree,” Monteiro said.

“Because it’s a combination of international relations and political economy of media, it has a great appeal.”

For this reason, Theilen chose to study at St. John’s University. She said that in Germany she always wanted to study abroad and coming to the United States was always exciting.

“I picked St. John’s because of the program because in Germany many masters programs focused on corporate communications and I didn’t want to do that. This program focuses on non-governmental organizations and communicating for a good cause,” she said.

She joked that she didn’t think she would receive a Fulbright Scholarship, the highest an international student can obtain to come to the U.S. However, her resume, internship participation, language proficiency and grades at her German school proved her wrong.

“I went to the international office that advises students that want to go abroad. The guy told me that I should definitely go to the U.S. and get the Fulbright scholarship. He looked at my grades, my resume, everything and said I have a chance and I applied and got in,” said Theilen.

Although she grew up and lived in Germany her whole life, she speaks English at a professional level with no accent indicating that she was from a foreign country.

“I love languages and learning different languages. For example, I think that in order to graduate (in Europe) you have to prove proficiency in another language. I speak English, I speak German, I speak French, and a little Spanish. I learned Latin too. I definitely want to improve on my languages,” Theilen said.

Now halfway into her first semester at school, she’s looking to the future to expand IICM’s reach to students in and outside St. John’s with the development of Facebook and Twitter pages. Both she and Monteiro want people to know about the events the institute will hold because not many look at the school website.

“The purpose of the institute is to provide a home for ongoing conversations and discussions about international communication issues with academia and the industry. That is our primary objective,” Monteiro said.

Theilen plans to be a student worker until she finishes her master’s degree but she also looks forward in moving back to Europe and working for companies that primarily focus on animal and human rights.

“I want to work for a company focused on a good cause but other than that I am very open. If I say I just want to work for company “x” then that limits my perspective. I do want to however use my communication degree for a noble cause,” Theilen said.