Dior’s ‘WE SHOULD ALL BE FEMINISTS’ shirt 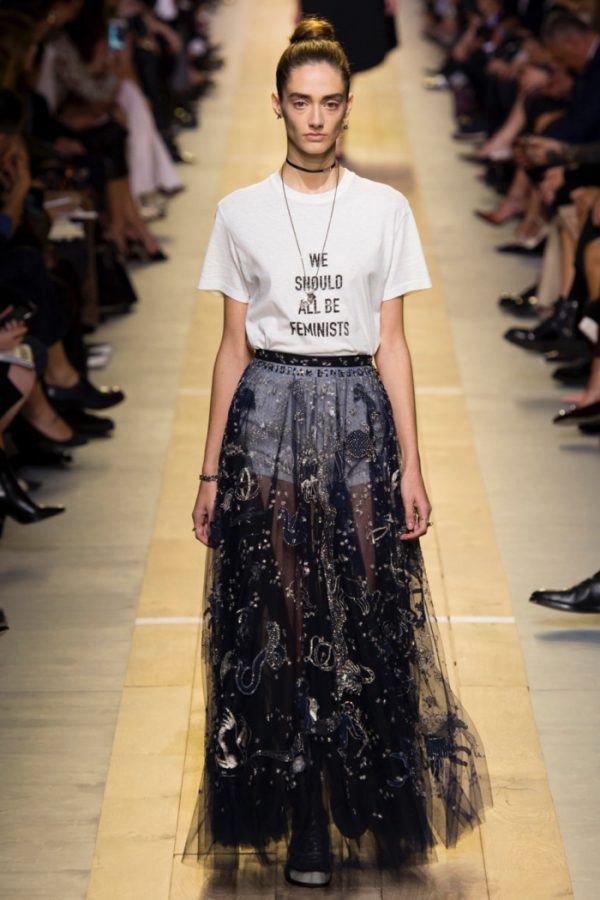 It is a rare instance when fashion and activism coincide. Fashion, like all art, acts as an escapade from the cold reality in which we live in. However, now-a-days it seems that fashion is taking a tip from the women marching in the streets.

Thanks to Dior’s new creative designer Maria Grazia Chiuri, you too can be a high-fashion feminist with a $700 shirt. The slogan on the white t-shirt reads: “WE SHOULD ALL BE FEMINISTS.” Chiuri, the former Valentino designer, is the first woman to take the title of Dior’s artistic director. In this case, art is imitating life in the form of Chimamanda Ngozi Adichie’s words. Adichie, whose TEDxTalk was also featured in Beyoncé’s “Flawless” song, is known for speaking out about feminism. The fact that Dior incorporated the on-going struggles of women in society and their attempt to dissolve the negative stereotype that comes with the term “feminism” speaks volumes about those in power. Fashion companies have such an instrumental role in society, not only do they establish what is in fashion, but they pave the way for their own art to be imitated by others. Paraphrasing “The Devil Wears Prada”: what gets chosen to be high-fashion will eventually trickle its way down to department stores and etc. finding its way down into the “unfashionable” person’s hands. So by seeing celebrities and models wearing these kinds of shirts promoting feminism, it opens the door to be socially acceptable to announce oneself as a feminist.

While this t-shirt might be the new rave in the fashion world, having appeared on the body of several celebrities such as Jennifer Lawrence, Natalie Portman, and Rihanna, there is still criticism about its capitalistic agenda.

Megan Solomon, Feminists Unite’s Vice President, says “I just think the shirt is a little tone-deaf; celebrities will buy a shirt proclaiming their so-called ‘feminism,’ for an extraordinary amount of money rather than buying a cheaper alternative whose profits go toward those who need it, or just donating that same amount of money to at-risk women’s communities. Profiting off of a movement that is trying to help marginalized communities isn’t feminism to me.”

Dior slapping a $700 price tag on a plain white t-shirt does seem overpriced, but chances are if you are attending these runway shows you are most likely able to afford it. It shouldn’t come to anyone as a surprise that Dior is expensive, it is couture after all. This shirt is a reflection of what’s going on in society and the fact that Dior has said anything about it at all says more about the people in charge , and their desire to be a part of such a movement, than the fashion houses who have chosen to stay silent.