“He Will Not Divide Us” Exhibit 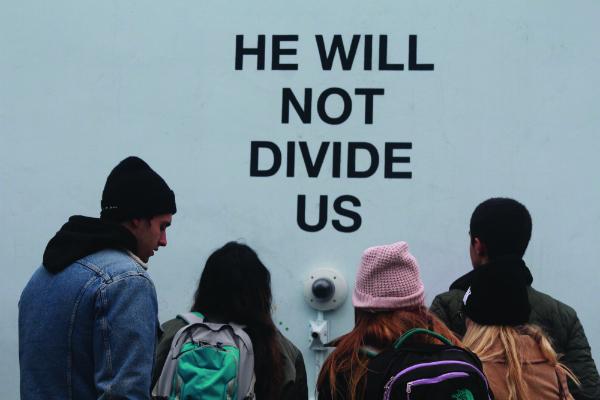 Amidst much political tension recently in the U.S., and New York City, an exhibition at the Museum of the Moving Image in Astoria calls for unity and peace.

Created by Shia LaBeouf, Nastja Säde Rönkkö and Luke Turner, their exhibition called “He Will Not Divide Us” opened on Inauguration Day and will record for the entirety of President Trump’s term.

This serves as a platform for people of all races, religions and political beliefs to come together, stand in solidarity and chant the phrase.

The exhibition is outside of the museum so that passersby can also join in. A camera is mounted on one of the walls and above it writes the words “He Will Not Divide Us.”

Shia LaBeouf, the lead actor from “Holes” and the “Transformers” franchise, usually is there to be the main voice behind the chants, however I missed him on my visit.

Other celebrities, like actor and rapper Jaden Smith, have also shown their support for the cause via social media and stopping by for a visit.

I went to the exhibition this past weekend and was pleasantly surprised to see the kindness and friendliness of the people there.

Of course, there were some people who wanted to disturb the peace by chanting pro-Trump slogans even though the exhibition itself is not “anti-Trump.”

What really made my experience there special was that one man was nice enough to order pizza and buy hot coffee from Starbucks to give out to the other people there. On a day with snow flurries and 30 degree weather it was an extremely kind gesture, proving that there are still some decent people in the world.

While I normally would think that singing, dancing and chanting with strangers is odd, I felt completely safe and included. Everyone was able to voice their opinions without harsh judgement and I believe that is incredibly important right now in society.

Other St. John’s students who have visited the exhibition only had good things to say as well. “It was very interesting to see people come out and show support, and also not show support.

It was also crazy to see Trump supporters there because it’s not somewhere I would think they’d choose willingly to be,” said sophomore public relations major Alyssa Morris. “I think Shia is doing something important for these next four years ahead of us.”

For politically active students who believe in a united people, this free exhibition is only a subway ride away into Astoria and is definitely worth the visit.

The livestream is shown at hewillnotdivideus.us.