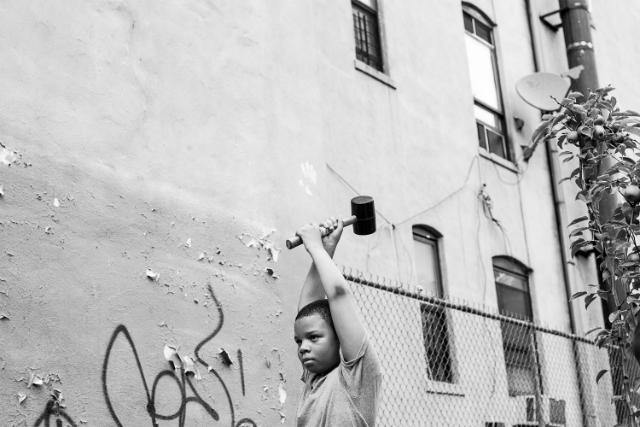 Snapping pictures to look at and frame is not what photography is to BFA Photography student Abigail Montes, it is capturing a moment that tells a story.

This outlook on her craft since the age of 17  is what brings Montes to this current point in her career as one of five photographers, and the only one from St. John’s, featured of EnFoco’s “Next Generation of Bronx Photographers.” EnFoco is a non-profit organization with an honorable mission to promote the work of  U.S.-based emerging photographers of African, Asian, Latino, Native American and Pacific Island heritage.

“It means everything,” Montes said of being recognized by EnFoco.

A Latina native of the Bronx, Montes’ black and white project called “My Beloved Bronx” features the community in and around Simpson Street where she grew up. Montes originally applied for a fellowship through EnFoco, but when it didn’t work out she later received the news that they wanted to recognize her as one of the Bronx’s next generation photographers.

Her journey and inspiration to creating this project comes from the book “In The South Bronx of America” by Mel Rosenthal who shot a series of images in the 1970s to describe the abandonment of the borough.

“I have no experience of this Bronx and have only known from asking my mother what are these piles of rubble?” Montes said. The image that spoke to Montes was one of her neighbor’s son with his baseball team standing over a pile of rubble, which she explained to look like a “warzone.”

“It was like a call of action for me to photograph what was happening and what remains in the neighborhood, how thing have changed and highlight what is great about it,” she said.

And Montes’ photos definitely portray that. Young children running in front of graffitied walls, teenage girls hanging out on the sidewalk and a woman hugging a child in front of a mural of the Virgin Mary depict just a few of the real human figures she thinks truly represent her Bronx.

“Abigail’s photographic work on the Bronx is one of the most beautiful and sensitive documentations of a neighborhood that I have ever seen,” Belenna Lauto, professor and chairperson for the department of art and design said. “Her love of humanity is present in every image and her work makes us feel her passion as well as the beauty of those she photographs.”

Associate Professor of Photography William Morel said, “Abigail’s recognition has made us very proud but it also comes as no surprise.

Her photographic work exemplifies the documentary tradition with arresting images and meaningful content. Her images speak of the heart of her community, portraying the closest of relationships and the experience of growing up in the Bronx, from the perspective of someone who understands that well,” he added.

Montes wants to break the stigma that the South Bronx has been given and wants their story to be told by one of their own.

“I don’t want anyone else telling our story, I want to do something that includes everybody like a collective photo album,” she said.“It means a lot to me because there I was trying to make this happen, putting in all my energy into this success and not getting anywhere and feeling tired. Then getting the sign that I’m on the right path here at St. John’s and having that opportunity to grow this project has been incredible,” Montes said.

The opening reception for the project is March 1, 2017 from 6-8 p.m. at the Executive Ballroom, Andrew Freedman Home located at 1125 Grand Concourse in the Bronx. The exhibition dates are Feb. 24- April 5, with a closing reception.

“I’m just very grateful I am at this point because I have such big dreams,” Montes added.