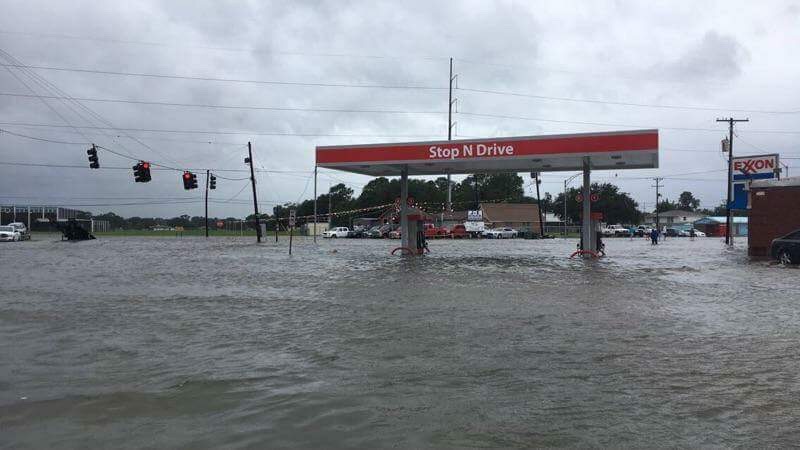 A gas station became inaccesible due to rising floodwaters.

In the midst of Hurricane Harvey and its watery aftermath, SJU students from impacted areas are finding ways to cope with the devastation brought by the storm and reflecting on its impact on their communities.

In what has become a record-breaking storm, Hurricane Harvey’s death toll now stands at 70. Texas Governor Greg Abbott (R), estimates damages from the storm to be anywhere from $150 to $180 billion, making it costlier than Hurricane Katrina.

The Torch spoke to students Cole Bracey, Alison Preston and Linnette Ngohuynh, native to Southern Texas, and they all agreed that one of the most difficult parts of it all is being in New York while their families back home are dealing with the storm’s aftermath.

“I was afraid for my grandparents since my grandfather is in the hospital,” Bracey, 20, said. “My grandmother stayed with him during the storm.”

As the fourth largest city in the United States, Houston prides itself in being a destination point for people all across the country.

St. John’s recruits students from Texas every year, and boasts about 1,000 alums in the state alone.  Bracey, a public relations major from central Houston, says that his community was hit very hard, but that his home had little damage.

“My family lost electricity and the generator went out soon after,” he recalled. “My aunt will be out of her home for about two weeks due to some water entering her home and mold growing.”

Bracey says that although many homes in his community faced little damage, the streets were flooded leaving people stranded in their homes.

“My sister had to be evacuated from her apartment while the streets were already flooded,” Bracey said. “So my parents showed up in a canoe to rescue my sister along with my niece and my nephew.”

Bracey’s father is a physician in Texas Medical Center, the largest medical center in the world, which also happens to be in Houston.

He said his father was busy tending to patients in the days after the storm.

“He told me that it was really really difficult to get outpatient work done which is something that is hard to deal with when so many patient need assistance,” he said.

Preston, 20, said her home faced little water damage. She admits she wasn’t worried about the storm when she first heard about it because Houston has a history of flooding.

“My aunt’s house in Port Arthur, Texas was flooded out and the family had to be air-lifted away,” the biology student said. “None of my friends or family evacuated, but after the storm some had to relocate, and a couple of my teachers lost their houses.”

Preston’s father is in the police force in Houston, the fifth largest police department in the country. She says that she is glad that her father is safe, after the Houston Police Department suffered a tragic loss during the storm.

“My father lost a close coworker who was reporting to work during heavy rain,” Preston said.

“That impacted me a lot because my dad was on the force for around the same number of years as him.”

The officer, Sgt. Steve Perez, died after his patrol car was caught in floodwaters.

“It could have easily been my dad in his situation,” Preston said.

Ngohuynh, 21, a Houston native who lives in a city southwest of Houston, said her family is doing well.

“My mom and dad said there was a lot of rain and my sister said a tree almost fell down on her,” the junior recalled.

Ngohuynh says that there was a lot of water slipping under the cracks of the doors, so it was difficult to keep the house dry and keep belongings protected.

“Last week, I was on the phone with one of my cousins and he was telling me that half of his car is filled with water,” she said. “He had to call me back because the rescue team was coming to his house to talk about evacuating the area.”

Ngohuynh said that some of her extended family members who also reside in the area had to evacuate north to Dallas because water levels began to rise.

The toxicology major says she’s thankful that she was able to fly up to New York in time for school before the storm blew parts of her community underwater.

She said that post-Harvey, her family is now facing another deterrent.

“Not all insurances are willing to pay for the damages left after the storm,” she said.

Ngohuynh’s family is now left to rebuild with limited funds from their insurance company.