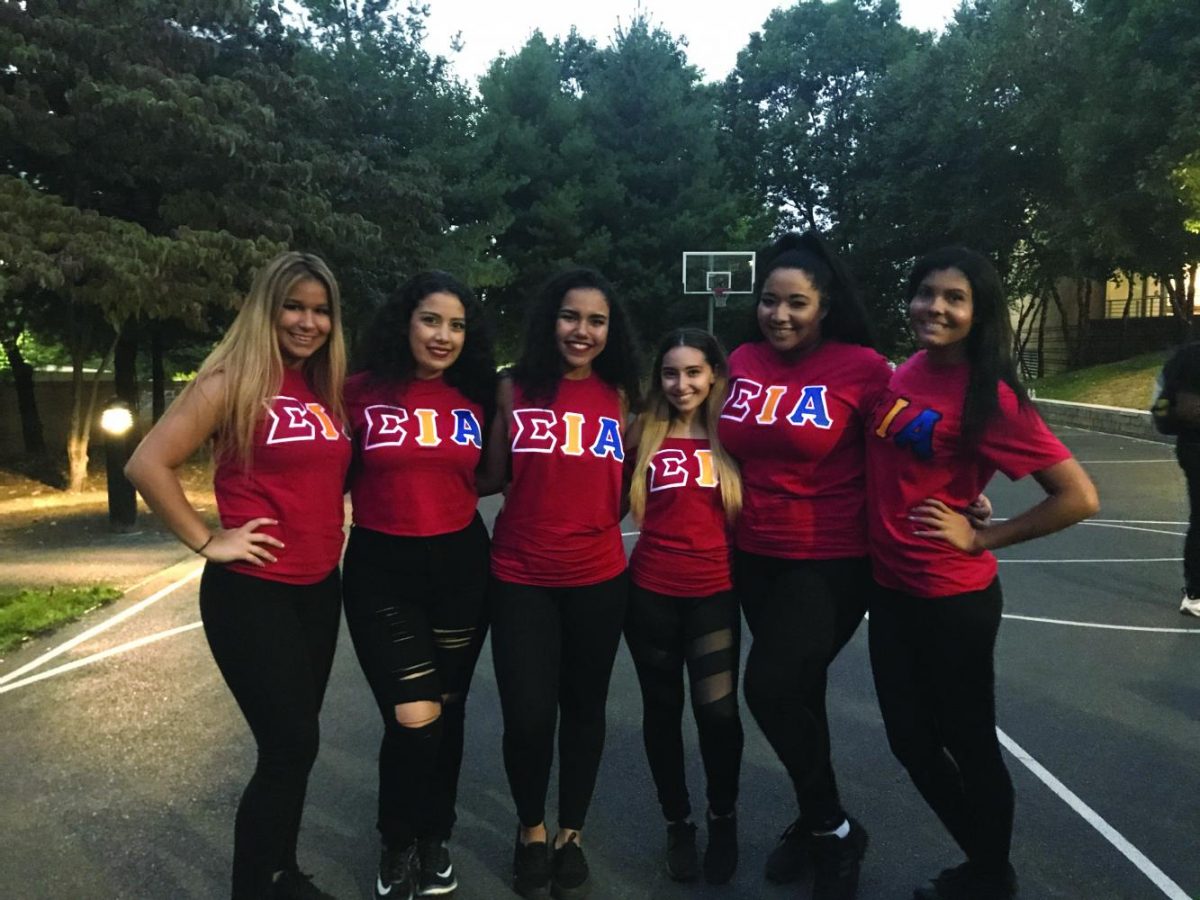 Sorority sisters of the Alpha Theta Chapter of Sigma Iota Alpha pose on the basketball court near Montgoris’ Patio.

Sisterhood comes before anything else in this sorority, which is why they call themselves “hermandad de..” meaning “sisterhood of” in Spanish.

Growing up, sophomore student Erika Madera didn’t have any sisters. However, after getting involved with Greek life on campus, Erika now can’t imagine her life without Hermandad de Sigma Iota Alpha, Inc. (SIA).

“I’ve bonded with girls who can understand me and my struggles, especially as a Latina,” Madera said. “But I’ve also gotten to grow with a group of girls from different walks of life that I never would’ve met without joining a sorority.”

The sorority’s mission is to strive towards the expansion of the Latino culture, and to their members and the community at large.

“We aim to promote sisterhood and leadership amongst ourselves,” the sorority’s president, Amanda Espinal said. “And to serve as models of excellencies academics and achievement among women.”

“We have two philanthropies, in particular Camp OneHeartland, which is a camp for children affected with HIV/AIDS,” Espinal said. “We hold fundraisers for this philanthropy and send them money.”

SIA also partners with Children’s International to sponsor a child in a Latin country.

“We  send them money along with letters for communication to see their progress in life,” Espinal said.

One of Madera’s favorite parts of the sorority is her ability to give back.

“I enjoy simply knowing that I had the chance to help someone,” Madera said. “I can help make someone’s life a little easier or more enjoyable I feel like I’ve done a good job.”

Aside from their contributions to the community, the sorority also hosts cultural, social and academic events on campus. When they have down time, they enjoy traveling to different campuses to meet their sisters.

Smaller than most sororities on campus, senior student Zoe Young says they find a way to “make it work.”

“We each pull our one weight because not only do we care about our sorority but we truly care about each other and want to be there for one another and become successful as an organization together,” she said. “We have truly found people who we trust and love because regardless of our differences we share the same morals and ideals which keep us together.”

This Latin Heritage Month, the sorority is taking time to observe the importance of celebrating one another and those who came before them.

“Latin heritage is our sorority’s background, so it is important for us to understand the different ins and outs and be well informed on Latin Heritage,” Espinal said. “It is important for every member of our organization to learn about the differences in such and know that even though we are all Latina women we each tend to share different cultures of Latino heritage”

Young says that it is important for every member of her sorority to understand the importance of Latin heritage.

“Being that our organization is predominantly made up of Latina women of different cultures it is important for every member of our organization to learn about the differences in such and know that even though we are all Latina women we each tend to share different cultures of Latino heritage,” she said. “We are a Latina based but not Latina exclusive sorority so our sorority was created on the back bone of thirteen strong, independent, Latina woman with similar morals and goals for developing an organization.”

SIA will be participating in a number of events on campus during this Latin Heritage Month celebration and invites students to join them in learning about the Latin culture.