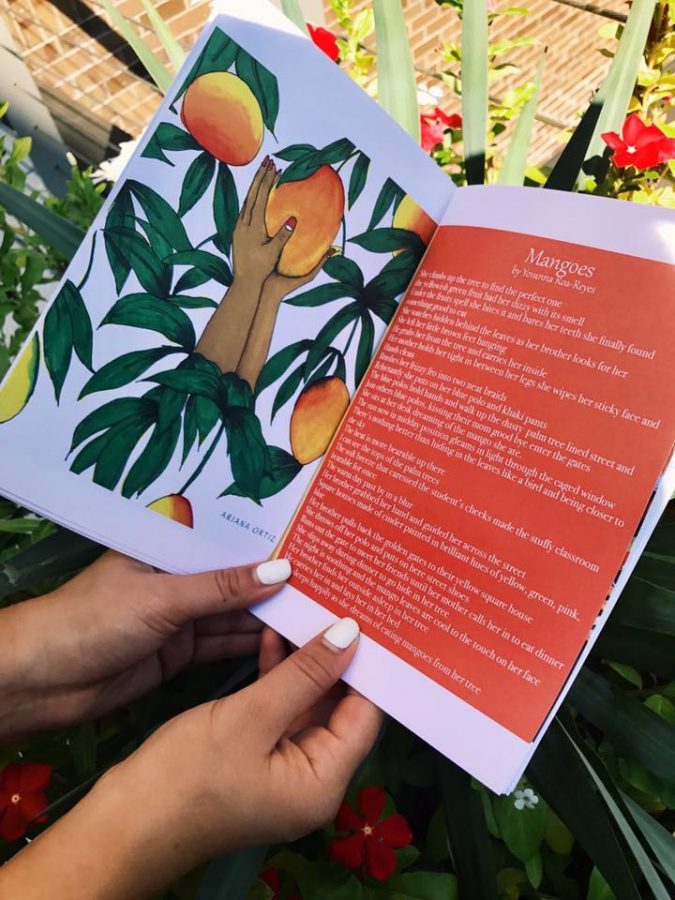 Mujeristas Collective's zine, published in the summer of 2017.

For those who are not familiar with Spanish — and even for those who are — the word “mujerista” may be new. A group of St. John’s students called the Mujeristas Collective aim to bring the term and the ideology behind it to light.

According to the Mujeristas website, their name was created by Ada Maria Isasi-Díaz, a Cuban activist and theologian who was inspired by womanism to construct her own experiences and perspectives that allow Hispanic women to relate and feel recognized.

“For me, womanism gives room and a voice for women of color to be heard and represented,” Aliaga explained. “I never really saw myself in the feminist movement and the feminist readings by white women.”

Aliaga credits her theology professor, Erin Kidd, for introducing her to Isasi-Díaz’s book.

“We read ‘Mujerista Theology,’ and I was just amazed that her work isn’t well-known,” Aliaga said. “Our work is based off hers, her mission too was to provide a platform for all kinds of Latinas, not speaking for them, but allowing them to speak for themselves.”

Professor Kidd explained that she assigns “Mujerista Theology” readings in her Women and Theology class because in her writing, she connects religion and social justice, as she writes that “to struggle for justice is to pray.”

“Isasi-Díaz engaged in this struggle her whole life — through her activism in the women’s ordination movement [a movement within the Catholic community that advocates women to become priests, deacons and bishops], her fight to make that movement more inclusive of women of color, her development of a theology distinctively for Latinas in the U.S. and in her ministry and preaching in East Harlem,” Kidd said. “I wanted to invite my students to think about the sources of theology as not only including texts, but also the lives of the poor and those in solidarity with them.”

Kidd finds Aliaga’s inspiration from Isasi-Díaz “wonderful,” and commended her for taking action.

“In founding this collective, Stephanie is responding directly to Isasi-Díaz’s call to struggle for justice, and I think it is fitting that she is honoring Isasi-Díaz in the name of the group,” she said.

Mujeristas falls under the former, as they strive to create politically and socially aware art, organize workshops and discussions about topics that affect their everyday lives as well as take on activist roles in their communities.

Some of the topics Mujeristas pays special attention to are: feminism, being of dual heritage, sexual identity and “white passingness,” among many others.

“There’s just a lot of conversations I can’t really have with my family because of my identity; and with my friends who are Latinas, we’ll talk about it occasionally but it’s a very casual thing,” Aliaga said.

“I want to hear people’s experiences, that I’m not the only one going through that, how they feel about certain situations and their identity — maybe theirs is more complex than mine.”

“These are important conversations to have,” she added.

The Mujeristas Collective, like many others, give those who they see as underrepresented a platform where they can have their work published and appreciated.

They create “zines,” — which are self-published works of art — that span from artistic booklets which include original poems, drawings and pictures, to pins and stickers with common phrases and symbols.

Zines are used to collaborate with artists within the group as well as outside of it, in order to showcase and support those who otherwise don’t receive any. For Mujeristas, the artists they like to focus on are those of color.

“There are really no rules when it comes to zines, you can do everything,” Aliaga said.

They also participate in Zine Festivals, where collectives throughout New York City gather to sell theirs and put on a show for guests.

“I found out about a whole zine community in Brooklyn like two years ago,” Aliaga said. “It was The Bettys Zine festival and I vended mine there — and I was just amazed at how big the community was which was mainly women of color.”

The Bettys is another New York City-based collective that Aliaga credits for offering her advice on how to run business and grow their platform.

The Mujeristas’ first festival, which they called “Nosotras” (meaning “us”), took place on Sept. 15 in an intimate space in Bushwick with about five collectives joining them to vend.

Not only did they host  and sell their own original zines, but they also conducted poetry readings, comic readings and other performances.

Most of the performers spoke about what it meant to be Latina or Latino, and Afro-Latina or Afro-Latino in America, their cultures, family dynamics and breakups.

Mujeristas is a non-profit organization, therefore, whenever they turn a profit, it goes back into making more zines and organizing festivals. Aliaga wants to see these happen more often in NYC.

“I feel like there aren’t many events with Latinos and Latinas coming together and having a discussion, compared to what’s going on in LA where they’re just booming with events and a huge community — why isn’t that happening here?” Aliaga said. “We can do it here too.”

“Being able to talk about your experiences as a Latino-American, because it can be conflicting and difficult to share these feelings with our peers and family members,” she said.

Although they are a new group, Aliaga said she is overwhelmed with how much it’s flourished.

“I’m curious to see how much it can grow; these past few months have been pretty amazing,” Aliaga said. “I didn’t think we could have our own zine fest … Now we’re working on the next issue and our follower base is growing with people reaching out to us and knowing who we are.”

The Mujeristas Collective will be joining forces with the Latino American Student Organization (LASO) on Oct. 19 during a Mercado (or Street Fair) event in DAC 128. The fair will include “other local Latinx artists and craftsmen to share and vend some of their work.”