Student Takes a Modern Twist on a Bookstore Favorite 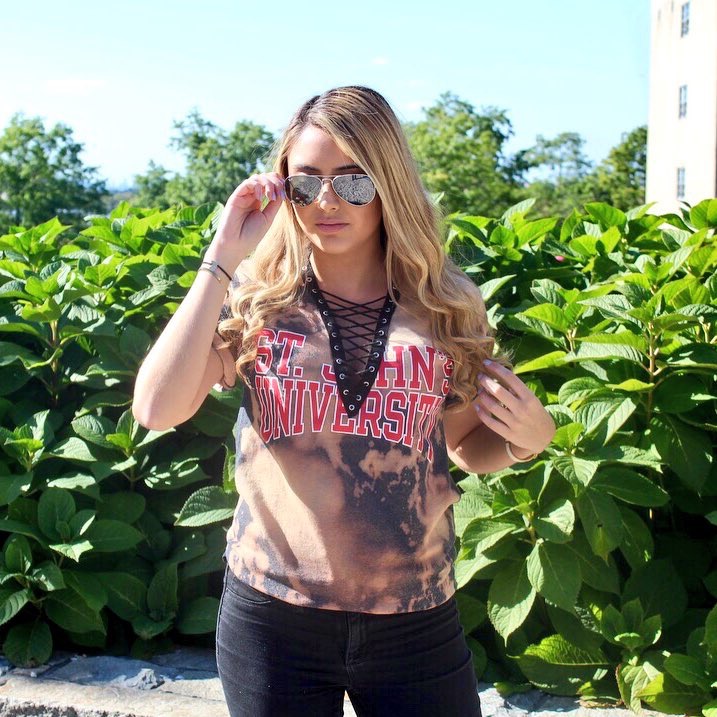 The start of a new school year is a great opportunity to play up your style with new looks and splashes of color. Trends today include moving away from traditional styles and opting for lighter, fresher hues like pastels, adding an edge to almost any look.

One St. John’s student took something as basic as your everyday red crewneck tee, bearing the St. John’s logo, and decided  to take a modern twist on the design.

Junior student, Melissa Rocco’s t-shirt customizations started to garner popularity when friends and strangers alike would compliment her tops in class and around campus. She then took to Instagram and Facebook to showcase her designs and received even more feedback.

Something that started out as a leisure activity has now turned into a part-time business for Rocco, who already juggles two part-time jobs.

She now receives more shirt orders than she ever imagined she would only after about two weeks in business.

“I would go to class and my friends would put me on Snapchat and they’d say ‘tell Snap you made the shirt’ and people wouldn’t believe me,” Rocco said. “And I would say, I literally sat at home on my bed and like, I made it myself.”

The Communication Arts major says that she had about two dozen orders for tip-off alone.

“I wanted to take something that’s already popular, like St. John’s t-shirts, everyone has one,” she said. “But I wanted to make it more modern and more trendy.”

In the spring of 2017, Rocco did the Discover the World: Europe Program.

During her time in Rome, she took a weekend trip to Milan, where she discovered her interest in taking fashion risks.

“After walking around and seeing how people were dressed in one of the fashion capitals of the world, it just made me like I appreciate the risks that people take in Europe,” Rocco said. “In America, everyone’s so worried about standing out and everyone just wants to be part of what’s popular.”

Rocco’s business isn’t limited to St. John’s campus. Despite its early age, she says she’s been hearing from a number of sports teams and groups.

Excited at the direction that her business is heading in, Rocco says she is now looking to debut new designs closer to the holiday season.

“If you have a little sister or friend that you want to get a present for, I think my t-shirt would be the perfect gift,” she said. “I would also love to make shirts for frat and sorority recruitment.”