Freshman captures the attention of many at annual Tip-Off 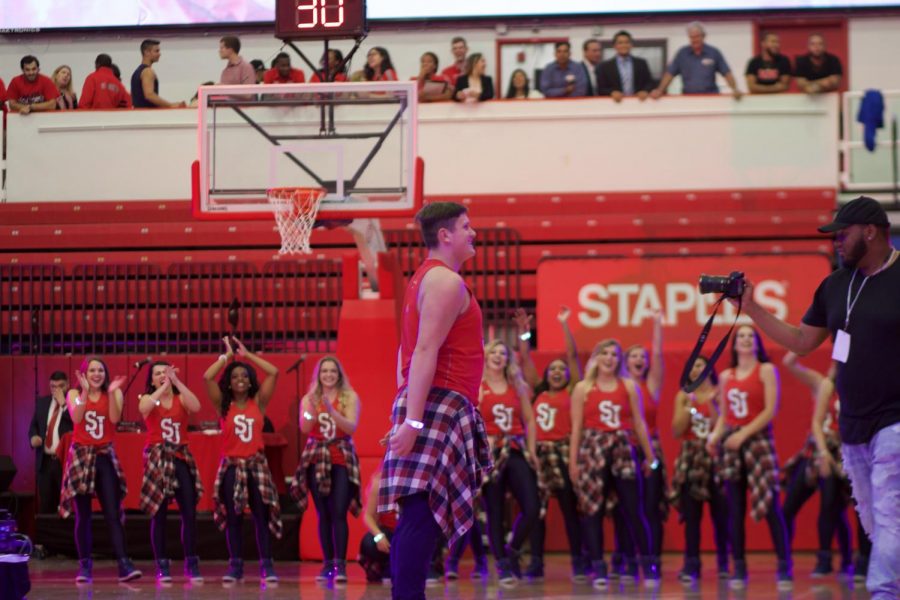 Matthew Kirschenheiter, freshman, does a dance routine on the basketball court for this year’s Tip-Off.

On October 13, the St. John’s Dance Team performed at Red Storm Tip Off at Carnesecca Arena on the University’s Queens campus. For most, it would be the first time you may have gotten a glimpse of freshman, Matthew Kirschenheiter, who is new to the dance team this year.

The Long Island native began dancing when he was 4 years old.

“I started because my sister was dancing,” Kirschenheiter said. “I always [played] sports, they tried to make me play sports and I was like: No, I want to dance. So I kept dancing.”

Kirschenheiter’s mother is a special education teacher. He shares the same interest.

As a first-year student, he made a switch from having a government and politics major to childhood education.

“I just always liked working with kids and I just [want to] really focus on special ed,” Kirschenheiter said. “That’s what my concentration in my masters degree will be in.”

In eighth grade, he began teaching dance, which expanded to his pastime of teaching both regular and special needs students how to dance.

“I chose St. John’s because it had the major that I was looking for, it was far away but close enough to home and they have a great dance team,” Kirschenheiter said. “It just felt like home.”

The St. John’s Dance Team has been in existence for more than 50 years according to the University’s Athletics. Tip Off is one of many events where the dance team makes an appearance.

The dance team competes annually at UDA College Nationals according to the University. They were crowned “National Champions in Division 1 Hip Hop in 2016.”

“I can’t wait to do the nationals with them; this is my first time with a college team. So it’s like really cool.”

“All of them have been dancing probably since they were 3 to 5 years old and all of them danced at studios before and they all have different degrees of ballet, jazz and hip-hop training,” McCarton said.

Although Kirschenheiter is the first male to be on the dance team in the past two seasons, he is not the first one.

“We’ve had a few actually,” McCarton said. “There were three prior, then him.”

Having Kirschenheiter adds a different dynamic to the team.

“It allows us to do different types of tricks because Matt is tall and he’s strong so he can base somebody in a lift by himself,” McCarton said.

“It does allow us to do some other types of things that we wouldn’t get to do, and [overwhelmingly] every time we have a male dancer on the team the crowd [always] seems to gravitate to them, which is really nice too.”

The team worked hard on their dance routines, especially those featured at Tip Off.

In addition to McCarton, Kayla Tarver also thought the dance team had a great performance.  Tarver, a  junior majoring in Radiological Sciences, thought highly of Kirschenheiter.

“Their synchronicity was on point,” said Tarver. “It was fun to watch. I did notice [Kirschenheiter], he was pretty much the center of it all.”

One of Kirschenheiter’s fellow dancers, Natalie Affenita, said she enjoys dancing alongside Kirschenheiter. As a senior on the team, Affenita says she’ss had the opportunity to dance with a co-ed team twice during her time at St. John’s.

“Matt is always encouraging me through the dances and I absolutely love it,” Affenita said. “Overall, Matt is an amazing addition to the team and I can’t wait to see what the future holds for him.”

At Tip Off, Kirschenheiter was singled out by moderator, Paul Gee, to show a few of his dance moves.

“I think he was fantastic!” Tarver continues. “I love that he feels accepted to do what he loves and do it well. And that death drop was everything!”

As Kirschenheiter continues his journey at St. John’s, he says he hopes to continue working on the dance team, to learn new tricks, and to help the team win big.