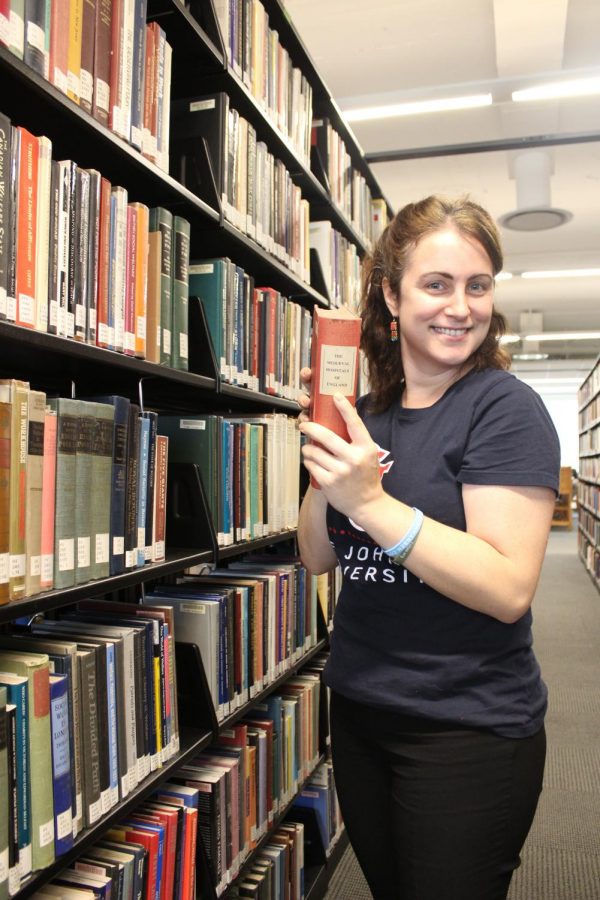 Hanging on the wall in her new office is a kid’s crusader set Halloween costume. The set features a plastic shield and two criss-crossed plastic swords, an ensemble consistent with her love for medieval studies.

Born and raised on Long Island, Ball has aspired to be a librarian since she was just four years old.

“I card cataloged my Beatrix Potter books for my stuffed animals,” she recalled.

Ball attended New York University (NYU) where she started out as a math and physics major on a pre-med track, then switched her major to medieval studies.

“When I was interested [in medieval studies] and I switched over, the thing that made the transition easier for me was I started with Latin,” she said. “Latin is like math in a language form. There’s always rules if you know how to parse the words, you know the exact answer.”

She then furthered her education by attaining her first master’s degree in medieval studies from the University of Glasgow, and then received a dual certification in archives and preservation from Queens College.

Ball’s career-path didn’t navigate as planned; after she decided to pursue her second master’s degree, she took a job at an advertising agency to pay her way through. Little did she know that her job would turn into a 10-year livelihood.

“I went from being a temp receptionist to 10 years later being the global networks research manager,” she said. “I don’t do change well, hence why it took me 10 years to get up the courage and make the leap.”

Ball said she reached a point in her career where she realized that “happiness shouldn’t come at the expense of convenience.”

The Astoria-resident has also dabbled peripherally in academia and libraries for the last 10 years. She has worked at the Library of Congress, the Morgan Library & Museum in Murray Hill and taught information literacy at ASA College in Herald Square.

Ball’s new role at St. John’s includes observing retention rates and graduation rates data at the University, reaching out to first-year students, working with the library for the benefit of the students, teaching students how to use resources at the library that they didn’t know existed, and ultimately, ensuring student success.

“I’ll then see how the library can put forth initiatives to kind of bump those numbers up and increase our graduation rates,” Ball said. “I’ll look to see why students may be leaving or may not be completing on time and trying to help them in their outcome.”

Ball will also be working alongside other centers and institutes on campus, including the Office of Institutional Research, to try to assemble different information. After gathering such information, Ball will then put it together into a narrative that will translate well for student success.

Ball said she knew she wanted to jumpstart her career in libraries at St. John’s because of the University’s mission.

“It’s really important to me,” she said. “It was always one of those places that I aspired to work at too.”

When Ball isn’t indulging in medieval literature or watching a movie, she’s planning trips for herself and her friends. She’s been to every continent except Australia and Africa — both of which she plans to visit soon.

“Traveling gives you a more well-rounded perspective,” Ball said. “I think it’s super important to see other people’s perspectives and see the same issues or problems through different eyes.”

Ball said she encourages students to take advantage of the study abroad opportunities available, stating that it is one of the best decisions that she’s ever made.