Club talks its beginnings and the future of virtual reality at St. John’s. 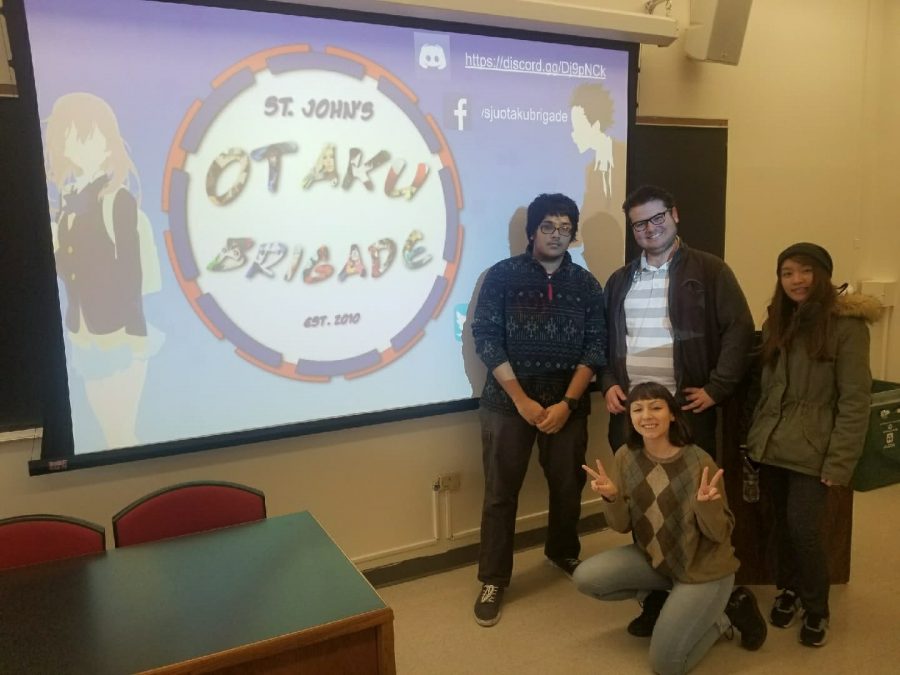 Consisting of TVs and game consoles (and attracting many gaming aficionados), the unofficial gaming station at the long tables on DAC’s second floor has become a familiar sight to the University community.

You might be asking yourself: who are these guys? With over 300 active members, Otaku Brigade stands strong with its family of manga, anime, cosplay and video game enthusiasts.

At their Feb. 8 general body meeting, Academic Technology Director Eric Alvarado came and discussed getting school funding for gaming, particularly in an educational and competitive aspect through the use of virtual reality (VR) devices and games such as Super Smash Bros; Otaku Brigade will be taking a front row seat in this innovation exploration.

The Torch sat down with Otaku Brigade’s executive board members including its president, Amanda Carlson; vice-president, Nafis Mukut; secretary, Jonella Wong; and treasurer, Armando Cendali on this unique organization’s growth throughout the years and its plans for the future.

Q: What is Otaku Brigade? What’s the mission behind it?

Carlson: Otaku Brigade is an organization that supports any and all nerdy hobbies, mainly anime, video games, comics, manga, sci-fi, cosplay. It’s also a special organization dealing with inclusion since those kind of hobbies are kind of isolated and there’s a lot of stigma around them.

Cendali: It’s a place for nerds to be nerds and not be judged. It’s nice, it’s fun, it’s relaxing, it’s great break to relieve stress at the end of the day and make friends in college.”

Q: Where does the name “Otaku Brigade” come from and how did it all begin?

Carlson: Otaku is kind of a derogatory word in Japan. It’s supposed to mean someone who sits in their room all day and doesn’t have any social interaction and is obsessed with one thing.

Cendali: And brigade sounded better off the tongue than Otaku Organization.

Carlson: Otaku Brigade has been around for eight years — it was established in 2010. It started because of the people at the DAC tables. They were just playing video games and liked anime, and then a bunch of friends were just like “Hey, we should make a club.”

Then it got to be bigger where it wasn’t just a group of friends and it was really a professional club that’s trying to erase the stigma that nerdiness is just for weird kids.

Q: What past events stand out for you guys? Which ones have been your favorite?

Mukut: Like when our Event Coordinators did a Christmas Twitch stream to raise money.

Carlson: But my favorite event is the Maid Cafe. I think it is stigmatized a bit because members are dressed up as maids and serve other members. Occasionally, some of our male members also dress in maid outfits, which creates a backlash.

Mukut: They’re just jealous we look good in it. Ota-Fest and Aki-Fest both fill the same role as the end-of-semester events for hardcore members. It’s a great way to celebrate how far the club has gone each semester, and it really gauges member interest.

Carlson: Aki-Fest and Ota-Fest are like our mini-Comic Cons where we have a theme, members create booths for those themes, they serve food, and we just have a good old nerdy time!

Carlson: It’s a huge community effort. Everyone brings their own TVs and games and systems and we all experience different games: individual, RPG, multiplayer, party, card, board —

Mukut: Any game. And I don’t think we’ve ever hard any reports of thefts.

Cendali: We do have safeguards, but nobody has ever done anything.

Carlson: There’s just an incredible amount of respect and care between people.

Q: How have you dealt with negative stereotypes concerning the org’s “nerdy hobbies”?

Wong: Yes, we have been cast with it. Like, at the Activities Fair. Amanda and I were in cosplay and people would just, like, pass by and be like “What kind of club is this? Who does this?”

We did embrace it in a professional manner — it’s something we all enjoy, something that we do, and if we get judged for it, it’s fine as long as it makes us happy. And we all have each other’s backs.

Q: The school has reportedly been testing VR to become a part of its curriculum, like giving Forensic Science majors a chance to simulate crime scenes in real time. Have you dabbled with VR technology like the Oculus Rift for your organization?

Mukut: It’s all brand new. We are planning to. Eric Alvarado extended a hand out and invited our organization for a tour of the future VR set he’s hoping to get in soon.

The thing is he’s creating an academic reason for it. We can’t just use technology for entertainment purposes. It’s going to be within this semester or next semester.

Wong: We could definitely use it as a real life simulator. I know people are actually using it, like doctors-in-training, so St. John’s could actually benefit from it.

Mukut: Yeah, it’s not just for art. Once this program is in for STEM majors, it will definitely help them out.

Carlson: But, as of now, Otaku Brigade has not yet used it for educational and recreational purposes.

Q: Going forward, what are Otaku Brigade’s plans with e-sports (competitive, multiplayer video games), particularly when it comes to possibly making it a part of the Athletic Department?

Mukut: A lot of universities have e-sports because they have a game-centric education, a game-centered program.

Carlson: And we don’t have that… yet.

Mukut: In the future, if St. John’s has more of a focus on gaming, then we as an organization could reach out and offer to support people through it, but right now, it’s hard to say.

Carlson: I can’t even imagine if e-sports worked at St. John’s that they would be attached to the Athletics Department just because of how niche it is.

Mukut: Universities anywhere, they have a dedicated department to gaming and e-sports. It isn’t just student-driven: It’s administration-driven.

Carlson: I think it’s possible, but not in the next year or two. (laughs) Probably five years from now.

Q: Would you guys be open to having your own “Otaku Circuit” for gaming?

Cendali: In our gaming committee, we tried toying with that idea for a little bit, but it’s still in its early stages.

Q: How do you feel about the ongoing debate concerning e-sports are a “real sport”? Do you consider e-sports a sport?

Mukut: Of course. The idea that sports is something that has to be physical isn’t really applicable anymore with things like VR.

It’s being considered for Japan’s Olympics. You may not agree with it, but you have to recognize where it’s due.

Cendali: Yes, like chess is a sport, but it’s not physical: it’s mental. Videogames are a mental sport, too, and people in e-sports agree that it’s a mental gymnastics throughout the entire thing.

Q: What about getting that idea across here at SJU?

Carlson: I think by society’s standards, sports is a very physical action. Nationally and worldly, it’s there, but I don’t think SJU is there yet.

Getting e-sports here and with Otaku Brigade will take a while, but the motivation is there. We just need marketing and help from administration.