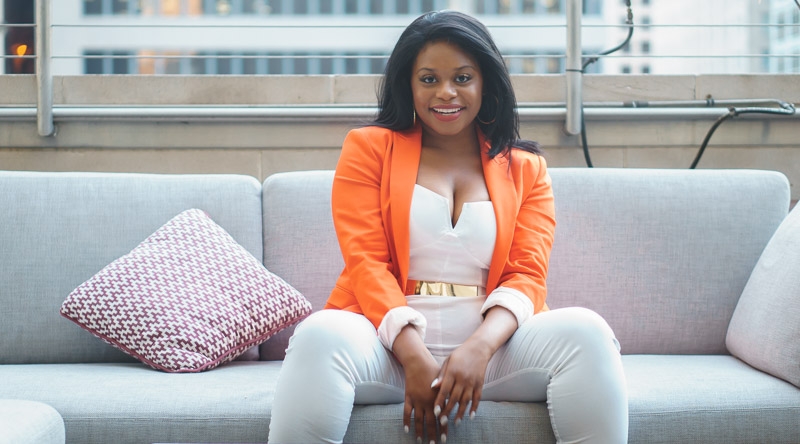 Being away from home for college puts a lot of pressure on students. Nyla Smith, 22, came to St. John’s prepared for that pressure, on top of the challenges that her mental and physical disabilities sometimes present.

But she didn’t let that stop her from succeeding. She graduated in 2016 — she says she’s the youngest student to ever graduate from the University at 19 — and now she is the founder and director of her own non-profit to help students who are going through the same thing.

The Hustle Hard Campaign is Smith’s initiative to help students with disabilities. Smith has been diagnosed with ADHD, panic disorder, major depression, OCD and Chrohn’s Disease.

“I spent my first year at St. John’s faking it,” Smith said. She didn’t want to ask for accommodations, even though the culture shock of being away from home was preventing her from doing well in school. “It just wasn’t worth it,” she said.

During her second year at SJU, effectively her senior year, she says she became a “504 student.”

This means that her needs were completely met based on her disability — she took all of her tests in private rooms, was given extra time, had homework extensions, and was not penalized for being tardy or absent from class.

“St. John’s has some of the best resources for those with disabilities, so that helped as a model for Hustle Hard,” Smith said.

One of her sorority sisters had a connection with a high school principal who wanted Smith to speak at an assembly.

Her first speaking event propelled her into what she now calls her ministry. With the help of her family, Smith founded the Hustle Hard Campaign and it became a 501c3 — also known as a non-profit organization — in 2017. The organization creates resources for students with disabilities in middle school, high school and college. Hustle Hard facilitates student-run clubs where they have support groups and raise awareness for the many health issues that hinder the educational experience.

Smith feels that she was destined to do a lot of things, but because of her condition, a teacher told her to pick something other than the sciences.

“How dare you, first of all.” she responded. In high school, she enrolled in a college program at Richland Collegiate in Dallas, Texas, where she earned her associate’s degree in science.

“Being on a community college campus, it was mostly immigrants and first-generation students. They had a different type of hunger. They checked my privilege,” Smith said. She decided that her disability would not be a barrier.

“Whatever God has for me, I don’t have to ‘fight’ for it… I have to be diligent. I don’t believe in excuses.”

Smith says she is glad that God has called her to so many different things.

At Hustle Hard, she wants to make sure that kids with disabilities have someone to talk to, that they have the home and support system that they need.

She says that many of them suffer from trying to fit into a social structure that just isn’t built for them.

As a child, Smith saw herself being a famous actor, an author or a scientist. She wrote poems, starred in school plays, and did science experiments with her mother at home.

“I’ve always been a nerd,” she says, adding that her learning disabilities never stopped her from entering St. John’s, degree in hand, and graduating at  the age of 19. Now, she’s just been accepted to a medical program at the University of Vermont.

Despite the new journey, Hustle Hard is still her primary project and she sees the organization in every school in the U.S., with multiple partnerships with educational companies.

“People have to put their health on the back burner,” Smith says. There’s no way that she’s going to let a physical or mental health issue stop students around her from being given the tools to hustle hard.