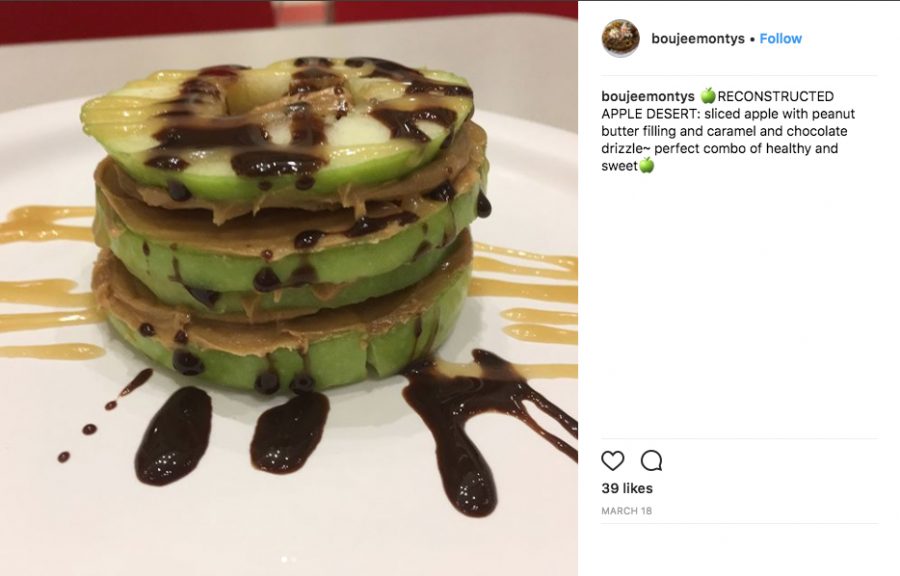 This is what makes Boujee Monty’s (@boujeemontys) one of the most unique St. John’s-centered social media accounts to emerge this year.

Operated by a group of students who decided to remain anonymous, the account offers students hacks and recipes to construct their own “boujee” creations.

The use of the word “boujee,” (slang for “bourgeois”) has spiked in national popularity since the release of the 2016 hit single, “Bad and Boujee,” by American hip hop group Migos. Though the term is usually applied to mock pretentious consumers of high society, its contemporary meaning refers to the affectations, manners, and dress of the upper middle class.

“With eating at a dining hall most of the time, you have to learn to make do with what you have. Monty’s can be way better than you think,” one of the account creators said.

The account posts weekly videos and pictures on Instagram and Twitter using common ingredients available at Montgoris to create what is their idea of elevated, five-star fare.

Each post includes a clever name for the dish along with its ingredients, and encouragement for  followers to construct their own creations and join in on the fun.

Featured dishes include a minimalistic apple dessert consisting of green apple slices layered over peanut butter and topped with a caramel and chocolate drizzle; a combination of fried chicken tenders and waffles for a satisfying brunch platter; and a jelly donut ice cream sandwich.

“It all started one Friday night at the dining hall and we weren’t feeling the food options for that night, [so] we decided to get a brownie and put topping like caramel sauce and sprinkles from the ice cream bar and spice it up a bit,” one of the founders said. It’s this first post of “The Boujee Brownie Sundae” that kicked off the account.

“We were laughing at how boujee we were and that we should post it online,” another creator said. “That’s when we got the idea for Boujee Monty’s. It began more as a joke and now we’ve just kept it up over the past couple of weeks.”

Although the accounts are all about Montgoris Dining Hall, Boujee Monty’s is not affiliated with the University. The Instagram account is known among students as “Monty’s hacks,” and it has over 193 followers as of Mar. 27 —- pretty influential for an account that’s been up for just two months.

“The key to each post is the perfect combination of the right foods, colors, and presentations. The prettier it looks, the better,” one founder said.

“With the dining hall, we get used to having the same food every week, so we have learned to get creative,” another founder said. “We usually like to combine different foods from different locations to make something yummy and trendy.”

The account runners encourage students who have any ideas of their own to message them on Instagram or Twitter for their culinary creations to be featured.

The next time you swipe into Montgoris Dining Hall dreading the same old routine, don’t forget to check the latest hacks from Boujee Monty’s to take your meal to the next level.