Student organizes with March For Our Lives NYC 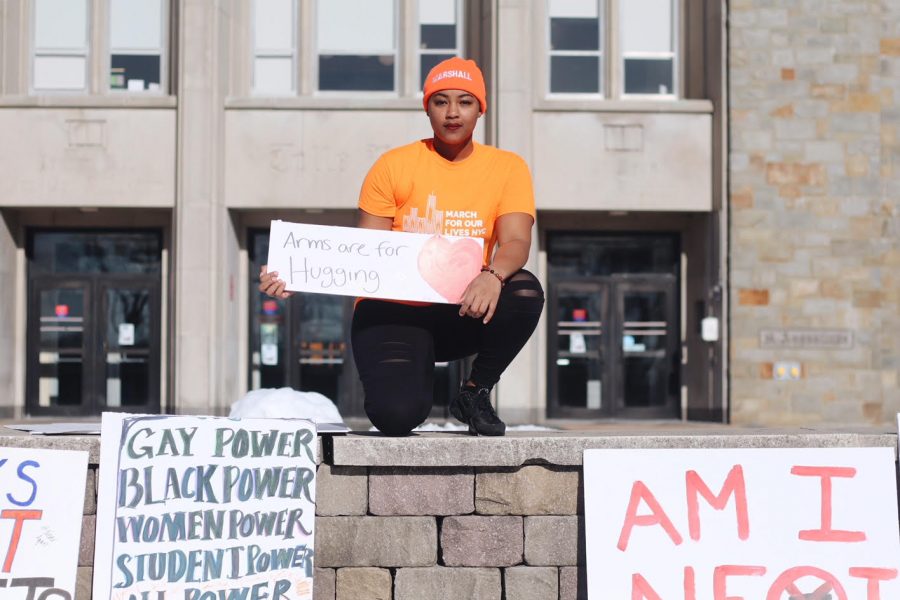 Ashlande LaBranche, sophomore, is a gun control advocate and one of the March For Our Lives NYC organizers.

When sophomore Ashlande LaBranche was still a high school student in her hometown of Boston, Massachusetts, she saw how mass shootings — one after the other — seemed to not only dominate newscasts, but American life itself.

“I think that was the time when gun violence just blew up so much,” LaBranche says. “And I was just like, ‘I can’t sit here and watch it happen, I have to do something.’”

She went from signing petitions and sharing information on gun violence through social media to volunteering at Violence Intervention Prevention (VIP), a Boston Public Health Commission program that aims to reduce street violence in city neighborhoods.

“Volunteering at VIP taught me more about gun violence and the reasons it happens to begin with,” LaBranche said. “I was able to communicate with people who changed their lives after VIP, and I learned the strategies implemented by VIP and Boston Police to get teens and adults off the streets, as well as guns.”

Now LaBranche, 20, is a student gun control advocate and one of the organizers of the NYC March For Our Lives that took place on March 24.

“We need more regulation,” LaBranche said, citing cases of American children accidentally killing themselves and others because of easy access to guns.

Each year, about 1,300 children die and 5,790 are treated for gunshot wounds in the U.S.,according to a study published by the Journal of Pediatrics last October.

LaBranche says that while she understands some citizens’ strong beliefs in the Second Amendment, she wants policy reforms to make it harder for guns to be obtained.

“We understand that we can’t take your gun away — it’s the Second Amendment and we can’t take that away. The message is primarily that we just get it regulated.” LaBranche said.

In a recent video the National Rifle Association (NRA) posted to its Facebook page on March 24, the organization alleges that March For Our Lives is not a student-led movement, but rather a billionaire-backed plan to take away the Second Amendment.

“Today’s protests aren’t spontaneous.” The caption on the video reads. “Gun-hating billionaires and Hollywood elites are manipulating and exploiting children as part of their plan to DESTROY the Second Amendment and strip us of our right to defend ourselves and our loved ones.”

The NRA also posted a video to its YouTube channel on March 22 titled “A March For Their Lies,” where gun rights activist Colion Noir calls March For Our Lives “one-sided, logic-deprived, and intellectually dishonest.”

“I would have to say, the NRA — I really don’t like them,” LaBranche said. “The way they’re getting politicians to support their agenda is immoral, and not only is it immoral, it’s causing those politicians to not even look at their own families and be like, ‘[getting caught in a shooting] could happen to them.’ They’re putting money over humans, I don’t like that.”

“People only say that they don’t support gun control until they become the victims or survivors,” she added.

In the wake of the shooting at Marjory Stoneman Douglas High School in Parkland, Florida that killed 17 high school students and faculty this past Valentine’s Day, student survivors’ organization Never Again MSD and Everytown for Gun Safety collaborated on organizing the March For Our Lives, a national event calling for stricter gun laws.

The main march took place in Washington D.C. on March 24, along with hundreds of “sister marches” throughout the country.

While she has been advocating for tougher gun laws since she was a high school student at Fontbonne Academy in Milton, Massachusetts, even centering her senior project around the issue, she says her journey with March For Our Lives began soon after the movement was formed.

March For Our Lives NYC drew crowds of tens of thousands; Mayor Bill de Blasio tweeted that the “final NYC tally” of march participants was 175,000.

“And this is a movement that has JUST BEGUN. These students WILL change America!” De Blasio’s tweet continued.

LaBranche says the energy throughout the march was “uplifting” and “motivational.”

“Everyone was so happy and proud to be there, but at the same time very serious,” LaBranche said. “The feeling was pretty mutual throughout the crowd…We weren’t here to play. We meant business.”

LaBranche says the diversity of the crowd, coming together for one common goal, was particularly striking.

“That was the only march I’ve seen with such a huge range of people, it was almost like we were all family,” she said. “Everyone was taking pictures together and having long conversations as if we all knew each other for years and had suddenly been reunited.

That will probably be the best and only moment in my life where I’ve seen diversity and inclusion in such a huge crowd.”

LaBranche says that students who care about gun control but don’t know how to begin advocating for it should learn as much about the issues as they can before jumping in.

“Follow those pages about gun control; follow March For Our Lives, or Moms Against Guns,” LaBranche says. “You never know when the time will come that you actually want to put some action into it. And write to your lawmakers, your state and local representatives; it’s a great way to start.”