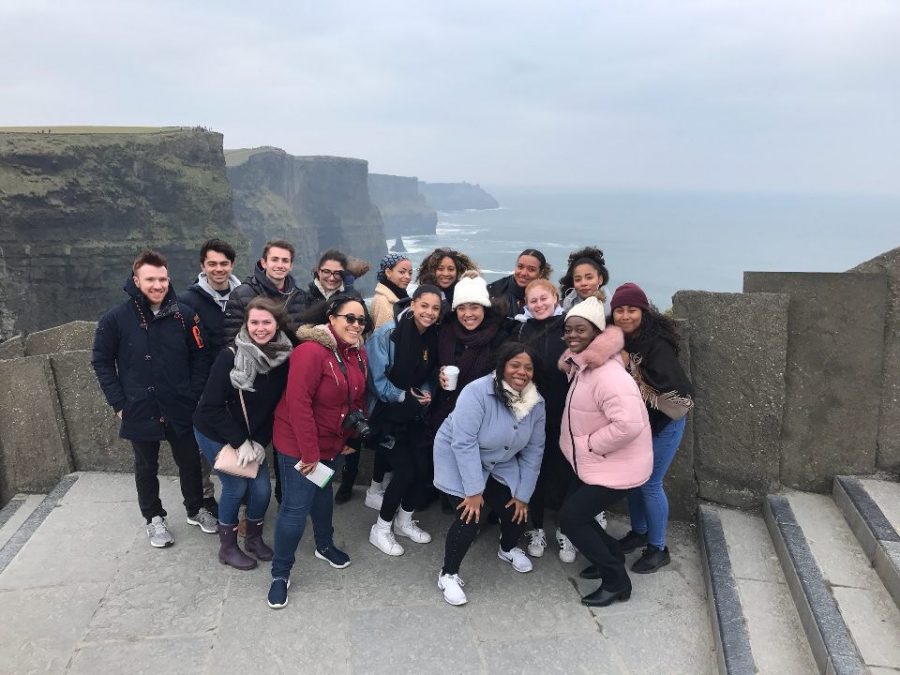 When Limerick, Ireland replaced Seville, Spain in St. John’s Discover the World (DTW) program, there were many questions buzzing around the decision. Students weren’t sure what to expect, and faculty acted quickly to ensure that Seville’s replacement would live up to what students have enjoyed for years.

According to media relations, 198 students spent five weeks in Limerick, a city in the westernmost part of Ireland, as part of their DTW rotation.

From a new module to new housing to a new host university, students in the spring 2018 DTW Europe program were the first to experience Limerick, and had a lot to say about the new addition.

A typical school day in Limerick kicks off with an Irish breakfast at Tait’s Bar and Grill in Pery’s Hotel, followed by a 24-minute trek from the hotel to the Mary Immaculate College. Classes are held in one of the furthermost buildings on campus, Summerville House.

“The campus was very easy to navigate,” sophomore Rachel Fondeur said. “There were always areas to hang out and I enjoyed the people on campus.”

“I think the class schedule and professors need to be changed,” sophomore Elena Napoli said. “I know that attending a different college is a part of the experience and that comes with different standards, but the professors were unaware of the significance of our GPA and grades in terms of our academic standing in college.”

In Ireland, the emphasis on grades is different from American universities, which concerned some students.

Other students recall not remembering the names of certain professors because the schedules were “never clear.” Since one professor taught parts of both theology and philosophy, students say they got the two classes confused and were not clear on who would teach what on which days, and who would grade certain assignments.

“I didn’t like how unclear the transfer of the professors was,” Fondeur said. “I never knew who the next professor was, what I was going to learn that day — I always felt unprepared because I didn’t know what to bring, I felt like I was speed dating teachers.”

Oftentimes, students would walk into the wrong classrooms for class because the schedules were unclear.

The practical part of art class was one of junior Victor Jolley II’s favorites.

“The art class was a good way to get out of Limerick,” Jolley said. “We took a trip to the Rock of Newcashel and a walking tour of the city.” However, many students expressed distaste with the architecture portion of the class.

Sophomore student Grace Burchell said the class wasn’t what she expected it to be.

Tamara Garcia, a junior English major, says she enjoyed the architecture portion of the class, contrary to her classmates’ opinions on the way it was taught.

“I thought Dr. [Judith Hall was very passionate and knowledgeable about architecture,” Garcia said. “I learned how to describe building features and better read building plans.”

Garcia said that for those who are uninterested in architecture, the class could get a bit boring.

After class, some students hung out in the TARA building, which had a lounging area similar to the D’Angelo Center living room in the Queens campus. Others made their way to the cafeteria after classes.

“Lunch was really good,” Fondeur said. “In Limerick, I could find variety and it felt like I was having a wholesome meal.”

Lunch usually consisted of a main meat dish with one or two sides and water. Students could also opt for a hibachi style stir fry or a wrap.

“I think they should look into giving us food vouchers, similar to the ones in Rome,” sophomore  Brendan Farrell said. “Food got expensive and serving us only breakfast and lunch didn’t do the job.”

Students made use of the facilities on campus, taking advantage of things such as the gym and Mary I student-run shows.

“I used the gym at Mary I,”  Jolley II said. “The machines were efficient.”

Pery’s Hotel, located near central Limerick and within walking distance of the bus stations, was the housing available to students studying in Limerick. Students’ rooms came equipped with towels, which are cleaned weekly, refilled hand soap and body wash, tea and coffee. The rooms also came with a kettle, a TV with cable, a few hangers and a blow dryer. Every week, the beds were made, rooms usually vacuumed, with the tub, toilet and sink cleaned as well as the trash taken out.

“The washer and dryers were efficient, but it didn’t seem like the hotel was prepared for a large number of people to use it.” Fondeur said. “I never felt comfortable in the laundry room because the basement was a bit sketchy.”

Limerick’s climate is classified as temperate oceanic, and according to Weather-and-Climate.com, the average amount of annual precipitation is 999.9 mm (39.37 in). In a day, or even an hour, one could experience varying episodes of rain, wind, warmth and hail.

Some students also didn’t like the city at night.

“During the day it was all great, but at night it was uninviting to say the least,” Farrell said, adding that he felt safer in Rome or Paris.

Students were offered dinner in the hotel’s restaurant, where the menu changed daily and ranged from breaded shrimp with french fries, duck rolls with fries or a smoked chicken salad. There were also vegetarian options available.

Dinner for students was 7.50 euros. Students also had the option of a dessert-of-the-day for 3.50 euros.

In a week, students spent about 50 euros on food if they decided to eat in the hotel’s restaurant and in restaurants around town. Since the hotel didn’t have a fridge or a microwave readily accessible to guests, students were unable to store food, which some students believed would’ve helped them save money.

“Limerick was definitely more expensive in terms of how much money had to come out of pocket,” senior Christelle Joseph said. “Unfortunately, because of the fact that dinner was never provided and the lack of food options for the weekends, I spent at least $150, if not $200, on food alone each week.”

The senior, set to graduate next month, said that Ireland was also the most expensive place in terms of traveling.

“Being that it is in the UK territory and Limerick especially didn’t have an airport, we had to pay for a taxi to drive over to the closest airport in Shannon,” Joseph said. “Because that airport had less plane options and was so far from the EU territory in general, our flight tickets were unnecessarily more expensive than it would have been traveling from Italy, France or Spain.”

One thing that all students wholeheartedly agreed on is that they’d never forget the kindness of the people from Limerick, particularly the Mary I staff, who helped students acclimate to the city.

“My first impression of Limerick was that the people are extremely nice,” sophomore Shannon Padgett said. “However, it was quite small and secluded, and the weather was depressing.”

Farrell echoed Padgett’s thoughts, as he said his favorite part of the trip were the people.

“Everybody was just so nice and accommodating,” he said.

“For spring break, I was planning to travel to Morocco and as a Trinidadian citizen, I needed a visa,” Garcia said. “Ben and Breeda helped me by researching different resources and making calls to ensure that I’d be able to go on the trip.”

Thanks to the staff, Garcia said she was able to spend part of her spring break in Tangier, Morocco — one of her favorite destinations to date.

However, Farrell believed that another destination might have been a better option.

“If I could, I’d exchange Limerick for Dublin,” Farrell said. “I was so excited for Ireland but Limerick was so small and secluded, it wasn’t as fun as I think Dublin would’ve been.”