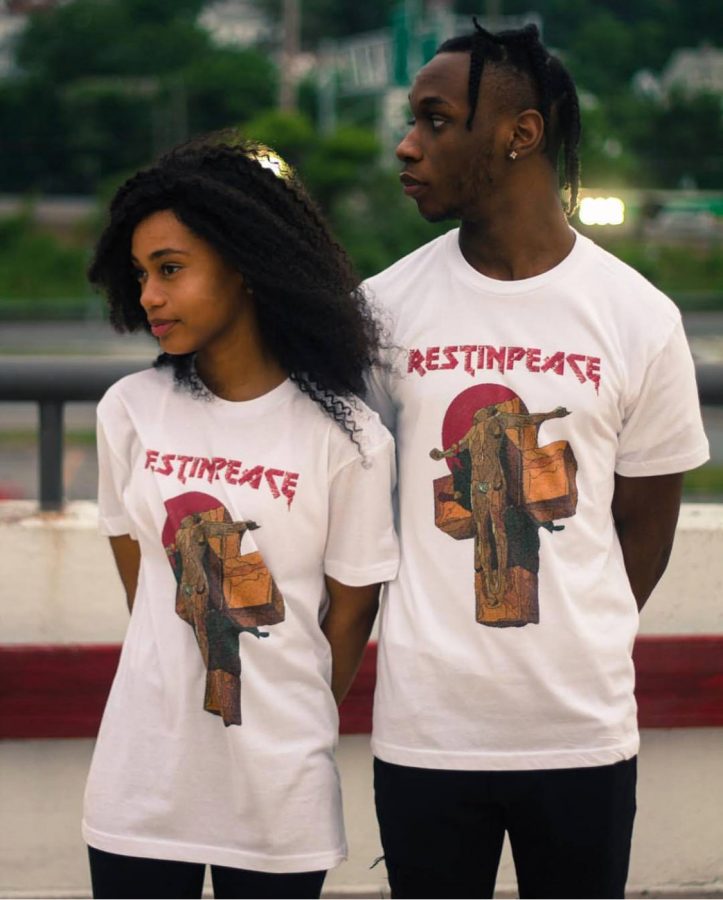 As I sit with senior student Donovan Carnegie-Salmon, he sports the black “Rest In Peace” hoodie from his clothing line YOS (Your Own Society) Apparel. Inspired by Salvador Dali’s oil painting, “Crucifixion” (Corpus Hypercubus), the hoodie draws from the Spanish artist’s aim at changing the way we view Christ’s crucifixion.

In explaining this to me, talking fashion in general, discussing his own line and who YOS and what YOS Apparel are, his awareness, appreciation and application of a myriad of artistry is evident.

When Carnegie-Salmon was in the fifth grade, he recalls not giving the common answers when asked what he wanted to be when he grew up. Instead, he told folks he wanted to be an inventor, because he knew it had to do with making something that wasn’t there before.

Seeing his grandma work on her sewing machine, he never thought he’d do something like that. But at age 16, after years of not being able to find what he wanted [in stores], he said “I’ll make what I want.”

With a little over $200 borrowed from friends and his mom, he set out on making clothes. The first pieces, plain white t-shirts with his logo on them, did not do well.

Out of the 36 made, only five sold. Bringing prices down was the only way he was steadily able to dispense them. This experience left him wanting to give up.

But being aware that this was his first time and of his mistake of naivety, he decided to start studying marketing and pricing. He looked at websites, surveyed friends and other folks in his age group, trying to gauge his target audience.

Pondering how much he should charge led him to look into profit margins, a knowledge indispensable for his and any business.

Upon feeling better prepared, the marketing major began pouring everything into YOS. At first, with no job, he’d save his lunch money and settled for chips to fill him up. And once he got a job, virtually all the money went to YOS.

Carnegie-Salmon went from struggling to sell his first t-shirts to having a number of pieces sold out. It’s clear that both his passion and philosophies (regarding fashion, art and creativity) have helped him tenaciously propel YOS.

And it’s a sentiment echoed by many artists, past and present: “Seeing people in your clothes makes it worth it.”

Carnegie-Salmon wants to inspire people. He believes, “everyone doesn’t have to change the world, [but they can] foster a world where folks feel comfortable enough to have ideas to make change.”

This and another belief, “anything can inspire,” are highly evident in his R.I.P. collection and both the

“I AM A MAN” and Moonchild t-shirts.

Inspired by the loved ones he’s lost, the R.I.P. collection has a piece reluctantly added every time someone passes. The “I AM A MAN” t-shirt was inspired by the signs that read this message, held up during the Memphis sanitation strike in 1968. The Moonchild t-shirt, featuring his own hand, was inspired by a nickname given to him by his mother.

While other mothers might have called their child “sunshine,” Carnegie-Salmon’s called him her  “moonchild.” According to her, he could make a dark day feel bright.

YOS will see its fifth birthday this November, an incredible feat for someone who, though receiving welcomed support from friends, creates all the designs and completely manages the line’s inventory and website on his own.

Beyond clothing, Carnegie-Salmon wants to be a facilitator for any creative to do what they love. YOS, he says, will be something of “a label over a lot of segments of art”.

He wants the brand to be a conglomerate, a space for all kinds of creatives. This could include, but isn’t limited to, those who don’t know how to market themselves.

Because to him, “fashion is art… it’s a way to express yourself… to represent how you’re feeling, to symbolize what’s important to you.”