Check This Alumnus Out 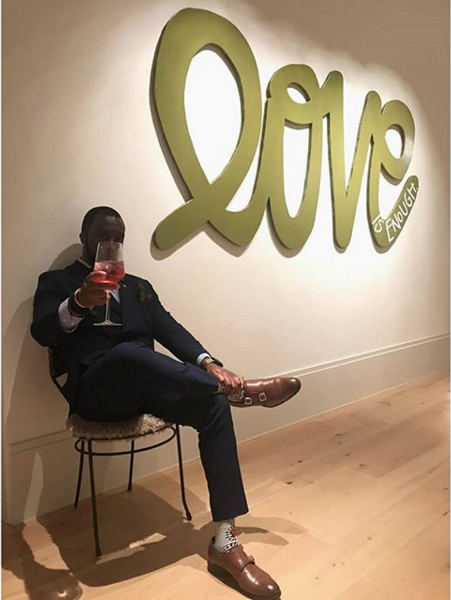 Draper with one of his “LOVE” designs.

Ronald Draper is a 31-year old visual artist and St. John’s graduate. His list of achievements includes being the Director of Contemporary Arts and Culture at Harlem Hospital, co-founding a non-profit organization, opening the first black-artist-owned gallery in the Bronx and having his artwork appear on the television show “Luke Cage,” to name a few — but, Draper thinks none of these things are that big of a deal.

Draper, who grew up in Harlem, is passionate about giving back to his community and seems blissfully unaware of the rarity of his innate altruism.

Draper says he “speaks for those who can’t speak.”

“I can say things a lot louder and clearer than others can,” he explains.

Draper’s gift for being articulate is palpable. He has a knack for unraveling serious topics in a manner which compels even the disinterested to care. However, rather than using his rhetoric to convey these messages that he wants to give voice to, Draper uses his distinct text-based artwork to speak for the unheard.

“Words have power to me. I always say that I’m a public speaker, but my podium or soap box is just my artwork,” Draper explains.

Draper often uses his soap box to speak about issues which affect black people and his community, however, Draper isn’t just preoccupied with sending a message about these issues, he’s also physically working towards helping his community, particularly the youth of color, through his nonprofit organization, #TakeCareofHarlem, his role as an art educator at Eagle Academy and by establishing an art fellowship for students.

“I didn’t get here by myself, no one did,” Draper affirms.

Draper founded “#TakeCareofHarlem” in 2013 along with his two co-founders Kells Barnett and Melissa Mitchner. The organization carries out charitable projects for the betterment of Harlem.

“Harlem is changing, and people of color aren’t equipped with what they need to stay relevant and in power. We’re just trying to give our people the tools they need,” Draper said.

Draper also gives back as an art educator.

“I’ve always had an artistic influence in my household. I’ve been in museums and galleries for as long as I can remember” Draper recounts, “Art has always been my thing.”

In spite of Draper’s love for art, he explains that he didn’t study art in college or decide to pursue it professionally initially because art school “beat him out of it.” Years later, as an art educator now himself, Draper vows to be different and inspire the artist in every student.

“A lot of art educators don’t teach for the whole child,” Draper explains, “So, [for] my students, it’s all about finding what they do and generating ideas and possibilities.”

However, sometimes possibilities are limited when they shouldn’t be in art, and Draper has taken it upon himself to try and change this.

“There are so many young people who are amazing, creative minds, who don’t get to do what they want because they don’t have the money,” he says.

Hence, Draper is in the process of creating a fellowship where students are given grants to fund their art projects, and the grant money — a total of approximately $5000 split between the receivers of the grant—will be coming out of Draper’s own pocket.

When Draper is asked how he manages a nonprofit organization, being a teacher, owning a studio, curating art for the Harlem Hospital and organizing a fellowship all while creating new work regularly, the answer is simple.

“I find the time,” Draper said.

Ronald Draper doesn’t just shatter the struggling artist stereotype, he changes the game all together.  Not only does Draper project powerful messages through his art, but he also embodies the message like a walking inspiring art installation himself.