Making a Difference ‘One Girl At A Time’ 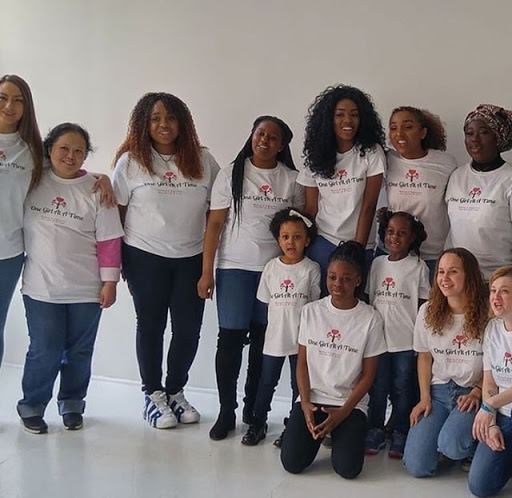 ‘One Girl At A Time’ team poses for a team photoshoot.

Anxious high school students listen to words of encouragement from St. John’s senior Princess Adenike. Students interact as they discuss bullying with the members of One Girl At A Time. At St. Francis Prep, Adenike along with One Girl At A Time members, spoke to bring awareness to self-love, toxic relationships, and consent. The organization got the gig with the help of the organization’s outreach coordinator, Regina Farrell.

“It was an amazing experience,” Adenike said.

One Girl At A Time is a nonprofit organization that seeks to take a stand for rape victims, victims of domestic violence, bullying and gender discrimination. Their goal is to give young women a voice by holding a variety of events.

Having grown up in Jamaica, Queens as a private school student at St. Francis Prep, Adenike relates to the high school students. At the age of 14, she knew what she wanted to do with her life. Her sophomore year, Adenike decided to create the nonprofit organization.

A few miles away from St. John’s lies one of the organization’s toughest crowds to date — the unfazed students of Benjamin Franklin High School. Different from the private school they visited, the students appeared to be uninterested in the program’s message. “It was a terrifying experience”, Adenike said. “It shows that those students don’t have programs like that.”

The members of One Girl At A Time didn’t let the disinterest stop them, instead, they decided to speak to the school’s counselor about creating a program to assist the students in getting more involved with the community. Today, they continue to work with those students.

When Adenike first generated the idea for One Girl At A Time, she wanted it to be an event that occurred annually at a park in New York.

“At the time, I pictured Roy Wilkins Park as the setting,” she said. “I wanted there to be a bunch of speakers, fashion shows, performances of plays — I wanted upcoming artists to perform all for one cause.”

With a dream to help others, Adenike set out to apply for a special events permit. At first, her friends supported her idea. However, they did not know she was going to take action, which left her mother as her main supporter.

“At the time I didn’t think this was going to work, so I stopped everything I was doing,” Adenike said, referring to giving up on the nonprofit after feeling discouraged.

Until about a year ago, Adenike, now 20 -years-old and majoring in communication arts, started to invest in her dream once more. With a support system, she was able to execute the same vision. Their mission, to make a difference “One Girl At A Time.”

One Girl At A Time’s first event occurred earlier this year. In April, over forty members walked the Brooklyn Bridge in honor of “Denim Day”, a campaign that brings awareness to sexual violence. Members wore their white One Girl At A Time t-shirts along with denim jeans as a visible sign of protest against sexual violence. Chanting powerful words in honor of those who are oppressed, bystanders joined the crowd as they walked the Brooklyn Bridge that sunny Saturday afternoon.

With a successful turnout, Adenike and her support group set new goals for the organization. In June, they hosted their first event, “Me, Myself, and I: The One Girl Edition.”

There, freelance journalist Falasha Campbell was the keynote speaker who talked about the importance of empowering young people on a daily basis. Former Mrs. New York International 2015 and the current Mrs. Brooklyn America, Marjorie Vail, also spoke at the event along with founder of Propelled Media TV, Fabiola Jean, and founder of Face My Abuse and former manager of Mike Tyson, Jacqueline Rowe. They spoke about their journey of self love as African-American women in the media industry. The entrepreneurs also touched on how to start up your own business and what it is like to be your own boss.

When asked how Adenike is able to run a nonprofit organization and be a full-time student, she said, “it’s very stressful, it’s all about  time management and having a dedicated team.”

In November, the members plan on having a ‘Paint and Sip’, a gathering with group painting lessons accompanied by wine or other beverages, at a local restaurant in Queens.

Adenike is optimistic about the organization’s future endeavors, as she finishes her college education with a Bachelor’s in Science this May.