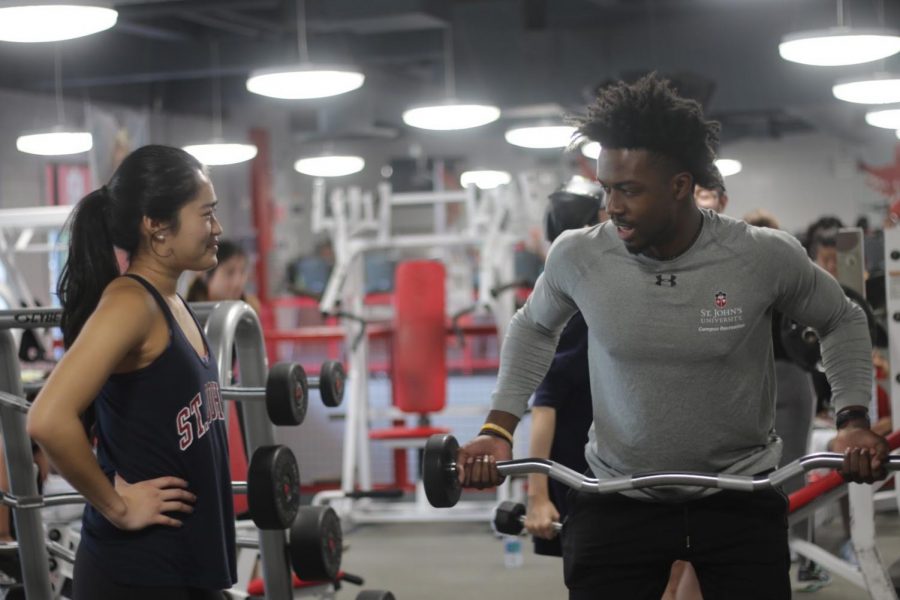 St. John’s senior Ashton Meertins is a certified personal trainer who has inspired many through fitness and his story of overcoming bullying in high school.

As a skinny high school freshman, Meertins entered Holy Innocents Episcopal in Atlanta, GA not knowing what to expect.

“I was one of only eight African Americans in my class,” Meertins said.

As a result, he was subject to discrimination and stereotyping. Meertins started playing for the junior varsity basketball team, where he was teased by his peers and coaches because of his stature.

“I used to get picked on a lot for being skinny. Being that young you take it all in, especially being introverted like I was. Sometimes you just sit there with your thoughts and think about the same negative things,” Meertins said.

As he entered his sophomore year in high school, Meertins made the varsity basketball team. The coaches made it mandatory for all players to weight train. Meertins did not enjoy the weightroom and favored time on the basketball court. “I trained here and there because it was what we were required to do,” he said.

Meertins later became the captain of his school’s varsity basketball team. His head coach, Terry Kelly, was determined to help bring out the best in Meertins. As the captain, he learned how to become more vocal, understanding and take responsibility.

“I began to break out of my shell,” he said.

As he continued to experience bullying in high school, Meertins desired to be surrounded by open-minded individuals.

“I wanted to be able to feel not only accepted but like I didn’t have to walk around with a chip on my shoulder because of my skin color.” This led to his decision to go to St. John’s University, a diverse college, to further his educational career.

Meertins started down the path of weightlifting during his first year at St. John’s. As a freshman, Meertins was randomly assigned to dorm with current personal trainer and close friend, John Pohopin. Pohopin dreamt of becoming a competitive bodybuilder and frequently weight trained. Meertins had another dream, however: to walk on for the St. John’s basketball team.

During his freshman year, however, the St. John’s basketball team did not allow walk-ons. Unable to play the sport he loved, Meertins felt a void.. He was left alone in his room for the most part, merely attending class and sleeping, while his roommate continued to go to the gym consistently.

Eventually, Pohopin influenced Meertins to work out with him. “By the end of the first semester my freshmen year I put on 25 pounds of muscle,” Meertins said.

Consistency at the gym made him realize improvements in all aspects of his life. Whether it was stress levels or filling the void left by not playing basketball, working out was the answer.

“It became addicting,” he said.

Meertins began to fall in love with exercise. He started to go on a ‘lean bulk’ by eating a variation of vegetables and protein six times a day, with the goal to become muscular and lean.

To him, “the healthier you eat the better you’ll feel.” According to Meertins, the nutrients you consume go back to your muscles, therefore, it is important to eat healthy to improve your body.

“Protein is not only a source of energy, it also helps your muscles grow and develop,” he said.

Such dishes may include fish, chicken and/or vegetables.

After gaining confidence, self-esteem and friends both in and outside of the weightroom, Meertins was able to share his love for fitness with other people.

During his second semester of sophomore year, Meertins became a certified personal trainer for St. John’s Campus Recreation. The process to become a personal trainer depends on certification.

“I had a mentor who was in bodybuilding competitions,” Meertins said. Learning from his mentor, Raied Salegh, as well as doing his own research, Meertins earned a certification for American Sports & Fitness Association (ASFA).

He now trains three clients a week, each of them having twelve prepaid sessions. He not only wants to help people achieve their physical goals in the gym, but also assist those who have low self-esteem.

Fast-forward four years later in his fitness journey, Meertins is a senior at St. John’s majoring in psychology. He plans to pursue neuroscience and neuropsychology. “I want to be a doctor and help children and adolescents with mental disorders.”