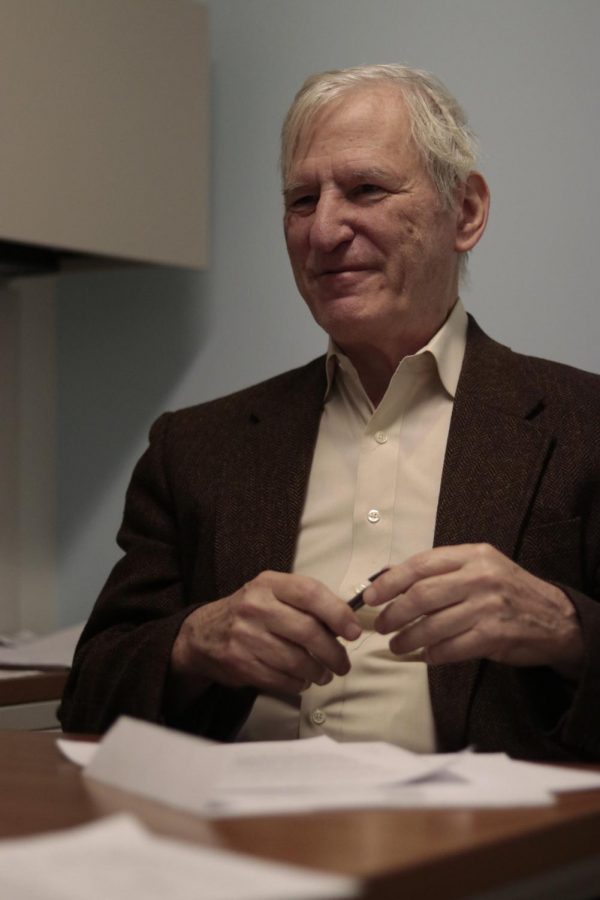 Prior to Election Day, I reached out to Anthony Pappas, an economics professor running for Congress, in hopes for an interview — I never heard back. But last week I received a handwritten letter addressed to the  Torch office, it was from Pappas and he was ready to talk.

Despite only seeing a photo from him off the St. John’s staff directory, he was easy to spot in Bent Hall’s newly renovated third floor. In his tiny and bare white-walled office, he talked about the outcome of the election, his reasons for getting into the political world and his future.

He was soft spoken, generous with eye contact and, overall, not as intimidating as a prospective politician is expected to be.

Pappas has been a professor at St. John’s since the 1970s, saying he couldn’t remember exactly when he began. He is a graduate of MIT and Yale and is the son of Greek immigrants. He grew up in the Upper West Side, but found home in Astoria.

Pappas ran on the Republican line in New York’s 14th Congressional District to represent parts of Queens and the Bronx in Congress. His Democratic opponent was Alexandria Ocasio-Cortez, who beat him with 78 percent of votes, according to The New York Times. Pappas received 13.8 percent of votes — Joe Crowley and Elizabeth Perri picked up the remainder.

Pappas entered the political realm after dealing with a 10-year divorce battle, which is where his disappointment in the justice system stems from. He was more than transparent talking about his divorce battle in which he was accused of domestic abuse. He even provided official documents during the interview.

He denies the allegations made against him and, according to The Associated Press, his ex-wife was granted a divorce on grounds of cruel and inhumane treatment. His political run came from wanting “to help many of the victims that encounter similar issues” as him.

This “ordeal,” he added, led him to write five letters to Pope Francis over the course of five years, discussing his concerns in the courts system. He recently received a response from the Vatican thanking him for voicing his concerns.

“There’s a lot of injustice in the courts system and many people suffer from it and they commit suicide and the suicides aren’t investigated,” Pappas said. “So it’s like dealing with a broken system which can be viewed as like a dictatorship.”

The 72-year-old said other than his disappointment within the justice system, other reasons he chose to run included topics like income and wealth inequality, healthcare and education.

“As a candidate you try to become part of the political conversation; I didn’t succeed that much because my opponent became a media star — sort of all the attention shifted to her,” Pappas said.

He thinks Ocasio-Cortez has laudable objects but disagrees in terms of how to try and take care of them. “I sort of prefer a lower level of government involvement than she does but you know everyone’s in favor of better health, education and living standards. The question is how do you implement that without the government becoming intrusive and overstepping proper balance?” he said.

He was unhappy over the fact that the two of them never got to hold a debate.

Although disappointed with the election results, Pappas was not surprised. Democrats outnumber Republicans in the district 6-to-1; a Republican hasn’t held a seat since 1920. “Most people viewed it as long shot, but I decided to undertake it,” he said.

Pappas thinks if Joe Crowley won the primary instead of Ocasio-Cortez he probably still wouldn’t have had that great a chance at winning because the Democratic population in the congressional district is too strong.

“Which is bad from the standpoint it’s not really like a democracy where there is a choice between alternatives,” he said. “It has other bad effects like the incumbents keep getting reelected.”

Already without a strong Republican population behind him, his candidacy was renounced by the Bronx and Queens GOP, which he said was on the basis of false allegations. “They got a hold of them without checking with me about whether they were valid and they made an impromptu decision to renounce my candidacy,” he said.

Now almost a month after Election Day, Pappas is taking it easy. As for his future in politics, he said he is going to wait and see what happens and get involved in his local community.

“I’m still going to try and be on my crusade for moral justice,” he said.