The Torch Has a Chat with Dr. Marie-Lise Gazarian 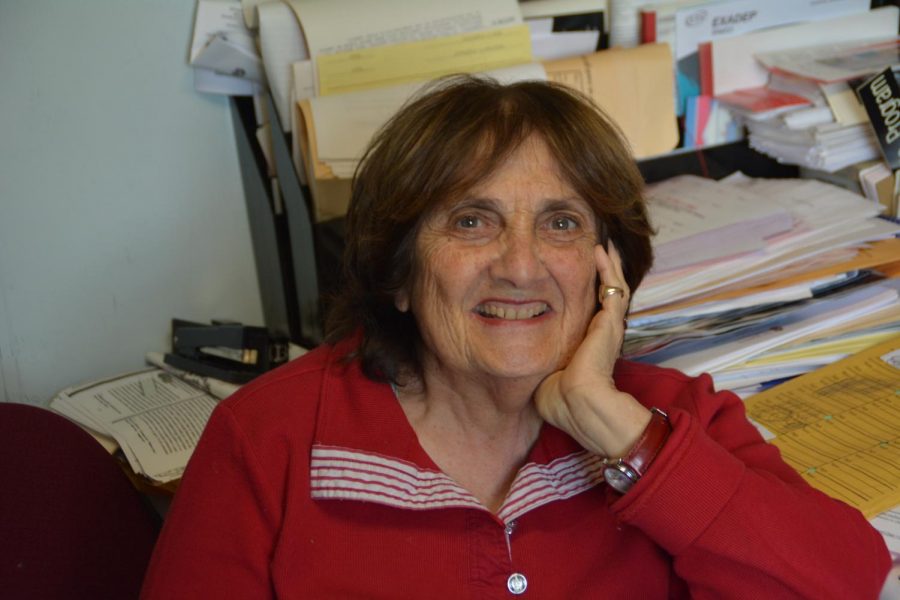 Dr. Marie-Lise Gazarian, professor of Spanish and Latin American literaute was honored as a “Profesora Honoraria.”

In her small office on the fourth floor of St. John Hall, there is not nearly enough room for all of the books, newspaper clippings and sheets of paper that she has in her possession. Shelves are so full that books no longer fit in a vertical fashion — they must be inserted horizontally on the shelves on top of the others. On top of her desk, dispersed among three separate coffee mugs, stand mini replicas of the French, Spanish and Italian flags.

Dr. Marie-Lise Gazarian, despite her extensive collection of all things literary (including some of the works that she has written and published herself), is not an English professor or strictly a professor of English Literature. She is a professor of Spanish and Latin American Literature, director of the graduate Spanish program and so much more.

The flag that sits in the middle mug, the French flag, is reminiscent of her native tongue. The fluent manner in which she speaks Spanish would lead you to think otherwise. “If you would call me at my home number, I speak in three languages [on my voicemail]. The first one is Spanish. The second is French. Third is English. Why? I have no idea.”

Gazarian began her life in France, a country that she called home for her younger years. It was the first language she came into contact with and a language that she spoke with a bit of a strange flair. “Why has she such a strange accent?” Gazarian recalls the nuns telling to her mother when she was younger. “I don’t know why, but when I was a little girl, for some reason I pronounced [words in] French as if I were from Spain.”

Gazarian’s love for the Spanish language has led her all over the world, to countries such as Spain and Chile and face to face with esteemed writers such as Rafael Alberti and Fernando Arrabal. These experiences were never simply handed to her, rather, they were the result of her hardwork and dedication to Latin American literature and her burning passion for teaching.

“I have to mention the word passion. I have a passion for the Spanish language, although I did begin teaching both Spanish and French,” Gazarian said. “I love French literature, but Spanish has a special call.”

In 2002, Gazarian won the St. Vincent de Paul Teacher/Scholar Award from St. John’s, a testament to her years at the university and her distinction as a teacher. “The satisfaction of transmitting knowledge and inciting students into the art of writing is commensurate with teaching a child how to talk, to walk, to live,” she wrote in her award acceptance speech.

As the director of the Spanish graduate program at St. John’s, Gazarian leads students to deepen their love of the language through different lenses such as “Exile and Immigration,” “Women in History,” “Translation and Interpretation,” “Literature and the Arts” and “Journalism and Creative Writing.”

As she watches students broaden their knowledge and take to the Spanish language, Gazarian says she has one wish: to see a student publish a book. “I guess it is no longer a wish because I have several students who have written books,” she said. The smile that spread across her lips indicated that it was a joy to see her students publish work. She mined through her bookshelves once more to find a copy of “Entre Rascacielos,” a literary magazine full of work done by SJU students in both English and Spanish.

Her accolades are not just limited to the fences of the St. John’s campus, however. In October, she boarded a plane to Ecuador, where she was awarded the “Life Path to Educational Excellence Recognition,” by the Ecuadorian government and the Foundation for the Integration and Development of Latin America (FIDAL) as a testament to her commitment to her students. Earlier in October, Gazarian was also honored as a “Profesora Honoraria” by the Private Technical University of Loja (UTPL) as a recognition for her spreading of the Hispanic culture, her contribution to the hispanic culture, contributions to Fernando Rielo Pardal and her exceptional work and accomplishments in the field of literature.

Gazarian has already published more than a dozen books and interviewed notable hispanic writers such as Ana Maria Matute, Isabel Allende and Elena Poniatowska among others. Currently, she is working on three more books in between her work as a professor. She is the director of the graduate program and Vice President for the Northeast chapter of Sigma Delta Pi, the National Collegiate Hispanic Honor Society.

One of the books she is currently working on is her very own memoir, of which she is still trying to discern a title. After moments of contemplation she shared the first that came to mind: “So You Were Listening to Me?” Fitting for a woman who humbly adds outstanding accolades to her continually growing repertoire.