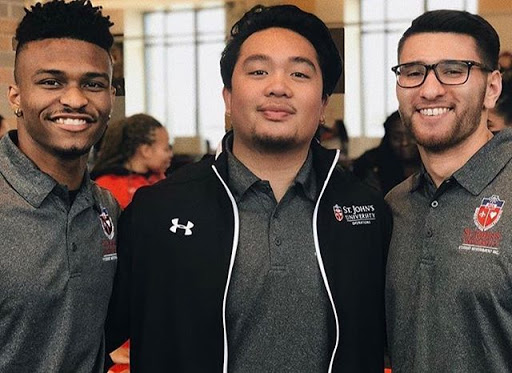 Being a student leader on campus is all about direction, organization and above all, the desire to reach your goals. That’s what Matt Macatula stresses is the importance of his role as a student leader at St. John’s University. Originally from San Diego, Macatula is a third-year Information Technology and Computer Science double major.

Besides the study-intensive majors, Macatula also represents a wide variety of organizations and populations on campus. As a RA in Century Hall, Manager for the Operations Staff, Student Government Inc. Chair of Organizations, Catholic Scholar and full-time student, Macatula juggles both his St. John’s and personal responsibilities in hopes of a successful future in the technology industry.

“I want to get into the (tech) field because that’s where our future is headed, and I want to be a part of that,” Macatula said as he discussed his majors. Even though Macatula hates coding, he laughs that it’s the future prospects of tech that keep him invested.

Greek Life was also a big part of Macatula’s time on campus, having previously been an e-board member for the now unrecognized fraternity, Pi Kappa Phi. On the subject of his fraternity, Macatula said, “It was a shock, we were a 4x fraternity of the year on campus and we really held our brothers accountable, to hear that we were essentially being kicked off campus with other organizations that didn’t hold to our standards was upsetting.”

Even with a full plate of responsibilities, Macatula stays cool under pressure and pushes to be the best that he can be, with ambitions that reach all the way to the United Nations.

“I think it all comes down to time management – you know scheduling is important but it’s the motivation to keep going that pushes me,” Macatula describes in a matter-of-fact manner.

While Macatula gives St. John’s praise in its opportunities for students, he notes that he’s not ignorant to the fact that the classes themselves don’t necessarily prepare him.

“Technically I wouldn’t say we have the best programs, but the networking opportunities and outside connections are very helpful,” he said.

For his senior year, Macatula will be interning at the United Nations, a gig that he acquired through the Catholic Scholars program, where he will be a liaison and assistant to the congregation of the mission, the Vincentian representative at the UN.

According to Macatula, he will, “be a liaison between the Vincentian NGO and the UN.

I’ll get to sit in on big conferences regarding tech and global issues.”

In accordance with being a student leader, he has big hopes for SGI  in ways of his Organizations committee.

“We’re doing a lot of new things, we just welcomed six new amazing clubs and are working towards a transition class between e-boards so that the organizations on campus are better prepared for leadership roles and have longevity at St. John’s,” he said.

Even during this interview several students stopped by to talk to Macatula and just say “Hi,” which he happily greeted back.

Operations co-worker and St. John’s student, Ryan Michel had nothing but praise for Macatula. “He’s so charismatic with everybody and he gets along with everyone.” Michel continued to exclaim that the best thing about working with Macatula was the energy, “He brings so much energy.”

As a student leader and an employee of St. John’s University, Macatula recognizes the sometimes difficult balance between being a student and working for the University.

“Seeing both sides of the coin gives me more belief and hope that they’re [St. John’s] doing the best they can,” Macatula described carefully.

“At the end of the day the students come first and I believe that’s how it should be at any higher level community.”

With his “students first” attitude, Macatula has ambitions and bigger plans for his time as a student leader at St. John’s.

What exactly these plans are, Macatula says that he’s, “Not ready to show [his] hand yet.”