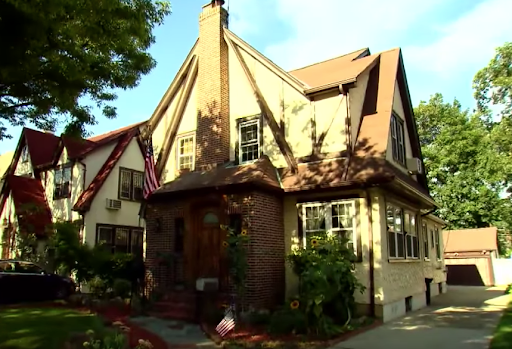 The five bedroom home is located at 85-15 Wareham Place in Jamaica Estates.

Hey St. John’s students, anyone on the hunt for fall housing?

While it might be way outside of the budget, President Donald Trump’s childhood home in Jamaica Estates has gone up for sale.

85-15 Wareham Place was built by Trump’s parents, Fred and Mary, in 1940. Trump only lived there until he was four and it has since had several owners and even  appeared on Airbnb for a nightly rental fee of nearly $800. Some might say it’s a small price to spend a night in the home that the president spent his years as a toddler.

“Honestly, if I had the money why not,” sophomore global development and sustainability major and Chicago native, Olivia Grondy, said. “It’d be fun to fix up the inside of the house since it just looks really dated in there with all of the old furniture. I’d probably get rid of all the weird Trump memorabilia too.”

Only a 15-minute walk from the St. John’s campus, this neatly manicured Tudor-style home could be the perfect catch for some lucky buyers. The house itself is in a neighborhood of similarly-priced properties. Directly across the street, a nearly identical house is up for sale at $1.2M, however, it is missing the allure of having once housed President Trump.

The house is fully equipped with five bedrooms, a library, a five-car driveway and Trump family photographs hanging on the walls.

Buyers are in for a real surprise when they enter the home’s living room, as a life size cutout of President Trump himself comes with the place. It stands tall in the corner of the room.

According to the Wall Street Journal, one of the bedrooms even comes with a sign that reads “In this bedroom, President Donald J. Trump was likely conceived, by his parents, Fred and Mary Trump.”

Sophomore Anum Dar, from Saddle River, NJ is looking for  housing near campus. This student doesn’t think Trump’s old residence is for her.

“Honestly, I would not want to live there. I appreciate an old house, but the history of this place doesn’t appeal to me. The pictures of Trump hanging up inside are really creepy, I’d feel like he’s watching me… especially that cutout,” Dar said. “I wouldn’t step within a 50 mile radius of this house.”