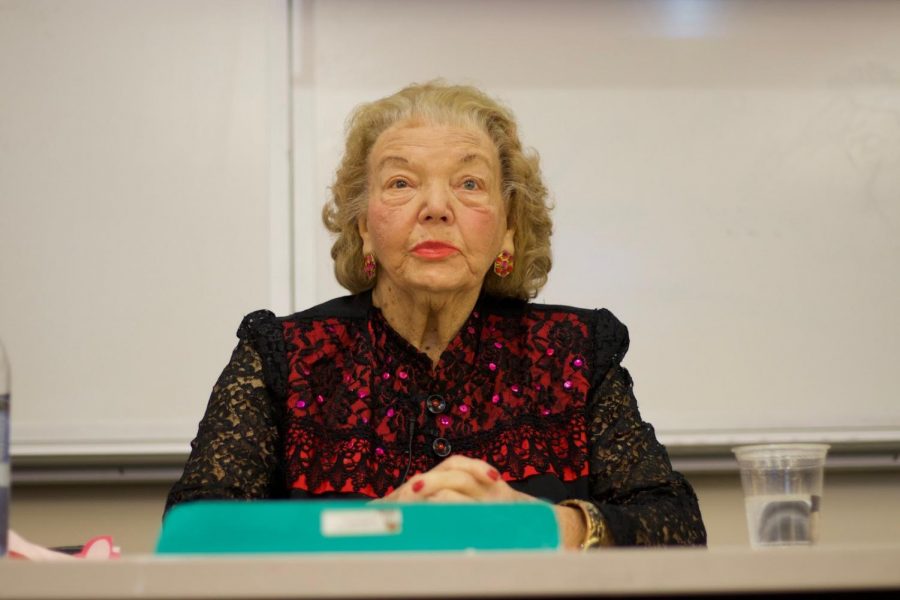 On Dec. 21, 1941, German planes flew over a region of Thessaly, where a capital city lies surrounded by lush valleys and imposing mountains in Greece. As Lena Casuto Goren walked the streets of Larissa with her sister and her friend, she tilted her head toward the matte black canvas covered with red lights flickering in the distance. She could hear engines roaring, and suddenly an intense light engulfed the night sky.

“We thought they were Greek planes until they open the little doors in their bellies and began dropping bombs like candy,” Goren said.

Nearly eight decades later, Goren shared her experience as a Holocaust survivor with students at St. John’s on Feb. 21. The event was held by the Jewish Students Association (JSA). They later told the Torch that their new prayer room on the ground floor of Tobin will open on Thursday, Feb. 28.

Students got the opportunity to sing ‘Happy Birthday’ to Goren, as they celebrated her 89th birthday with a strawberry cake.

President of JSA and junior at St. John’s, Natalie Eshaghian, was in attendance and has heard a few Holocaust survivors speak over the years.

“Each and every time, I am amazed at how these strong individuals take something so horrendous and find the beauty in it. Lena gave such a compelling speech to a room filled with college students,” said Eshaghian.

From Lena’s speech, Eshaghian says what stuck with her most is: “…whatever dreams we have in the world, we should always pursue it. And whatever the circumstances, we should never forget about our true identity and to always continue to pursue the things we are passionate about.”

Reminiscing about her life, Goren told students about how her family moved to Larissa the year after she was born. Goren said that her father became the chief rabbi of a local temple, as well as a Hebrew teacher.

“He was well respected, both in the Jewish community and outside it. We had a good life — we had a home. We had our health. All was well with our world,” said Goren.

“We knew they were the enemy, but they actually treated everybody well, even the Jews,” she said. “On the surface, it didn’t seem so bad. But we had heard what was happening in Salonika. We knew about the deportations. My mother’s whole family was lost to us. We didn’t know if we would ever see any of them again, and we feared that we would be the next to go…to disappear from the world into the camps … and be lost as well.”

Goren and her family began hiding — leaving Larissa many times. During the week of Passover in 1941, they hid in a stable with horses. Over the course of a year, they hid in many different places far from their home in Larissa.

“We believed we would come back to Larissa when the emergency was over,” Goren said.

In late 1941, Goren and her family arrived back in Larissa. However, the Germans did too.

According to Goren, German bombings became more frequent. Sirens would sound and people would rush to the bomb shelter, which was under a building owned by the president of her father’s congregation. The shelter soon became “a second home” to Goren.

The shelter was not always safe.

“One morning, at 6:00 a.m., we had an earthquake. Common sense said that we should get out of the building before we were buried under it,” said Goren. “But the same day, the Germans were bombing the streets. If we went out and exposed ourselves to the bombs, we would be just as dead.”

According to Goren, people from outside the shelter came pouring in.

“It was then that I learned that it was still possible to think of ourselves as lucky in spite of all the terrible things that were happening. Because of the earthquake, the building above us had fallen backwards!”

If the building were to fall forward, the entrance to the shelter would have been blocked and no one would have been able to get in or out. As it turned out, everyone survived that day.

“In a world where everything is turbulent and uncertain, even small blessings must be appreciated,” Goren said.

For the next several months, running, hiding, fearing death and deportation were constantly on Goren’s mind.

Goren’s worst fear soon became her reality. The Germans arrested her father, demanding that he reveal the names of all the Jews of Larissa and where they were hiding. However, he never told them.

“We thanked God that they released him…but we didn’t know that his release was only supposed to be temporary. That very afternoon, the mayor of Larissa asked my father to come to his office. Risking his own life and the safety of his family, the mayor revealed to my father that the Germans would be rounding up all the Jews very soon— perhaps even the next day— and deporting them to the camps,” Goren explained.

Goren and her family left in the middle of the night, not knowing where to hide. After walking all night, carrying what little they could take, they ended up in a monastery far away from Larissa. The monastery was located in a valley near the town of Tzouma and was occupied by five monks.

“They did not want us there. They asked us to leave,” saod Goren. “Then a miracle happened. One of the andartes (the underground) came to our rescue and it was the monks who ended up leaving, and us who moved in.”

For the next 18 months, Goren and her family lived in the monastery along with 83 other people.

“We had a roof over our heads, and walls to hide behind. It was hardly luxurious. All of us had to live in one room, like a barn. There were no beds or bathrooms there at all. We slept on the floor — dozens of us — men, women and children,” she said.

Unfortunately, although they had shelter, there was no way for Goren and her family to purchase food. Goren’s mother took matters in her own hands, and decided to go to the nearest village to work as a seamstress.

“She risked her life to be able to bring us food,” said Goren. “My father and I also came out of hiding to help feed our family. We would go to the wheat fields and pick up remnants of the plowed wheat so we could have additional food.”

Soon after, everyone was diagnosed with malaria. “Everyone got it, but thanks to the medicine brought by the underground, everyone survived,” she said.

According to Goren, the events always reminded her that she was not yet safe — even in the hiding place.

Goren was 13 years old when a local shepard tried to rape her. “I hit him on the head with a bottle of milk I had with my lunch, and I ran,” Goren said.

Despite all the hardships, Goren’s faith remained. Finally, the need to keep watch ended, and so did the exile from their homes.

They ended back in Larissa, where Goren became a beautician.

Soon after, Goren’s family received a letter from her father’s sister to come to America.

“I made a life here,” said Goren. “I married … raised children … had a career … remarried … and generally lived an American dream. Yet I have never forgotten those few years from age ten to age fifteen that shaped who I am … what I want … what I fear … and what I value.”

As an American citizen, Goren has worked in the Supreme Court and in local courts in NYC as an interpreter in Greek and Spanish.

Goren even entered a pageant for “Miss Senior America” in 1999. She is currently an active member of The Melodians, a musical group which performs throughout  Queens. Goren can sing in five languages: Hebrew, Spanish, Italian, English and Greek.

Goren gives the advice, “don’t die before you’re dead,” as an empowering message to live each day with purpose and passion.