The End of An Era: Payless Shoesource Closing Its Doors 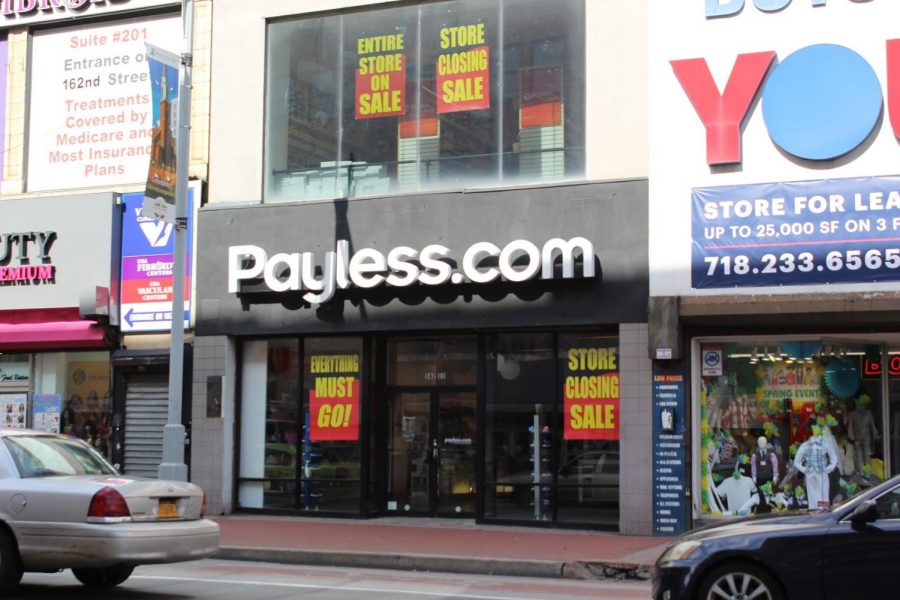 Whether it was a pair of slip-on sneakers  for your first job at a restaurant or cheap dress shoes for your Sunday best, at its peak, Payless Shoesource was the go-to destination for a reliable discount shoe purchase.

With three locations within a two-mile distance from St. John’s campus, Payless has been an affordable footwear  option for students for many years. The glory days of Payless have come and gone, as stores across the country have begun to close their doors.

“I was a kid who shopped at Payless for emergency purposes — last minute needs for birthday parties, Easter,” said senior Chanel Burgess, a public relations major with a minor in event management and fashion studies.

“I remember having this pair of black patent leather shoes with a little heel on them that I loved and I wore them until I outgrew them because they made me feel cute with my uniform. Like, you couldn’t tell me [anything], those shoes were fly, ” she said.

Students may remember when Payless released an advertisement last year in which they opened a fake luxury shoe store called Palessi, where they sold what people thought were high-end shoes. This was in an effort to attract customers  to the dying stores, as the company filed for bankruptcy the year prior in 2017.

This attempt does not seem to have worked, as the store filed for bankruptcy again just last week on Feb. 18. By pursuing the same course of action, Payless now follows  other once popular brick-and-mortar shops such as Toys ‘R’ Us, Gymboree and Charlotte Russe.

“I haven’t gone there since I was a kid. When it comes to Payless… you remember going there when you were younger with your mom,” said sophomore Liana Driscoll, a communications major.

“Every school year, since I went to catholic school, I would go with my mom to buy new shoes.”

Driscoll has since traded her velcro Mary Janes from Payless for the likes of thrifted Versace heels; a sign of the changing trends in her personal style and broader trends in fashion, such as a rising movement towards sustainable options, thrift shop fashion and an anti-fast fashion sentiment.

“I think people aren’t interested in buying a bunch of cheap shoes anymore, or even in the whole fast fashion aspect of a lot of mall stores. I think people are looking for quality and longevity, both in shoes and clothing,” said Driscoll.

Vice President of Red House, Dana DeRiso, has also come a long way from her favorite Payless shoes — a pair of silver sandals she remembers having as a preteen. DeRiso now gravitates towards higher -end shoes that will last longer than those of Payless.

“I don’t want a pair of shoes to only last me one season, I want to be able to revisit them down the line. I also don’t mind investing a bit more money on better shoes,” said DeRiso, a communication arts major and fashion studies minor.

“I’m currently saving up for this pair of Jeffrey Campbell’s that have a dozen different colors, a floral pattern, and some silver hardware on them. They’re kind of insane and obnoxious, but I adore them.”

Students who are still looking for an affordable pair of shoes may not even think about  leaving their bedrooms to get a pair. With the rise of online shopping and lightning fast shipping, it is no wonder that stores like Payless have taken a hit.

“When you have the ability to find affordable shoes on Amazon and get them delivered to your door in a matter of days, people are much less likely to go out to a store like Payless. I think that the convenience, efficiency, and instant gratification of sites like Amazon are definitely taking a toll on brick and mortar stores like Payless,” said DeRiso.

The signs on the storefront of the Payless Shoesource location closest to campus at 162-11 Jamaica Avenue announced its plans to close and boast of “everything must go” deals that no college student can deny — if they can be persuaded to choose Payless over online shopping one last time.