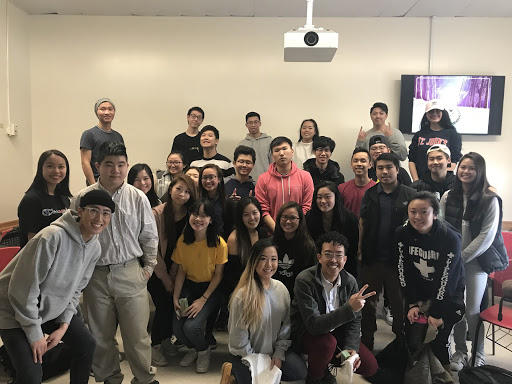 “It’s definitely a fresh start –– a lot of us actually aren’t Vietnamese. A lot of us are taking the values of VSA [Vietnamese Student Association], the nonprofit organization, and instilling that into St. John’s,” Justin Lee, senior vice president of VSA, said.

Justin is of Korean descent and says that the organization’s goal is to spread cultural awareness.

“It’s weird when you have so much diversity in a focused culture –– but I think that’s something great about the organization … it’s diversity. In a way it’s like we are learning as we build the organization.”

During the spring semester of 2017 the VSA, was created as a nonprofit national organization. The organization stemmed from the Vietnamese Cultural Organization (VCO) which was considered a “dying organization.”

VSA was founded by St. John’s alumnus, Norman Chuk, as a different network.

When Chuk was a student at St. John’s, he attended an international conference known as the Union of North American Vietnamese Student Associations (UNAVSA). UNAVSA is a non-profit, non-partisan, community-based organization dedicated to cultivating the next generation of leaders who will serve as stewards of the Vietnamese community.

“It wasn’t until I realized how big the organization was, did I want to tap into that community. I wanted St. John’s University VSA to be recognized throughout the U.S. and Canada,” Chuk said.

With this in mind, Chuk underwent a “complicated process” to create the nonprofit organization on the St. John’s campus.

However, persistence led to the creation of VSA.

According to Justin, the organization makes way to explore and experiment by learning from other VSA organizations located on other college campus such as Binghamton, Stony Brook and Rogers.

From networking, the nonprofit  presented an annual pageant, which took place on March 2. “It brings the Asian culture together and showcase it,” sophomore Stephanie Lee said.

During the cultural walk, contestants submit music that matches their heritage. They walk and pose at designated areas on the stage. They also do a greeting/judge interaction where they bring gifts or anything from their culture to give to the judges.

Stephanie is the secretary of VSA and believes being a part of a diverse organization has helped her grasp her own roots. “Being in VSA opened up my eyes to the uniqueness of each individual culture, especially as someone with Malaysian descent. Seeing the values and similarities in culture made me want to go back and learn more about my own heritage,” Stephanie said.

Senior Connie Duong is the graphic designer of VSA who creates graphics and monthly calendars for events. Of Vietnamese and Chinese descent, Duong initially joined the organization to support her friends who were the founders of VSA.

“I’ve actually never been in touch with my Vietnamese roots before, so overtime I was able to learn more about my culture and grow a great appreciation of it. I’ve also made a few lifetime friends who have had a great positive impact on my life,” Duong explained.

Chuk hopes VSA will give St. John’s students two things: 1) Experiences that will shape them into a better leader through activities, trips, and conferences; 2) To be able to take advantage of the vast network VSA has to offer.

“Many people outside of VSA do not realize this but, VSA is the biggest organized Asian, student-run organization in the country –– the possibilities are endless.”