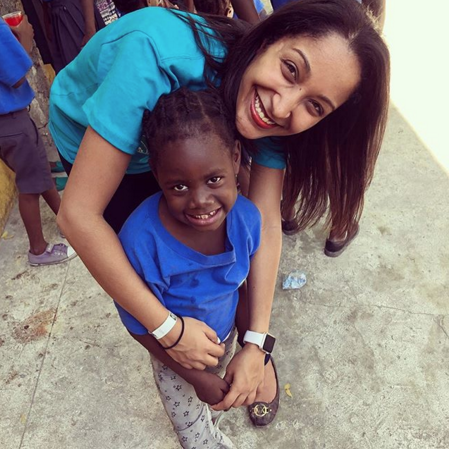 In 2014, Yendy Cave founded For the Kids of Haiti.

For anyone who has plans of starting a nonprofit organization, St. John’s alumna Yendy Cave has advice for you.

“I would say go for it,” she laughed. “If it’s not with your heart, it’ll be ten times harder and you’ll probably get tired of it quickly. If you can, be passionate about it.”

Cave is the founder of the nonprofit organization  ‘For the Kids of Haiti,’ and her passion for the kids truly shows.

For the Kids of Haiti, or ‘For the Kids,’ was established  in 2014 when Cave was struck with the idea of helping kids in an abandoned orphanage by providing them with food and drinks.Cave held a back-to-school event in June of 2014 and was able to supply them with backpacks, notebooks, pencils, pens, pouches and more.

Before this, she helped her cousin provide aid to 250 kids at a give-back party in  an area of Haiti called Furcy. Everyone in the family found ways to get donations for food, speakers, games, drinks and even gifts to put together.

After Cave’s first back-to-school party, she held another event in December that caught people’s attention on  social media. She received a message from someone who informed her about an orphanage with 100 kids that was in bad shape. Cave planned another back-to-school event about a year later, with the 100 kids included. At that point, she had provided aid for 140 kids.

“It had been a year since I was doing little things here and there and I decided exactly like four and a half years ago to make it official, to do a logo, do a website, and then I started going to structuring and finding help on the regular for them,” she said. “So that’s how I started and now four years later, here I am with 700 kids.”

Every year, about two or three events are planned for the kids. In December, Cave funds an end-of-the-year holiday party for gifts for the kids. In August, she holds the back-to-school events and by April or March it’s Health Day, which is when doctors come in to give general check ups. Additionally, she provides funding for the medicine that the doctors prescribe.

“I find doctors who are willing to do it for free,” Cave said. “They check everything from like if you have any type of fever, cold, but also your eyes, ears, everything to make sure the kids are okay.”

Cave did not expect to be the founder of a nonprofit organization as she was attending school. She received her Bachelor’s in Advertising and Public Relations at the University of Tampa, and her Master’s in Marketing at St. John’s.

In addition to the organization, Cave  handles a full time job. When she returned to Haiti after  finishing school, she decided to start a company that handles  advertising, social media marketing, public relations, corporate events, organizing press releases, booking and more.

As she’s handling a whole business of things related to  communications, she finds that her biggest struggle with her organization is doing it on her own.

“I do everything by myself which is probably not the smartest thing,” she laughs. “I don’t have a team or anything so that’s a lot to take in to do everything by yourself from looking for sponsors, knowing how much food you need, how many kids you have, sending food every month to each place, organizing everything you need for an event, like sound, a generator because there’s no electricity, order a company for entertainment, food, drinks, everything.”

Besides doing it all on her own, she finds the biggest challenge is really finding ways to provide for the kids, as it can be very difficult to do so.

“The harder part is more finding help on the regular for the kids. Because if I can’t find a way to feed them, then they dont eat,” she said. “I feel responsible because when you’ve been helping them for so long it’s like they’re your own kids.”

However, Cave’s not alone, as she finds help from her family — her main source of motivation. Through the emotional and financial support, she’s provided with enough to keep a positive mindset.

She finds that the kids also play a big role in the grateful mindset she’s developed.

“It’s taught me a lot to be grateful for my life in general for what I have and I never waste it because I know the reality of a lot of people so even for myself I always, even if I could, I stick to what I need,” Cave said. “Sometimes you don’t realize how much you have or how much you could lose everything in a day.”

From the first time she met the first 40 kids, she fell in love with them and recognized just how much they needed love and affection. Cave has come to realize that there’s been nothing else like the smiles she gets to see on the kids’ faces and the excitement they exude from just seeing her.

She shares a GoFundMe link whenever money is needed, but people are also welcome to holding their own campaign in support of the organization as well.