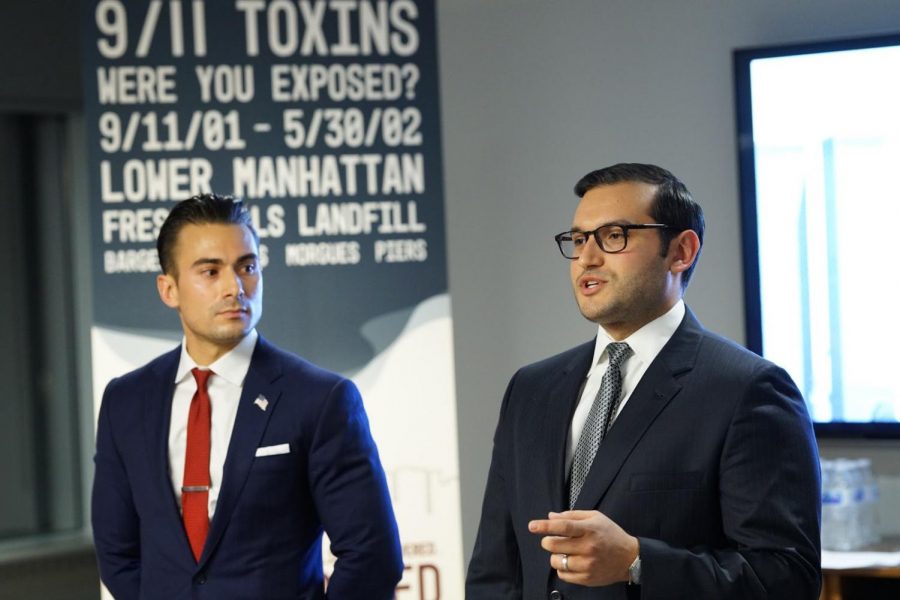 The terror attack that consumed New York City on Sept. 11, 2001 still lingers within the lives of New Yorkers throughout the five boroughs, and two St. John’s alumni have made it their mission to bring justice to those still suffering.

Chris Baione (‘09) and Matt Baione (‘11) are both graduates of the St. John’s Staten Island campus who later went on to study law at Seton Hall and Benjamin N. Cardozo, respectively. The brothers applied their law degrees to become the founding partners of the 9/11 compensation firm, Pitta & Baione LLP, whose focus is to obtain health and compensation benefits for victims of 9/11 toxins exposure. Their firm came to fruition in 2016, and just celebrated its three year anniversary.

The Baiones didn’t think this was where their career would take them, but after working at another compensation firm together they agreed that they could do a better job of helping people because of how close they were to the cause. Their firm has represented 1,200 people, and counting.

The Baione brothers credited their Staten Island roots for their passion to help the people and families that were affected by 9/11.

“Being that we are from Staten Island and have friends and family who were directly affected by the attacks and therefore have a better understanding as to what went on and what people are going through,” Chris said. “I was personally affected by this just being a New Yorker and watching the smoke over the landfill from where we used to live.”

Many times the job gets personal, as well as emotional, due to working so closely with people living with cancer and other diseases caused by toxins in the air from 9/11.

“These are 55 to 60 year old people who should [be] about to enjoy retirement and instead they’re in the hospital in chemo or they’re in really bad respiratory health,” Chris said.

He added that he has had to buy many boxes of sympathy cards because their clients are dying on a weekly basis.

“Sometimes we’re the last people that they ever speak to because they’re so worried about what’s gonna happen to their families,” Chris said. “It’s our jobs to assure them that we’re still going to have their backs and even if they’re not around, we’ll do our best to take care of their families in their absence.”

Matt said that although nothing can undo victims’ health problems, providing compensation for the wrongdoings of the government, like when former Administrator of the Environmental Protection Agency’s (EPA) Christine Todd Whitman said the air was safe to breathe in 2001, causing victims to not evacuate the city, gives them some justice.

Despite the difficulties faced, Matt and Chris agreed that their job is more fulfilling than they ever thought it could be.

“It’s fulfilling in the sense that we’re bringing justice to people who really deserve it and although nothing could give them back what they lost we are responsible for kind of giving them peace of mind,” Matt said.

The words “never forget” are always at the forefront of 9/11 remembrance, but there is currently a crisis for victim compensation. The Baiones are advocating for the renewal of the “Never Forget the Heroes Act,” a federal compensation fund to support victims. The fund is running out of money and cutting claims by 50-70 percent.

“This act would basically undo these problems and extend the fund indefinitely, match the funding and roll back the cuts,” Matt said on the fund, which is expected to close by December 2020 if changes are not made.

“The entirety of America has to come together on this,” Chris added.

More information for the “Never Forget the Heroes Act” and Pitta & Baione LLP can be found at www.911benefits.com.