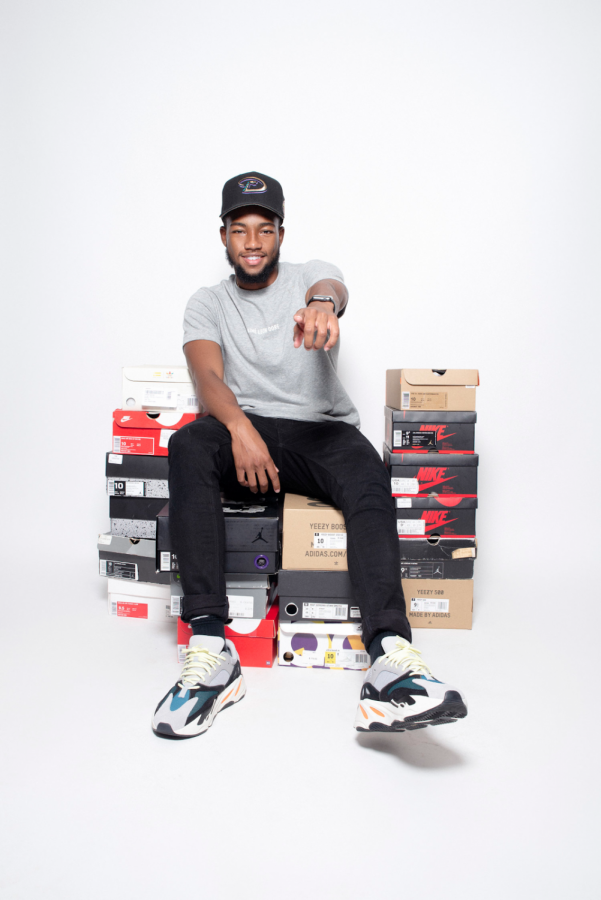 During the interview, Jared Galoimore disclosed that due to alleged drizzling rain, he didn’t wear his current favorite pair of sneakers, the OFF-WHITE x Air Jordan 1 Retro High OG ‘UNC’. He opted for the OFF-WHITE x Air VaporMax ‘Part 2’s instead. I told Jared that I didn’t see a spec of water in the air, to which he responded “Go outside, look at the ground, it’s wet.” I rested my case.

In 2011, one of the most popular Air Jordan sneakers of all time relaunched — the White Cement 3s. The sneakers feature a Jumpman logo in place of the 1988 OG Nike Air branding at the heel and tongue.

A high school student at the time, Galoimore detailed three cars at the shop where he worked so that he could purchase the highly-acclaimed sneakers. While most people his age purchased the sneakers for the aesthetic, Galoimore was more interested in the history behind the sneaker.

“It was just a classic shoe. People nowadays, they’re all up in the hype, the Off-whites, the Travis Scotts, all of that. I like it, I wear it, but at the end of the day, I like the history behind it,” he said. “I like the old stuff that people don’t wear anymore.”

In July 2017 as a college junior, Galoimore finally decided to take his passion for sneakers and launch a shoe cleaning service, VNDS Shoe Spa.

VNDS is a sneaker term that stands for Very Near Deadstock. According to Complex Magazine’s “A Beginner’s Guide to Sneaker Terminology,” this term began popping up on for sale postings throughout sneaker forums many years ago to describe a sneaker’s condition. In recent years, increasing the number of “very” in your near deadstock kicks for sale has become a trend.

“We bring sneakers to very near deadstock condition,” Galoimore said. “I’ve always been into sneakers from before I knew what sneakers were. Growing up, my dad always had sneakers and he was always buying me Air Forces, Jordans. The older I got, the more I got into it.”

The company started off as a sneaker cleaning service.

As time progressed, Galoimore said prospective clients would approach him inquiring about the possibility of a sneaker restoration service.

Galoimore then expanded the company to offer restoration services as well, which includes repainting, regluing and un-yellowing discolored sneakers.

“After that, people started asking me, ‘Oh you don’t sell shoes? You just restore it?’” Galoimore recalled, laughing.

“I got back into resell stuff after doing some research,” Galoimore said. “I mean it’s hard, but once you get over that hump, you can really make something out of it.”

Thus far, Galoimore has sold over 250 pairs of sneakers.

The Caldwell, NJ resident didn’t originally intend on making VNDS a brand, but ended up with an umbrella of different services — VNDS Shoe Spa became a cleaning, restoration and sneaker reselling brand before Galoimore knew it.

“I didn’t really see anything else that was offering all of these services in one source,” he said. “You can get almost anything related to shoes — if your shoes are dirty from a party, they’re old and worn out or you have scuffs on them, or you just want some new shoes that are hard to get, I’m going to have them,” he said.

“He’s [Morales] also in the process of developing our app,” Galoimore said. “We’re trying to make it stand out. We’ve been tweaking it for a while now.”

Galoimore said he hasn’t seen any other sneaker stores that mirror the bundled services VNDS Shoe Spa offers. Every time he adds a new service to his brand, customers request more or the industry introduces new opportunities for him to expand.

“Resell encompasses a lot more than just it’s clothing, it’s shoes, it’s streetwear, it’s music, it’s a whole culture,” he said. “It seems like when I reach a hump, that’s when something new starts.”

Due to an expanding fashion-forward sneaker culture, Galoimore decided to launch his own line of sneaker-inspired clothing under the VNDS brand.

“It’s really for people who like shoes,” Galoimore said.

One of the many keys to Galoimore’s success thus far is networking. The senior said he attends events all over the city where he connects with and learns from other sneaker entrepreneurs.

“It’s mostly about who you have in your network. Over time as you build your network, you can grow your inventory,” he said. “There are a lot of places that tell you when a shoe will be releasing, but in terms of actually getting the shoe from a seller’s perspective? That’s all hustling.”

Because of the mentoring he’s received from others in the industry, Galoimore is open to teaching people with a genuine interest in the ins and outs of sneaker reselling.

“When people ask me for advice, I help them,” he said.

When it comes to the most iconic pair of sneakers, Galoimore opts for the Bred 1s.

For students with entrepreneurial interests, Galoimore advises you to remain consistent and take risks.

“When I first started, I was losing a lot of money,” he said. “You gotta keep taking different routes to achieving your goals. If you feel really anxious about doing something, but you know that on the other side of it, you’re going to be ten times better, you just gotta do it.”