Alumnus Talks a Lifetime of Being the ‘First Latino to…’ 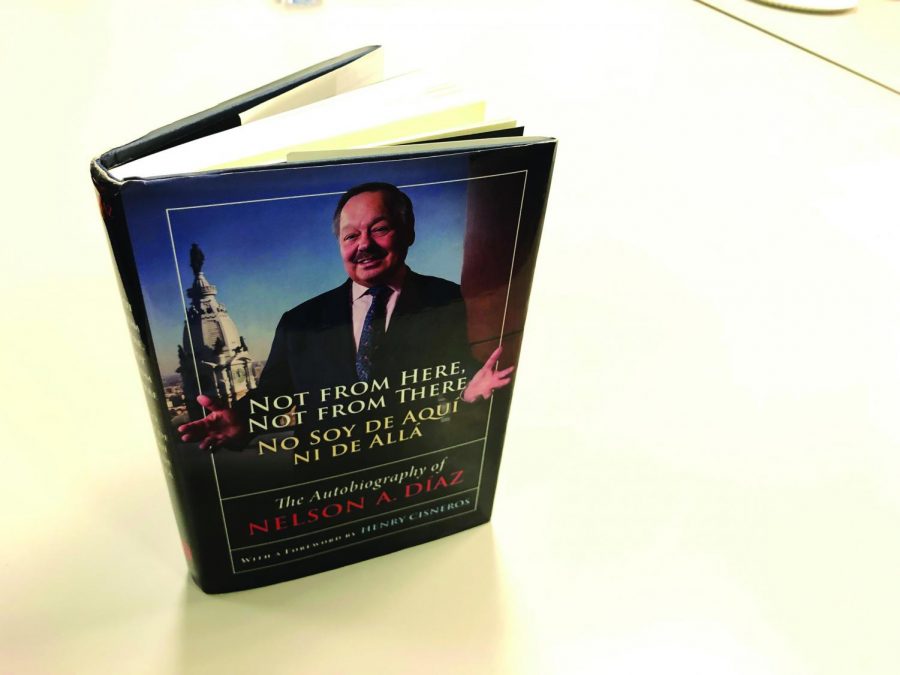 “This is nostalgic for me,” an enthusiastic Nelson A. Díaz said as he looked around the crowded yet elegant ballroom at the New York Hilton Midtown during the 21st Annual President’s Dinner in November 2018.

The 1969 St. John’s University graduate who is currently a director at PECO — an Exelon Company — and a partner at Dilworth Paxson LLP, attended the event with his wife, Sara. They received an invitation from John P. Clarke, professor and chair of the Department of Law at SJU, and one of Díaz’s professors during his undergraduate days.

Díaz said that it had been almost 30 years since he last visited St. John’s or attended a function by the University, but fast-forward four months later and he is giving a talk at the Queens campus about his autobiography, entitled “Not From Here, Not From There / No Soy De Aquí, Ni De Allá,” to current Law School students.

The book gives a detailed account of his journey from growing up in a tenement in New York — after his 20-year-old pregnant mother boarded the SS Marine Tiger from San Juan, Puerto Rico, to the city by herself in 1946 — to graduating from St. John’s University with a B.S. in accounting and later becoming the first Latino student to attend Temple University Law School.

He reflects on his life as an immigrant child and an unarguably successful career as a lawyer and public servant, which was oftentimes riddled with the title of the “first Latino to [fill in the blank]” — such as being the first Puerto Rican judge of Philadelphia in 1981.

Díaz also served as a special assistant to Vice President Walter Mondale on a White House Fellowship in 1977, and was later appointed General Counsel at the U.S. Department of Housing and Urban Development by President Bill Clinton from 1993 to 1998.

The book, which was published last year by the Temple University Press, is about more than just the remarkable story of his admirable career serving underrepresented communities and advocating for Latino representation in the government, with the constant support from his family, friends and mentors. It is a story about the hard work that led him to where he is today, coupled with a feeling all too familiar to many first generation Puerto Ricans and other minority groups in the U.S.

That feeling that he so candidly talked about with the Torch is one of not fully feeling like you are accepted “Here” nor “There.”

“When we come over here, they think, ‘somos Americanitos ahora y no somos Puertoriqueños [Translation: ‘we’re American now and not Puerto Rican’],” Díaz said. “But the same thing happens with Dominicans, Mexicans, everyone. They don’t understand that in order for you to make it in the U.S., you have to push the civil rights movement, you have to demand your right.”

In the preface, Díaz explains that he chose the title of the book not only based upon that feeling, but also as a reflection of the dismissive relationship the U.S. has had toward Puerto Rico ever since the nation acquired the island in 1898.

Díaz further showcases the tug and pull of being from here and there in a particular instance. He was appointed a Board of Directors member of the Puerto Rico Electric Power Authority (PREPA) by the governor at the time, Alejandro García Padilla, in 2016. A year before Hurricane Maria hit and, as he puts it in his preface, “wiped out an electrical grid that was fragile and badly outdated,” he told the Torch he tried to get support from Exelon for the electrical grid. However, PREPA didn’t budge.

“So that sort of shows, hey, ‘no soy de allí’ [Translation: ‘I’m not from there’], because they don’t want to take my advice, even though I love Puerto Rico and I want to do everything I can to help them,” he said.

Yet, Díaz insists that this generation of Puerto Rican-Americans have what they need to help the island. He believes the next generation of Latinos in the mainland, which has rapidly grown in number since he and his family came in the 1950s, can make a difference.

He hopes that with his book, dedicated to his fierce and loving mother, Latinos will feel empowered and inclined to write about their own duo – and sometimes triple – heritage journeys.

“I wrote this so that other Latinos write about themselves,” Diaz said. “I think that it’s important for people to realize that we came here, made contributions, we struggled like we did and we were never, never, never given any handouts. Ever.”