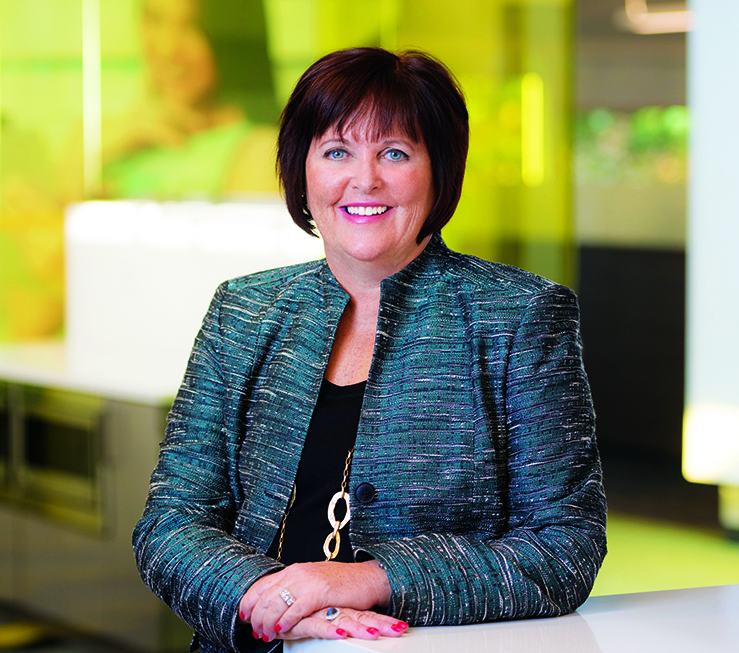 Over 2,000 students are expected to walk across the stage at St. John’s undergraduate Commencement ceremony this year. One of those students will be Margaret M. Keane’s nephew.

Keane is a double alum of SJU, who worked three jobs to pay for college. Now the CEO of Synchrony Financial, secretary of the St. John’s Board of Trustees she is this year’s undergraduate Commencement speaker. Post-graduation, she has worked her way up in the financial world and used her strong work ethic to her advantage.

As a first generation college student and the middle child of six, Keane felt the weight of the financial burden. She grew up in Howard Beach, Queens, and was looking for a school she could commute to that would foster a great community. St. John’s was her best bet — even though there was hardly any parking in the 80s.

That’s not the only difference she noted. The basketball team was also very successful during her time as an undergraduate, and she went to the Men’s Basketball games all the time. “Even though we didn’t have dorms … you felt like you were a part of something bigger. You could find those moments on campus to just be part of the social activities.”

Initially a government and politics major, Keane says she had good relationships with her professors and even scored a job with a congressman. “I love the professors that taught me there … I finished school in May and went back in September.” She hoped to attend law school after graduation, but she landed a position at Citibank in Queens as a part-time debt collector with a wage of five dollars an hour. “They actually came and recruited kids from the campus, that’s how I got started actually through the career office,” she said.

While she didn’t intend to explore finance, she enjoyed her job and the people she worked with. It wasn’t a change in her career choices — it was all about the money. “There was somebody that sponsored me to join the Management Associate program at Citi and that’s really when I made the shift from going to Law School to … deciding to go for my MBA. Because Citi would pay for my degree,” she said. “Nothing about the experience, it was all about the money.”

She stressed that going to school and working at the same time was  difficult to balance, especially with the amount of prerequisites for the major.

Keane joined a group of students taking night classes on campus, and five years later she completed  her Master’s. She climbed the ranks of Citibank for 15 years and later held multiple positions at General Electric. Eventually, Synchrony was launched out of GE – with Keane as Chief Executive Officer.

Although the campus has changed drastically, Keane would fit right into the St. John’s community – be it  1980 or 2019. The campus is full of first generation college students, students with part-time jobs and students who drive home at the end of the night. They have their families on their mind and they don’t want to let them down. They feel the pressure of the need to succeed when they know they’ve put all their money into a good education. And they never forget where they came from.

“I had no expectation of my family helping me … From a pretty young age I started working at whatever I could and help contribute to the family,” she said.

Keane’s father passed away when she was very young; she lost a father and her family took a large financial hit.

As a female CEO, Keane is recognized in the business world frequently because there aren’t many women CEOs. But below her, she sees opportunities for more women, especially in her own company. “Our incoming class this year is going to be 70 percent diverse and more than half of our class is women.”

“I’m a middle girl in between two boys and I think that has something to do with my upbringing,” she said. “My younger brother always says he’s trained me and I think it’s probably true in the sense that I never really let it get in my way.” ‘It’ being the pushback that working women face every day. “I never felt like I was being held back because I was a woman. I just knew that I work hard. And I had that hard-working ethic my whole life that started with how I was brought up … I think I always felt like I had a voice at the table.”

She now sees asserting one’s voice as an important trait for women and minorities. While it isn’t a perfect process, nothing got in the way of her confidence.

“I worked for mostly women at Citibank, so I felt like I had a good set of women I could look up to,” Keane added. Still, she sees the effect of the lack of women CEOs.

Through Synchrony’s recent success, Keane has been able to focus on the more philanthropic aspects of the job. They’ve been able to use their assets to help Middle America families and inner city students with after school programs, as well as better school buildings and shelters for the homeless. But one of her proudest moments was taking care of her employees who were affected by Hurricane Maria.

When it comes to the graduating class of 2019, Keane thinks they’re “better at working in groups” and collaborating. There’s also a knowledge and creative use of technology that she sees this generation bringing to companies like Synchrony. “What worries me .. because it’s so technologically driven, that they may be missing out on relationship building, interpersonal skills… communication, because they rely on the phone.” Her main piece of advice is to “look up” from the phone and develop soft skills.

On May 19, in view of her nephew and sister, another SJU alum, Keane will offer her wisdom to the new graduates, from all that she’s learned on her way to the top. She wants them to know that they should never sell themselves short, because she never did.