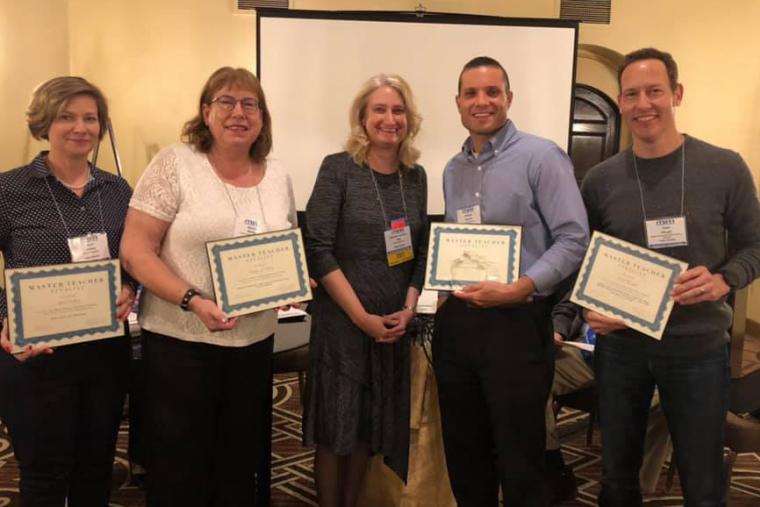 When professor William Murphy presented his Legal Shark Tank lesson to the audience at the annual Master Teacher Competition at the 2019 MBAA International Conference, he was up against competition that included a professor who taught business law using Harry Potter – tough competition indeed.

Murphy’s teaching exercise proved to be a hit, as he received first place recognition in the competition for this creative classroom endeavor.

Murphy, assistant professor in the Division of Criminal Justice, Legal Studies and Homeland Security, attends the annual conference each year.  It is a gathering of multidisciplinary leaders from around the world in which innovative research and creative teaching methods are shared.

Legal Shark Tank is one of those creative teaching methods. In this immersive exercise students spend the semester studying a case file in order to pitch the case to a panel of “sharks,” or in this case, attorneys.

Legal Shark Tank was conceived after Murphy began teaching Legal Research and Writing II and was faced with the difficult task of figuring out how exactly to approach the course.

How do you teach someone how to write? As Murphy put it, it would be like asking Lebron James to teach you how he shoots.

Murphy was brainstorming different ways to go about teaching the course with his wife, who also practices law, while watching the hit ABC show, Shark Tank. It was then that he had his lightbulb moment.

The project’s inception mirrors the show in its format, but instead of pitching ideas to venture capitalists, students will present a hypothetical personal injury case to a panel of practicing attorneys, who each represent their own law firms, to take their case.

Students are given the case file and spend the semester getting to know the case from front to back. They identify the legal issues that are relevant to the case, as well as any learning to anticipate any obstacles they may face while attempting to pitch their cases.

“The way it simulates the professional world is that in a law office there’s going to a lot of cases coming in… so what students will be tasked with a lot of times is conducting that research to evaluate the strength of a case, and then presenting that case to a senior partner or senior attorney,” Murphy said.

As they go through the case, students are learning how to convey information in a precise manner, be quick on their toes and make legal predictions.

Law was not always in the cards for Murphy, who was the first person in what he calls his blue-collar family to attend college and graduate from law school.

Earning degrees in both journalism and acting felt like a perfect combination for Murphy, who was able to both hone his skills as a writer and as a public speaker.

Upon graduating from college, Murphy received an offer from a friend to work as a speech writer at the Clinton Foundation. For several years, he wrote speeches for the former president.

“It was a great experience, but at the end of the day I like the talking and performing parts of it —I felt like, I wrote this speech, I want to give it.”

Law school at the Touro Law Center was the next step, followed by time as a litigator.

Murphy knew he wanted to teach, and was inspired by other professors he had had in his educational journey.

“I like to create a learning environment that’s fun, inviting, engaging, and almost distracts students from the fact that they are learning. I want students to be excited to come to my class, kind of on the edge of their seat, not knowing what to expect,” he said.

Murphy knows exactly how dry it can sometimes be to both teach and learn about law. The Legal Shark Tank is a way for students to dive right into a case in a fun and memorable way that reading through a textbook can fail to be.

Murphy is not someone who runs from failure. On the contrary, he fails openly, and often, and hopes that students can see him do so and not shy away from their own failures.

“There’s a lot of stuff I try that doesn’t work, and I want the students to be honest with me and tell me it doesn’t work,” he said. “Then they also see when I come back in the next week and try something new, or even a refined version of what I did, that I’m not scared to try again. When they see that I am a human, I make mistakes too and I won’t be deterred by them, I think it imparts a good message to them as well.”

“I think some of the best feedback I’ve ever gotten from students in my class is that they never feel uncomfortable raising their hand because they’ll look stupid or they’ll have the wrong answer,” he continued. “That makes me really proud as a professor, because that’s how you learn –from making mistakes, by getting it wrong the first 99 times.”