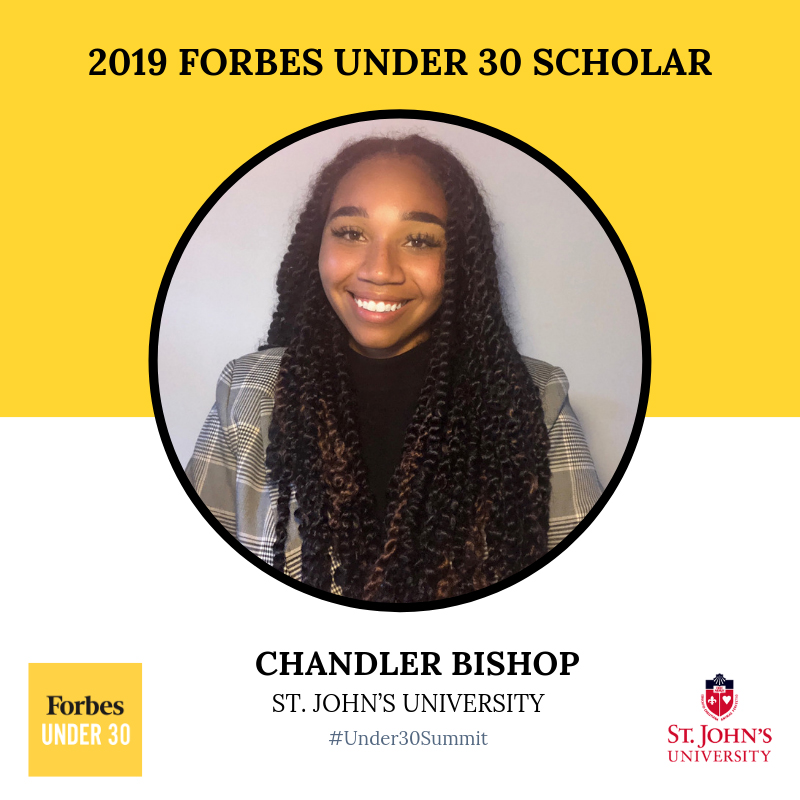 She walked hastily with her hands full with a plate of deli sandwiches to the nearly vacant table, occupied solely by the Creative Director of Nickelodeon, inviting herself to accompany him during their one-hour lunch break.

With confidence, she introduced herself to the grey-haired black man, who looked relieved to be on lunch break after participating in a panel discussion. After all, the eager attendee herself dreamt of pursuing the same occupation as the man before her.

It was there at the 2018 Circle of Change Leadership Conference, a leadership development program, that Bishop met her mentor, the same man who nominated her in efforts to hold the title of Forbes 30 Under 30 Scholar for St. John’s University. (She has asked that her mentor remain anonymous.)

“I didn’t focus on me. I think that’s where people miss the mark in networking,” Bishop said. “It’s important to get to know the person – to see if that is someone you would want to model your career after or get advice from. Because they could have a completely different idea of what you would want the trajectory of your career to be.”

Bishop asked Nickelodeon’s Creative Director an array of questions that were industry specific, and not career specific: “how did you climb up in your career?” and, “did you see this new Nike campaign, what do you think about it?”

She left the 2018 conference with a new contact; someone who, after exchanging a couple of follow-up emails with, became an important part of Bishop’s involvement in the competitive Forbes scholarship program which allows nearly 1,000 college students to attend the Forbes Under 30 Summit in Detroit, Michigan from October 27th-30th.

The 2019 Summit is not your average conference. According to Forbes.com, it’s a private music festival with performances from artists such as rapper 21 Savage and singer Normani; a convention of A-list speakers such as world-famous athlete Serena Williams and NBA All-star Kevin Durant; and a world-famous food festival and place of community service.

“I like to challenge myself,” Bishop said when asked about applying to such an inclusive program.

The senior advertising major wrote three essays and gathered three letters of recommendation to participate in the “nomination-application process.”

With her immense history of working in the media, food distribution, fashion and beauty public relations industries, Bishop’s resume includes internships in public relations, copywriting, marketing and most recently in ad sales for the illustrious WarnerMedia, formerly known as Turner. Bishop believes this diverse resume submission was one of the reasons why she’s a 2019-2020 Forbes Scholar.

“It’s good to be well-rounded, since technology is replacing a lot of the human parts of a job. If you are only good at one thing, I think you are putting yourself in a corner because 5 years down the line, the market could change completely,” Bishop explained.

“It’s also good to have a well-rounded network. You never know when you’re going to draw advice from someone … help from someone … or get input from different fields.”

The majority of the Forbes 30 Under 30 scholars 2019 list attend top schools such as Stanford, Harvard and the Massachusetts Institute of Technology.

For this reason, Chandler believes she had to work twice as hard  to qualify for the position. “For something like this, I’m seen as an anomaly, so I have to work even harder to prove that I’m not an anomaly – I’m the standard. However, we don’t get thesekind of opportunities to show we are the standard.

“I was curious if my little St. John’s degree was going to hold weight. I’m going to use this achievement to show that if you work hard, that’s going to trump all the other factors,” Bishop continued.

Personal identity was  something Bishop touched upon in her submitted essays. “I used to be nervous about it, but now I think it’s one of my biggest strengths because its helps me differentiate myself from all the other applicants that probably came from two-parent households,” she said.

Bishop was raised by a single mother and with two-cards stacked against her, she had to do a lot on her own. “It showed my work ethic and how bad I want to be successful.”

Bishop doesn’t credit only herself, though. She mentioned her mother as the basis of where she inherits her work ethic. “Growing up with a working single-mom showed me that you can have a hard story and no one is going to give it to you just for that – you really have to work hard.”

As Bishop enters her final year of college and her fifth internship, this time at Viacom for television network BET, she gives this piece of advice to students who are seeking opportunities: “Figure out who you are first and run with it.”