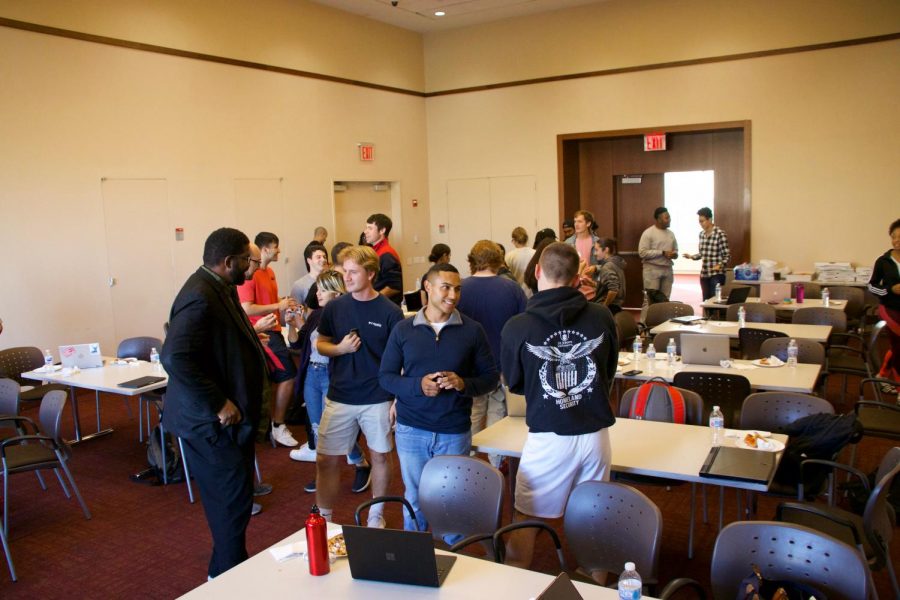 What should I do after I graduate? How can I raise my GPA? How do I get this job?

Students ask themselves these questions constantly. Amidst hectic course schedules and part time jobs, the only thing on people’s minds seems to be how to get the highest grades, make more money, or snag the perfect job right after graduation.

The St. John’s University Society of Growth and Success doesn’t want you to ask these questions. This organization begs the questions: who am I? What is my purpose? What will be my legacy?

“That’s the main purpose of our organization — to help people find the answers to the questions that they ask about themselves.”

The Society of Growth and Success was founded by Rodriguez last September under Campus Ministry, and its mission is to guide students towards success through personal and interpersonal growth. This growth is encouraged in the form of collaborative group workshops, in which students are asked to look within themselves and be vulnerable with one another.

“People don’t usually trust each other right off the bat. I have no idea how [Rodriguez] did it, but I’d like to learn how,” Junior Amirah Ishmail said. “Literally we all showed up and were like, yeah, this is legit. We’re gonna trust each other and do this together.”

This organization aims to aid students in areas such as self esteem, performance enhancement, goal setting and achievement, community building, and leadership, all of which they believe begin with personal discovery – identifying one’s true self.

One example of these types of workshops is one of the ones conducted last semester in the spring, called, “What’s Your Story?” Students were asked to write down answers to three questions, beginning with, “what is a story that you tell the outside world about yourself?”

This outside world includes social media platforms like Instagram and Snapchat, where people usually present their best selves. After discussing this persona that they present to the outside world with another student, participants are then asked to write down the person they tell themselves they are in their minds.

“There’s a lot of things that we talk about in our heads that we never put on social media because everything on social media is considered to be hyperreal,” Rodriguez said. “It’s like Disneyland, and everybody posts stuff that is the best part of their life, meanwhile inside of them there’s a whole other story that they’re telling themselves about themselves.”

Lastly, students are asked to contemplate the story that they want to tell themselves about themselves. For some students, the differences between all of their “stories” was shocking. Students then came together to discuss how to bridge the gap between these three and, as Rodriguez puts it, “level-up.”

Members of the club, sophomore Vincent Carmine Muscarella and senior Anthony Curmi can attest to the open and supportive environment of the organization.

“I know when we’re in the group that other people can help me. Sometimes I like to solve my problems by myself but there comes a time when I need others in my life to help me get through the hard times,” Carmine Muscarella said. “So I definitely like opening up to the organization.”

“I’m kind of the opposite of him,” Curmi countered. “I definitely feel like I have a hard time opening up, but I think the environment that is created with this organization helps us realize that everyone’s going to understand and try to help you, and that, it helps you self improve upon your goals and improve on being the best version of yourself.”

These big, philosophical questions that people often ask themselves – like the dreaded, “what’s my purpose?” – can feel too big to tackle for some. What sparked Rodriguez’s desire to even begin to do just that stems from a desire to understand what makes some people so successful.

“Why are some people achieving more than I am, and how can I get to that level?” Rodriguez said he asked himself in his junior year of high school.

“What I’ve noticed is that we’re all born relatively with the same amount of talent, but what separates those who achieve a lot from those who don’t achieve much is that they have strong self awareness. They know who they are to a tee.

“It’s not until studying yourself, and reengineering yourself to become that winner, that you can start finding the answers to those questions. My question then became, how can I help other people get to that level while I also try to get to that level?”

Rodriguez, who could be considered quite successful himself as a member of ROTC, The Presidents Society and a catholic scholar and plunge leader, felt the desire to ask these questions of his peers, in hopes that they would be able to find themselves in their answers and subsequently reach success.

But what exactly is success? For this organization, success isn’t measured solely through the numbers.

“It’s not so much about the numbers to me, it’s about the impact,” Rodriguez agreed. “Even impacting one person, that’s doing my part, doing our part.”

With already one speaker under its belt, Frank Kurre, senior executive at Protiviti and a Catholic deacon, the organization aims to have another handful of speakers come in and give a new perspective to its members. Other goals include completing service as an organization and more workshops that continue to push its members.

“I think the reason I joined this club was to get out of my comfort zone,” Curmi said. “Ever since I’ve joined this club I’ve actually been more open and willing to do things. I’m now e-board of another club and just became a volunteer fireman, and that was something, like, I’ve always wanted to do but was always scared to do, because I was just in my own box.”

“If there’s one last thing students should know and think about, it’s ‘what is the story that you tell yourself about yourself?’ That’s all, that’s the whole goal here,” Rodriguez said. “To try and discover that story that no one ever talks about and rewrite it.”