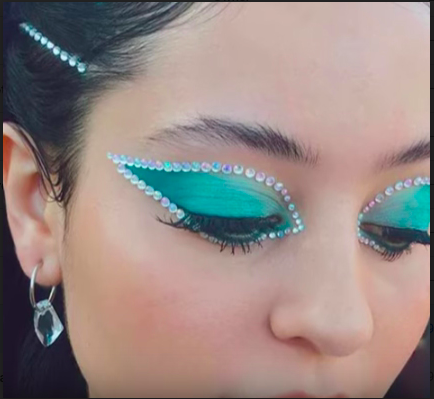 Drugs. Alcohol. Sex. Wild teenagers. (Don’t worry, no spoilers here). HBO’s summer hit show Euphoria gave us a deep, hyper-real dive into addiction, love and growing up – but nothing seems to be more noteworthy when post-binge watching than the intense, jaw-dropping makeup in every episode. It truly is unlike any other stylistic trends on television.  It’s ballsy and brazen, eclectic and alluring.These customized looks for each character created a trademark for the show and the fashion world.

In literature, there is always some form of symbolism.  Euphoria’s makeup is a symbol of individuality, boldness, and fits with the overall hypnotizing theme of the show.  Whether it is a signature wing with gems like Alexa Demie’s character Maddie, or playful, neon makeup like Hunter Schaefer’s character Jules, the looks are meticulous and runway ready.  The iconic look of Rue (Zendaya), in particular, includes dark outlines underneath her eyes with glitter tears. It captured all of our eyes from the very beginning, and creates a sense of the beauty inside of her despite her addiction; hence, the glitter.  Because the show is called Euphoria, the makeup also accentuates the triggering and shocking moments of the show through their use of colors, and where they are accented on the characters’ faces. The makeup enhances the surreal experience of the show, especially during closeups where you can see their beautified faces.  No matter what makeup artist Doniella Davy chooses, binge-watchers are spellbound. Each character was designated a look based on their personality, and the audience experienceds a sense of relatability to these characters through their mannerisms and their fashion.

So how can you recreate these looks? Think bold, electric, daring. Try using vivid cream liners and eye shadows to create a pop on your eyelids. Several brands, such as NYX or Millennial favorite, Glossier, offer cream shadows that will make your eyes pop. If you’re feeling audacious, try creating abstract art on your lids with colored liquid liner to mimic some of Jules’ geometric masterpieces. Rhinestones and brow gel will be your new best friends, as will lip gloss and dewy cheeks. These style choices can look intimidating, but more than anything, these Euphoria recreations are meant to be fun – so don’t be afraid to take risks and stand out.