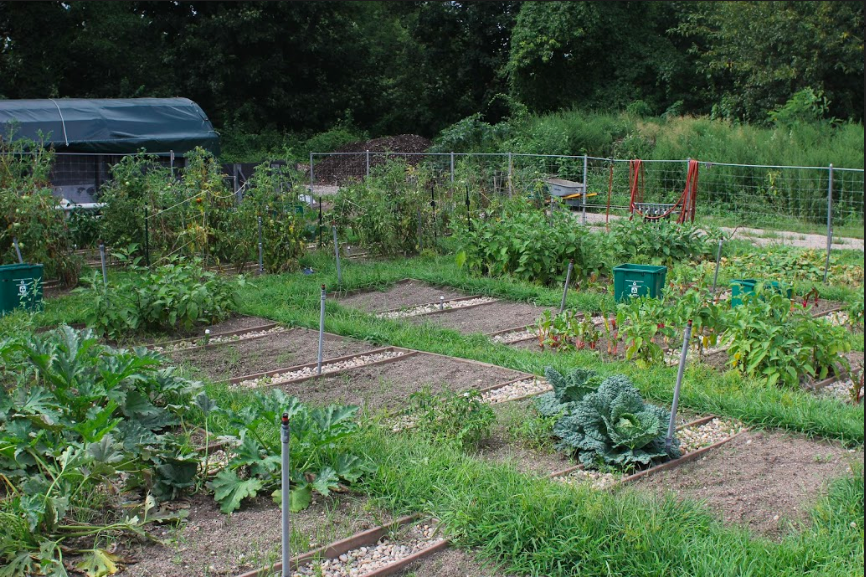 If you live on campus, you may have noticed a small field of crops being grown near the Residence Village and Red Storm Softball Field. It consists of 50 beds of soil that are each four by seven feet with grown produce like kale, romaine lettuce, bok choy, tomatoes and much more. This is the University’s organic garden. Yet, most of St. John’s students and faculty don’t know it exists.

The organic garden is nurtured and maintained by the student workers in the Office of Sustainability along with student volunteers of the Office of Academic Service Learning.

The produce grown in the garden is donated to the St. John’s Bread & Life, a food pantry and soup kitchen located in Brooklyn. The donations aid in support for their food pantry, which serves the hungry, homeless and working poor. Tom Goldsmith is the director of Energy and Sustainability and is responsible for coordinating planting, harvesting and delivering food to the kitchen.

“Through their hands-on garden projects, students gain a sense of achievement and personal engagement in addressing issues of food injustice such as food insecurity and each growing season,” Goldsmith told the Torch in an interview. “Over one thousand pounds of fresh organically grown produce is donated to Bread & Life.”

Construction of the garden began in July of 2009, and in the following year, then RSM provost, Julia A. Upton, recommended that the garden be doubled in size. In 2011, members of Student Government Inc. at the time suggested that the produce grown in the garden be donated to St. John’s Bread & Life. On April 25 of this year, St. John’s Dining posted on Facebook sharing a video of the acts of students and the staff of Montgoris Dining Hall as they prepare wasted food for composting.

“First, Monty’s staff recovers food scraps (both pre-consumer & post-consumer waste),” the post said. “Next, students collect food waste daily and process it through the pulping machine [and] finally the compacted waste is ready to be mixed for compost that is used around campus.”

These services were recognized by the Office of Academic Service Learning, in which it became a project for students to volunteer and receive Academic service hours.

Eleni Moukas, senior, who signed up for AS-L hours at Montgoris Hall during her freshman year, explained the work she had done with other students and advocating for food preservation.

“It was my job to show the students how to scrape the leftovers on their plates into a green composting bin,” Moukas said. “More importantly, I talked to them about how important it is to not waste the food on their plate. One way for them to continue to do this is by being cognizant of how much they put on their plates in the first place.”

She expressed her admiration of the work done and encouraged by the program, which inspired her to write her senior thesis on the topic and was offered a position as a student worker.

“Even though the work was arduous and physically laborious, I thoroughly enjoyed it because I knew that it was all going to help the food insecure individuals in society and our environment at large,” she said.

The main premise of the garden project for students involved in AS-L is that they get to achieve outcomes that serve awareness based on food security concerns. They’re also encouraged to learn skills that can further allow them to initiate change.

“I believe our main purpose to be food recovery,” said Jamie Sculco, a rising junior and student worker for the Department of Sustainability.

Sculco shared a few photos of facts that were posted by Goldsmith around Montgoris Dining Hall. One photo states that the average U.S. household throws away approximately $2,000 in food and beverages each year. It also includes that the average person wastes 20 pounds of food per month, which is equal to 42 bananas.

Afterwards, the compost is used as organic fertilizer for the garden to grow vegetables. According to Goldsmith, 95 percent of the food waste on campus is recovered.

Richard Stalter, a professor of biological sciences, has also provided much guidance to those involved with maintaining the garden. He has effectively served by beginning the gardening season mentoring members of the Earth Club.

“The students, mostly Earth Club members that I mentor, start the seeds in early spring,” he said. “Generally we have a turnout of 30 to 40 students.”

These seeds are in starting trays that are then moved to the green house and are planted in the garden when dangers of frost is past.

“The students also prepare the 50 raised plots in the garden prior to planting,” Stalter said. “Again we have an excellent turn out, demonstrating our student’s commitment to the Vincentian spirit of giving.”

While the garden is closed for the next few months, Goldsmith is building a Sustainability Committee for student and faculty involvement which is open for everyone to join. Beginning in April,  anyone interested in planting will get to volunteer on planting day.

“This day involves a lot of cleaning up the weeds that have been growing all winter long and flipping, refurbishing, and replenishing the soil,” Sculco said. “Lastly and certainly most excitingly, everyone gets to partake in the planting of vegetable seedlings.”