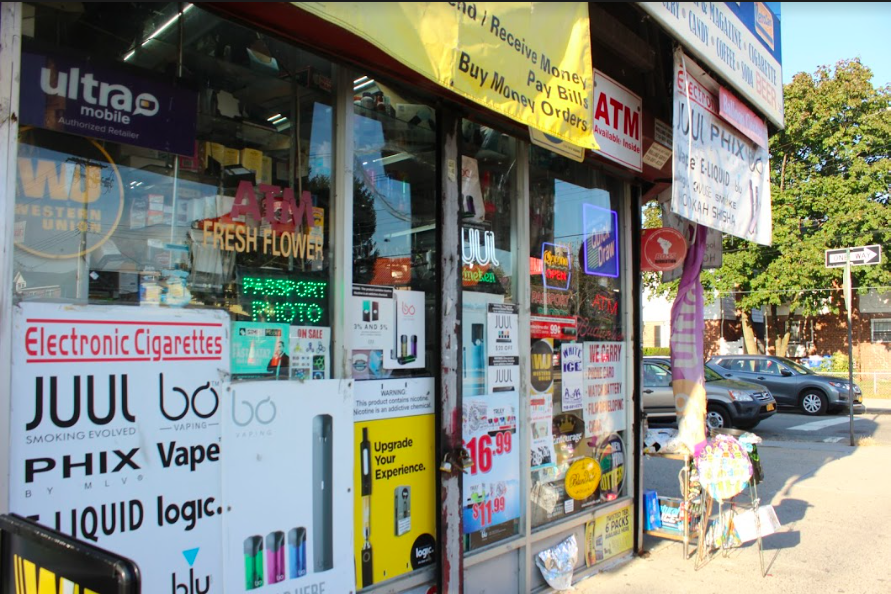 P&M Convenience Store, on the corner of 169th St. and Union Tpke, advertising e-cigarette devices to consumers, including Juul products.

Vapes – we’ve all seen, smelled and heard them. You may have been in the library and heard the crack of someone’s Juul in the cubicle across from you, or maybe you’ve walked past someone on the strip who left a cloud of sugary-sweet smoke behind them as they passed by. If you haven’t tried it, you probably know someone who has. In the past few months you may have also known someone who up and quit vaping after a mysterious illness attributed to the trend began dominating headlines across the country.

The Centers for Disease Control and the Food and Drug Administration are currently investigating a mysterious outbreak of lung injuries across the country that appear to be associated with e-cigarette use. The CDC recommends that people refrain from using e-cigarettes, or vapes, that contain nicotine, as well as those that contain THC.

On Tuesday, Oct. 8th, New York State officials reported that a 17-year-old in the Bronx died from a vaping-related illness, the first fatality in New York and the youngest person in the country to die from this outbreak. The death total has now increased to 26, and the overall number of reported illnesses is 1,299 cases in every state but Alaska, as of Oct. 8th.

Some symptoms of this illness can include coughing, shortness of breath, chest pain, vomiting, abdominal pain and fever, among others.

Vaping is the act of using an e-cigarette, vape pens and personalized vaporizers. The Juul is one of these e-cigarette products that has risen to popularity since its inception in 2017, due in part to its inconspicuous, compact design. One Juul pod contains 20 cigarettes worth of nicotine, according to anti-tobacco campaign The Truth.

While its creators say that the device is intended for people who are trying to quit smoking cigarettes, its tiny presentation can also be said to be the reason why so many underagedusers have taken to the device. Vape THC has also risen to popularity, likely due in part to this same convenient and inconspicuous presentation. The majority of cases of illness and death involve THC vapes.

The death of the Bronx teenager is reflective of statistics from the past three years showing an uptake in underage vaping. According to The National Institutes of Health, 37 percent of surveyed high school seniors in 2018 vape. The CDC has determined that 15 percent of the reported cases of vaping related illness have been under the age of 18.

Students may not even think twice about this issue, seeing as the University allows smoking on campus. Other universities in the New York City and Long Island areas, including our neighbor Queens College, all of the CUNY schools, Stonybrook University and NYU are all tobacco-free campuses.

The University’s student code of conduct says that while smoking is prohibited in all University buildings, it is allowed 30 feet from building entrances and windows. This policy includes the use of e-cigarettes, vape pens and vaporizers.

“I think people just see it and don’t think it’s a big deal, they see someone doing it and they’re like, ‘oh pass it to me.’  But clearly it does affect you eventually as time goes by. It becomes like an addiction type of thing,” Pushpita Pal, senior biomedical studies major, said. “Mostly teenagers in our age group usually do it. I’ve seen that more and more.”

Several popular convenience stores in the area surrounding campus sell these products and advertise them heavily. Right outside of gate six, all three of the convenience stores that share the same strip on Union Turnpike sell Juul pods and other e-cigarette products, with their windows covered in advertisements for the items.

In a statement to the Torch, Executive Director of Wellness and Assessment Luis Manzo expressed no current plans on part of the university to address the issue before the state of New York City act.

“The University is monitoring potential changes to New York State and City law regarding the sale and distribution of e-cigarettes and vaping,” Manzo said. “If necessary the University will adapt its policies accordingly.”

As the issue develops, litigators, vape users and St. John’s will all be keeping a close eye on the effects of vaping and the outcome of this mysterious ailment. Manzo did make a note of past initiatives the University has taken to educate students on health issues related to tobacco.

In a press conference Governor Andrew Cuomo held after the death of the Bronx teenager, he gave a grave warning. “Young people have to know you are playing with your life when you play with this stuff … best case scenario for vaping, you get addicted to nicotine … Worst case is, you vape and it kills you,” Cuomo said.

New York State has even moved to ban flavored e-cigarette pods, an initiative to curb teenage vaping that was blocked by a state appeals court before it could take effect.

The question that remains to be answered for many vape users — should you stop vaping? The answer depends on who you ask.  Some SJU students don’t think it’s worth the risk.

“I do think that it has worried me because I have a lot of friends that do it. I don’t think that it’s worth the risk,” Tatiana Brown, junior legal studies major said. “Students should definitely be cautious and make sure that if they are going to vape that whatever they’re vaping is safe.”