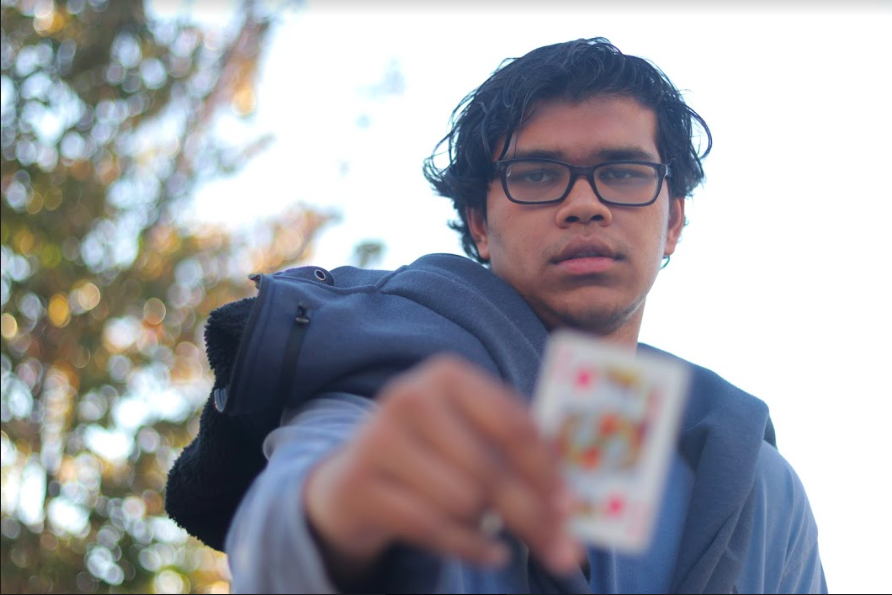 Toushis Azad has performed magic for celebrities like Lil Pump and DJ Khaled.

“It shows how anything could just happen.”

On the evening of May 10, Toushis Azad drove his white Nissan Altima to the Meatpacking district in Manhattan. With his concert ticket ready, the student was eager to see Miami rapper, Lil Pump, perform on the Terminal 5 stage. With his own increasing social media presence across Instagram, Youtube and TikTok, “lyrical magician” Azad was used to the spotlight, though, the 6-foot-4 magician did not know that he would be performing his famous card tricks in front of the rapper that evening.

After the Lil Pump’s performance, Azad showed a couple of security guards magic tricks backstage. The guards recognized the student, who had done magic tricks behind the curtain at prior concerts at Terminal 5.

Glancing over with camera in hand, one of the concert photographers began watching Azad perform magic tricks, and asked the magician to perform a trick for him.

Pick a card – the photographer took a card out of a deck of playing cards and memorized it. After putting it back, Azad shuffled the deck. Then, the photographer picked another card, different from the original card he had chosen before.

“I told him to touch the card one more time,” Azad said. Remarkably, this time, the card changed to the original card the photographer picked out. The photographer suggested the magician show Lil Pump a trick.

“He was baffled by it … next thing you know I’m on the tour bus with Lil Pump doing magic for him,” Azad mentioned. “It was so unexpected.” The video Azad posted on his Instagram account from that evening this past spring on the rap stars tour bus now has nearly 15,000 views.

It turns out that not all magicians wear red capes, black top hats and hold a magic wand. Azad believes a magician is, “someone who practices their craft for a number of years, someone who perfected the art of a craft. A magician could be anyone.”

For Azad, it’s been ten years since he began perfecting his craft. His journey started when as an eight-year-old, Azad wanted to do something for his third grade talent show.

‘Why don’t you do magic?’ his father asked.

To encourage his son to learn the art of charming, Azad’s father bought him a Criss Angel MINDFREAK Professional Magic Kit which contained over 400 magic tricks and video downloads taught by Criss himself.

Today, Azad incorporates some tricks he learned from Angel’s kit with his own style while involving tidbits of magician David Blaine’s street magic within his own routine.

“David Blaine’s different style in magic has inspired me … how much he practiced his craft for 20 plus years … where he knows how to hold his breath underwater for 17 minutes – it’s really impressive,” Azad explained.

If you take a scroll through his Instagram account, with nearly 7,000 followers, or his TikTok, with upwards of 19,000,  you’ll see that Lil Pump was not the first celebrity he performed magic for, and it surely won’t be the last – in the meantime, you can find him around campus, perfecting his magic.