One of the only Black women visit all 195 countries 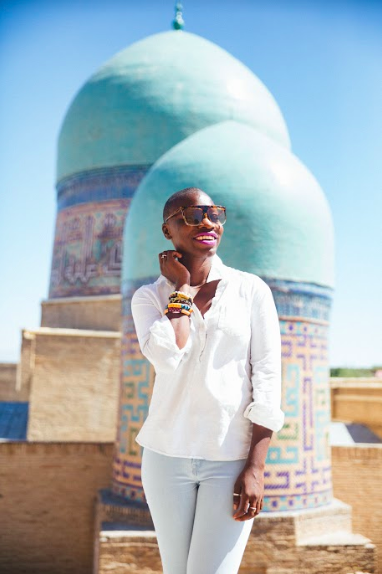 Jessica Nabongo graduated from SJU in 2005 with a degree in English Literature.

For Jessica Nabongo, the title of “world traveler” suits her perfectly. Back in October of this year, Nabongo said she became one of the first black women to travel to all 195 countries in the world. Her non-stop journey, which started two-and-a-half years ago, is documented on her Instagram account and blog, thecatchmeifyoucan.com.

Traveling has been a part of Nabongo’s DNA since she was 4 years old. By the time she graduated from high school, she had already visited seven countries. Nabongo, who graduated from SJU in 2005 with a degree in English literature, lived in Japan in her early 20s teaching English, then in England pursuing a masters degree, followed by Benin in West Africa and later Italy.

Nabongo set her official goal of visiting every country in the world in February of 2017.  Before her journey even began, she had already been to 60 countries. On October 6 she achieved her goal at the age of 35. Seychelles, an archipelago country off the coast of Africa, was country 195.

Since achieving her goal last month, she’s gained a lot of attention on social media. She currently has 175,000 followers on Instagram and has appeared in publications such as CNN, VIBE, the New York Times, NBC and many more. Nabongo says she’s happy that people are inspired by her journey.

“I’ve been public with my life for over two years now by sharing my travel experiences,” she said via phone interview with the Torch. “Going forward, I plan to be thoughtful in how I use social media.”

The Detroit-native carries both an American and Ugandan passport and chooses which to use based on ease and cost of entry. She has a host of items that she brings with her on every trip. She doesn’t leave home without her compressions socks, noise-cancelling headphones, a scarf and a reusable cup and water bottle.

Nabongo described in a previous interview with CNN that her travels have been funded by various initiatives, including selling branded merchandise and through her travel company, Jet Black, that organizes small group tours in Africa.

With traveling to every country, there’s bound to be favorites and least favorites. “I don’t like to talk about the least favorites, but there are at least 30 that I don’t need to go back to,” she said.

When it comes to naming favorites, Nabongo says she can’t.

“The world is so vast and there are so many positives. Each country is so diverse and there’s no singular thing in the world to pinpoint as better.”

However, she did say that the best food she had was in Georgia, Japan, Senegal, Italy and Thailand – in no particular order.

In an Instagram post, she talked about the concept of traveling solo as a woman. At the time, she had traveled solo to 85 countries spanning six continents. Her first time traveling solo was in 2007 to London, Paris and Madrid. Her first full solo trip was to Costa Rica in 2009.

“People often ask me the best countries for solo travel and I think that anywhere in the world is fine for solo travel depending on your level of comfort with the culture,” said Nabongo in a post. “If you are American you may be comfortable in places that someone from the Middle East may not be and vice versa so to give a list would be doing a disservice to the huge diversity of my followers.”

As a woman of color, she says she had no trouble when she was traveling. Issues with immigration were frequent in her travels, but she says overall, it’s a kindness perception.

“The world is not a scary place. If I can do it, anyone should be able to go where they want to,” she said. “We hear these negative stories, but that’s one person’s story. You have to take negative stories with a grain of salt.”

Nabongo estimates that there are around 150 people who have reportedly been to every country, according to CNN – the majority being white European men. While this has been a dream come true, Nabongo advises to dig deep and ask yourself why you’d like to travel to certain places.

“People tell me that I’m living their dream. People see what others are doing and want to go just because it looks nice,” she said in an interview with VIBE. “Ask yourself why you want to visit a certain place and how it will inform your trip. Don’t just copy others, do it because it motivates you.”

Two-and-a half-years, 350 flights and three passports completely filled with stamps later, Nabongo is hoping to settle in for the time being.

“I’m still processing it, but it feels monumental,” Nabongo said. “I’m really happy to be done, but I am exhausted and focused on resting.”