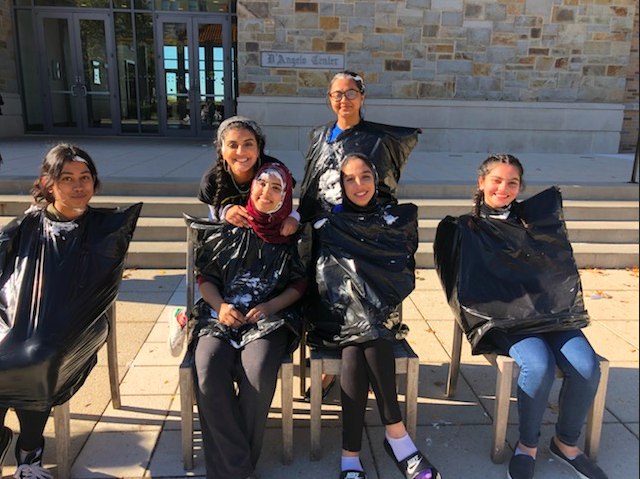 The MSA e-board got “pied” by participants during Charity Week.

St. John’s University’s Muslim Student Association celebrated the end of an eventful marvel-themed annual charity week on Friday with a charity Venmo challenge and an all-girls volleyball game last Saturday. The campus-wide charity week was in action from Oct. 21 to Oct. 25, with one last charity basketball tournament to take place on Nov. 2, expecting to amass all MSA members and charity week participants to end the charity events on a strong note.

The campus MSA is known to host one of the most prominent religious communities on campus and the purpose of the organization hones in on the act of charity and building a stable connection to God. This is denoted through monthly events spreading insightful Islamic knowledge, weekly Friday prayers ensemble-style and several dinners and meetings engaging all MSA members.

Charity Week is a non-profit fundraiser raising donations for orphans and children in need, and it is operated in partnership with the organization. Islamic Relief USA.

“The biggest idea behind charity week is the idea of working together to enjoin our powers as individual beings to becoming a collaborative force of united people,” Nusrat Nasir, Community Service Chair, explains.

This correlates with their theme of their superhero-type alliance to serve people in need. They quote the practices of the Prophet Muhammad who was known as the ideal Muslim pupil who helped the poor despite being quite impoverished himself. This idea is resonated throughout the entirety of charity week as both Muslim students and Non-Muslim students are encouraged to contribute to the cause.

The week began with a fun bake sale during Monday’s common hour, serving delicious cupcakes, cookies and brownies all provided by their very own MSA members. The Art for Charity/Henna event was held Tuesday night in the D’Angelo Center with various artworks displayed and auctioned for and art supplies/materials being sold. There were henna stations and many tables full of unique artistry on display.

Wednesday was the ‘Pie the E-Board’ event where participants had the chance of pieing the faces of the e-board of the MSA or any other participant of their choice. The Sugar Rush event was held on Thursday during common hour and presented a variety of sweet treats featuring donuts, candy, waffles and parfaits for all donors to enjoy. Lastly, Friday hosted an unforgettable Fuchka Friday, handing out the deliciously savory South-Asian snack for everyone to enjoy and relax for the day.

The fundraiser was not over yet, as members awaited the exciting basketball tournament taking place at Taffner Field House on Monday, technically making their service week a little over a week. The MSA plans on announcing total contributions at an event planned for later in November, the details of which are to be announced.

Not only has this week showcased an amazing field of unity across campus; it strengthened the value of charity through impressively organized events.