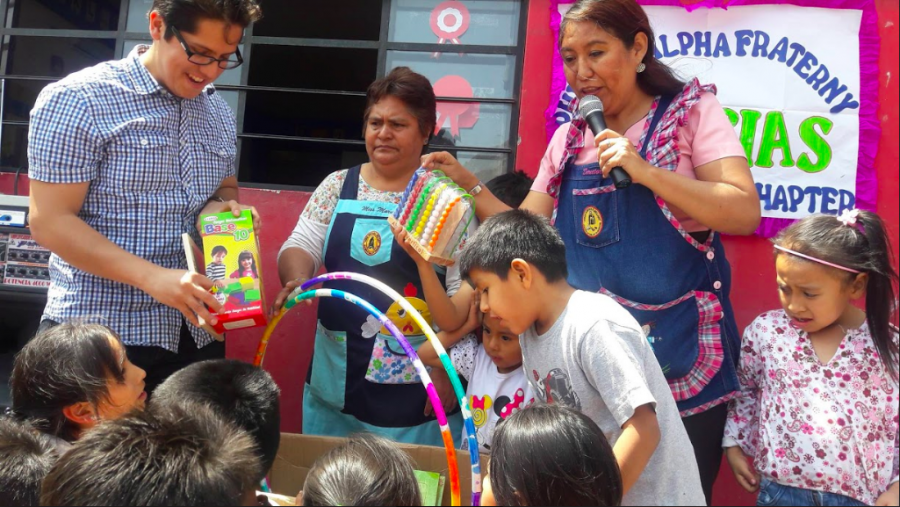 The oldest Latino fraternity in existence, Alpha Gamma Chapter of Phi Iota Alpha Fraternity, Inc., has an established chapter at St. John’s and is empowering the Latinx community by achieving its highest fundraising goal after a decade long campaign to improve education for students in Santa Eulalia, Peru. They also have had a large reputation of contributing to other programs to support underrepresented students.

In the summer of 2017, the St. John’s Chapter of Alpha Gamma of Phi Iota Alpha Fraternity, Inc. enacted a project to help improve the lives of many students in the Jorge Guevara Mellado School, which consists of a preschool and elementary school in Santa Eulalia, Peru.

“The conditions they studied in were way below the standard that any child should have to deal with. They were packed in a torn-down building that lacked fencing, exposing a cliff that endangered children,” said Ricardo Canelo, a graduate member of the Omicron Chapter of Phi Iota Alpha Fraternity, Inc. at NYU.

In 2008, the Chapter took on this opportunity and raised $1,700, allowing them to acquire architectural repairments to improve students’ learning environment and repair the various safety hazards that posed daily threats to the students.

The initial act created a long-lasting relationship between the Jorge Guevara Mellado School and the St. John’s Chapter of Phi Iota Alpha in which the Chapter raises money for the school on a regular basis.

The founder of the project, Waldo Guevara, is a St. John’s alum who graduated in 2010. He was motivated to start this project to help kids have a better future. This initiative is especially important to Guevara.

“I lived in the town where the school is located and would have gone to the school if I wasn’t brought to the USA,” Guevara said. “I feel it’s my duty to help the students of this school have a better future like I did.”

Guevara strives to help students in need as he understands their position and acknowledges that monetary funds are extremely difficult to obtain.

The Chapter focused its efforts on an international school in Peru due to Guevara’s personal ties and investment to the school as his grandfather helped lead the construction of the first school. He had donated part of his house to be a part of the school so the students could have a place to learn.

Guevara also wanted to highlight the extremely high poverty rate in Peru, especially “where the rural poverty rate is 54 percent,” as reported by the New York Times.

The Chapter continued their efforts and in 2013, raised $800 to purchase backpacks for students. In the following year they provided more than 320 sandwiches and juices for students’ school lunch.

The current President of the Chapter, Carlos Collado, is also the Northeast Province Civic Engagement Coordinator and a current student at St. John’s. Along with Guevarra, Collado appeared on Tiempo with Joe Torres on ABC 7 on September 29 to discuss their philanthropic efforts.

The Chapter’s most recent drive in 2019 raised $2,138 for the school. The goal of the drive was to construct an indoor playground for the younger students to train and exercise their motor skills in a safe and fun environment. This particular fundraiser had raised the most funds since they began their mission in 2007.

“We in St. John’s have the tools we need to help many people,” Guevara said, “We just need to find our calling. Something that hits our heart and tells us we have to make it happen; we have to help these kids.”

In addition to the fundraising accomplished for the Jorge Guevara Mellado School, the Chapter created the inaugural Tupac Amaru II scholarship for two students that have the top highest academic performance to send them to a summer camp at a local college.

The goal of this scholarship is to promote academic achievement and emphasize the importance of giving back to the community. Money raised this fall will go towards expanding the scholarship to more students and will also be designated to improve the school’s infrastructure.

Guevara envisions this project on a larger scale.

“To me, this project has the potential to help kids around the world. We discuss how best to help these students and apply best practices learned in our Alma Mater like project management and Agile Methodology,” Guevara said.

“Our hope is that others will see what we have done and do the same in other parts of the world.”