Alum Hosts Podcast Taking Listeners ‘Behind the Board’ 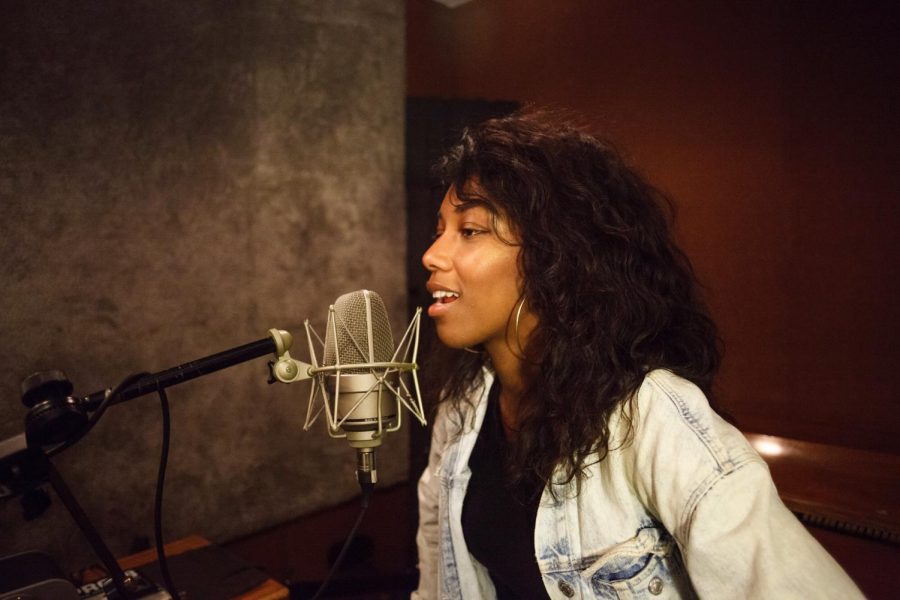 Have you ever wondered what went into the creation of your favorite album? You may know the meaning behind the lyrics or the anecdote that inspired the song as a whole, but what was it like for the producer sitting behind the soundboard in the studio?

St. John’s alum Varonica White, who goes by V.White on air, gets the scoop behind creating hit records and hip-hop beats on her podcast, “Behind the Board.”

The podcast had its beginning when White met her co-producer, Lu Comer, in a journalism class in St. John’s Hall during their undergraduate years. White and Comer bonded over shared interests, and Comer soon told White that while she was a great writer she may be better suited for interviewing and talking because of her personality.

“He told me he had this show in mind and wanted me to be the host of it. At the time [Comer was] working at The Source and had a lot of leeway to certain artists. He was able to set up a lot of good interviews.”

They began working out of a radio station in Dumbo, Brooklyn and released the first season of the podcast onto Soundcloud in 2016.

“Once we wrapped it up and relistened to it and kind of saw the audience for it we kind of realized that it’d be pretty good if we could continue on with the second season and put it on iTunes.”

White always had an affinity for music, growing up interested in all genres but specifically R&B and hip-hop. As a hip-hop fan she has been able to hear the backstories behind some of her favorite records, including clearing up the urban-legend behind rapper DMX’s come-up in an interview with producer Dame Grease and insight into the making of Lil Kim’s, “La Bella Mafia,” an album that White herself was a huge fan of.

“I feel like you can find an interview on an artist anywhere,” White explains, describing why talking to producers can be more interesting than talking to the artists themselves at times. “I’ll use Jay-Z as an example – you love the song… but you wanna know how Timbaland made that beat, and you never find out until you see something on Jay-Z 10 years later and they say how they came up with the beat.”

“That story is always more interesting than the other story you probably heard about the song.”

The podcast is not just a platform for anecdotes about being in the studio with famous artists, but rather a place where aspiring producers can find tips for perfecting their craft. “It’s not just about what happens when you’re recording or making a song,” White said.

“But then it got to the point where I started asking, ‘what is the sustainability of becoming a producer? Can you really have a life or career as a producer? How do you pay your insurance? Do you have health insurance? How are you really getting by month to month?’”

“[We] look at it on a bigger scale so that people know that Soundcloud is not the only way, Youtube is not the only way. They’ve said writing camps are a great way to get started, they also tell you the best instruments to start working with, tools to start working with, what are some of the best instruments for your budget, lots of tips. That’s really what the show’s about.”

White graduated in 2007 with a bachelor’s in English and describes the connections she made in her college years. “College in general is a great place for networking, because now I have friends that work in all different types of companies. They work in PR, marketing, they work at Roc Nation, they work anywhere.”

“Whenever he’s in town, we always just go to a suite in the Barclays and watch the show from there and it’s literally like we’re in Marillac again,” White said. “It’s all of the people we came up with, we’re all just in different places and ended up doing pretty good for ourselves.”

White is currently working on the podcast’s second season, talking to various artists including Wyclef, Chase N Cashe, A Truth Musik, Nate Williams, Kofi Black and M Slago. While White and her team are producing the second season you can listen to the first on Soundcloud.