Writer from New Mexico creates a bind between bilingualism 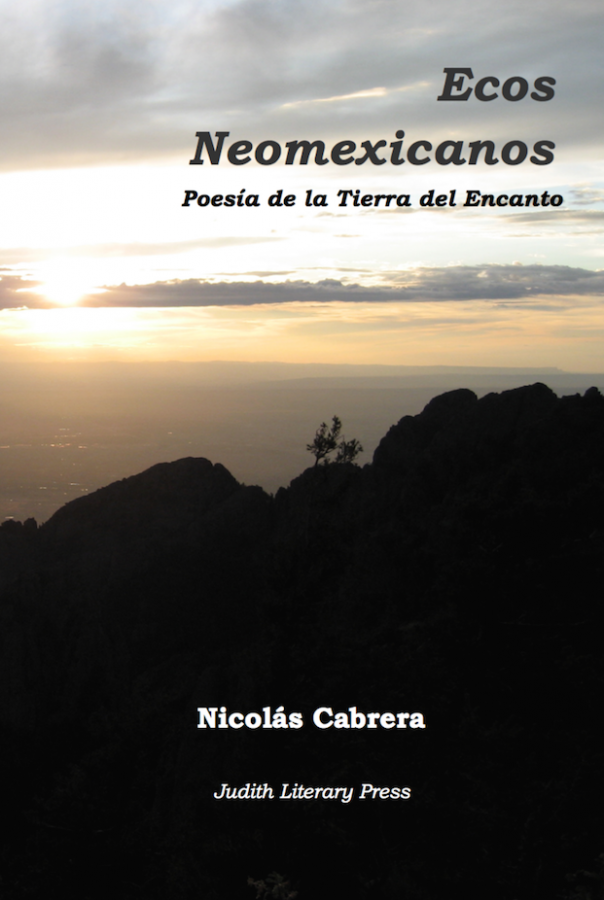 Many who live in the United States are brought up in households where their families speak a different language. Some speak the language fluently, while others are more comfortable with English. Nicolás Cabrera, a St. John’s alum, took his knowledge of both English and Spanish and laid it out in a colorful poetry book.

Dedicated to his Neomexicano (Hispanics of New Mexico) grandparents, Luis E. Montiel and María Dolores Cortez, Cabrera’s book, “Ecos Neomexicanos: Poesía de la Tierra del Encanto,” which translates to “Echoes of New Mexico: Poetry From the Land of Enchantment,” recently won the 2019 New Mexico-Arizona Book Awards in the Spanish language category. Cabrera decided it best to separate the book into two sections, English and Spanish, so that more people are open to reading it.

“I used my bilingual skills to tell stories in two languages, such as my grandfather who worked as a bracero, or seasonal farm worker, or the excitement of making bizcochitos for Christmas,” Cabrera said.

Born in Albuquerque, New Mexico, in the historic Los Griegos neighborhood, Cabrera learned both English and Spanish from his parents. When they met, his father, Juan Manuel Cabrera knew more Spanish while his mother, María Montiel knew more English but they knew enough of each language to communicate with one another.

“They were able to still fall in love even though there was a language barrier there,” Cabrera said.

This background built the bilingual dynamic that he eventually sought out for his book. The Spanish language embodies special significance for Cabrera. He even taught the language at a high school.

“At home we always spoke Spanish because we felt it was important to keep the language of our ancestors alive,” Cabrera said. “And so after a few career changes, I was a former high school Spanish teacher for a number of years.”

Cabrera has always felt as though he found beauty and potential stories in unusual places. He was always inspired to write about his personal family experiences and stories mainly related back to New Mexico and its people, culture, scenery and landscapes.

“I just felt it was important to put those stories down on paper,” Cabrera said. “I have been just jotting down verses in poems, on paper and on my laptop for years now.”

In “Ecos Neomexicanos,” Cabrera writes a story about wild mint peppermint growing in his great aunt’s backyard that recalls memories of his childhood.

“The poem describes that experience of touching the wild peppermint and being able to really take that childhood memory and create a poem about it [and] put into a verse,” Cabrera said. “So that’s what I would do. That’s where I draw my inspiration.”

“The cold and white water had now returned, My great-grandmother sat in a wheelchair.

Still kneeling, I kept touching the plant, “It’s the yerbabuena, the best we can sow.”

Cabrera’s high school friend, editor and publisher for the Judith Literary Press, David Michael Belczyk, encouraged him to create the book after reading his poems and released three printings under the publishing house.

“He said, well, maybe you should think about putting them together and developing a poetry collection,” Cabrera said. “And then that’s kind of how the idea of the book started.”

At St. John’s, Cabrera received a master of Science in Library and Information Science, with the intent of pursuing a career as a librarian. Throughout his time at St. John’s, he worked closely with the University Writing Center in St. Augustine Library to help edit his poems.

“They helped me edit early drafts back in the fall of 2017,” Cabrera said. “I don’t remember the year, but I did go to the Writing Center and they did help me with editing some of the poems. And that was before I had gotten the book offer, so I was just trying to polish some of my work.”

For Cabrera, writing is not easy. He reminds aspiring writers to keep working hard until they get to their goal.

“You have to keep writing, the more you write, the better your skills in writing become, ” Cabrera said.

“There’s going to be a lot of rejection when you try to get pieces published, but you have to keep going because one day when something finally does get published, maybe a poem here or a collection of poetry or a novel or something that sense of satisfaction, [that] accomplishment is, it’s worth it.”