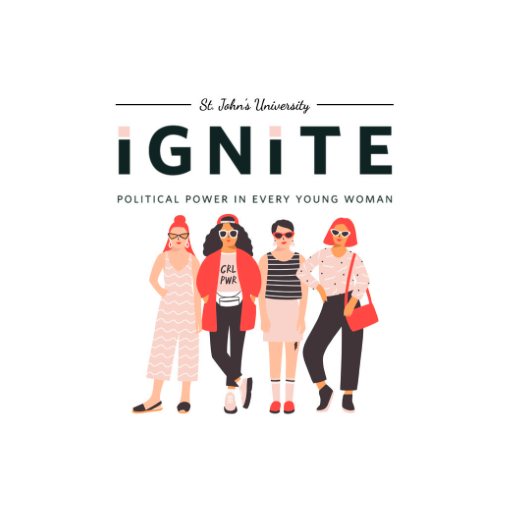 Politics on a college campus can be a hard topic to tackle. However, the new organization Ignite is sparking the conversation and promoting a campus with open, respectful dialogue. Ignite discusses things like “women’s politics, equal pay. Stuff that everybody talks about but kind of brushes over.”

President Meghan O’Donnell and Vice President Grace Burchell are both passionate about government and politics. This passion motivated them to bring Ignite onto the St. John’s campus. Ignite is a national non-profit organization composed of young women and the next generation of political leaders. Both O’Donnell and Burchell saw a need on campus for not only more involvement in politics, but also for a place where women can find their voice.

“I feel like on campus politics is not openly spoken about. People of course have their opinions but it’s not a massive presence on campus…we just want to bring a new space on campus to openly discuss policy issues, the news, and the world.”

O’Donnell and Burchell were in a class on feminist politics together last year where they noticed the issue on women speaking up in a classroom.

“We found that it is kind of hard to speak in classrooms when the [in the] majority there are not a lot of girls necessarily in a class … in feminism politics, there were only like three guys in the class, so all of the girls felt comfortable in talking because they didn’t feel pressured in being perfect or not knowing enough and not having the confidence that they do know enough.” Burchell said.

“We saw on campus there wasn’t a space necessarily that had a non-partisan, kind of political women’s empowerment club.” O’Donnell said. It was in that same class where they saw Ignite mentioned in their textbook. From then on they worked to open a chapter at St. John’s and also become recognized by SGI.

O’Donnell is a senior government and politics major with a gender sexuality studies minor. Burchell is a senior psychology major with a triple minor of international studies, french and government and politics. Both women do everything they can to cultivate a better political environment on campus. O’Donnell, who is from Ireland, shocks many when people ask her about her involvement in politics.

“So I can’t vote, which is the biggest laugh ever. I can’t even vote in my home country. If you live outside of Ireland for more than 18 months consecutively then you can’t vote. A reason why I am passionate about politics is not just because I’ve grown up here for a long time, but in my home country I see things and I want them to be changed … if women do not get involved in politics, as senators or congresswomen things will never change. It will only get worse.”

O’Donnell went on to say, “I am so passionate and people are like, ‘I don’t care to vote.’ I’m just like, I literally have no right to vote. In the sense I’m voiceless on a national level and the only thing I can use my voice for is through this … Ignite definitely gave me that voice and [I] also understand the power that it comes with.”

Ignite was recognized as a non-advisory org this past November. The national Ignite office sends each chapter a resource tool kit to start and keep the org thriving on their campus. Chapters are also paired with a fellow, who is in charge of chapters in their state. The fellow connects them with local politicians/leaders to speak at events, and also creates meetings and networking events. Anyone who wants to seek change can talk to their state fellow who will report to the President at the headquarters in San Francisco. There is even a national conference in DC where every chapter can attend.

O’Donnell and Burchell saw women who do not know what to do with their ambitions. Ignite provides a support system which cultivates motivation and confidence for women to go after their ambitions while finding their voice. “With Ignite, we say listen you are good enough as you are and you have the tools and we will give you extra tools if you need them.”

Both women reflected on the mood on campus before and after the 2016 election: “Before the elections, it was kind of all buzz on who is going to win. Then 2016, the day after the election, it was the strangest feeling on campus that has ever happened. It was a very kind of somber mood and then after that people don’t really speak about it anymore. It was just kind of like anger toward each other.”  A campus can feel very enclosed but now Ignite “[makes] sure that every member is as comfortable as they can [be]. Of course you can voice your own opinions, but you have to learn how to respect each other’s opinions.”

While O’Donnell and Burchell are entering their last semester, they still have high hopes for Ignite and the future it has on campus. “I would love to see more programs from St. John’s that have to do with women in roles or the lack of, in regards to women in politics and leadership roles in general,” O’Donnell said. “We hope to have a larger presence in years to come.”

While the org is focused on women becoming more socially and politically involved, men can get involved too. Burchell said, “It is equally as important…you need the other 50 percent to support you as well.”

It has been “a year in the making” for both women and they hope even after they graduate Ignite will be a place where politics can be openly discussed and give women their voice.