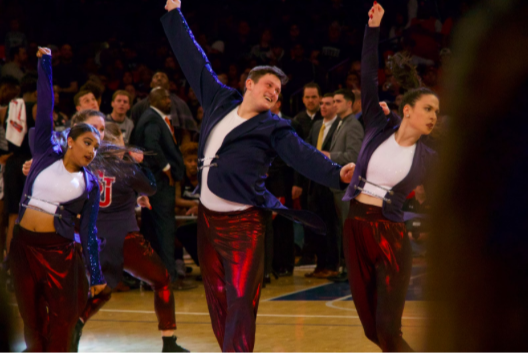 St. John’s Dance Team became national champions on Jan. 19, claiming first place for their incredible Hip Hop routine at the 2020 UCA & UDA College Cheerleading & Dance Team National Championship in Orlando, Florida. They also made University history by competing in the finals with their jazz routine, placing seventh out of twelve, an equally tremendous achievement. But the dance team has even greater goals for next year, building on what they learned and accomplished from this season.

Christine McCarton, the head coach of the dance team, has led St. John’s to win two hip hop titles in the last five seasons, the first one awarded in 2016. St. John’s has consistently placed within the top-ten in hip hop at all of their previous competitions, indicative of how disciplined, talented and cohesive this team is. Anya Vernon, a senior, said that the team “wouldn’t be where it is today without Christy and the choreographers.” In addition to their leadership, it is the boundless adoration they receive from the audience every time they perform at MSG that has led them to success.

“The leadership we have today and the support from our peers gives us the energy to power through and perform.”

For most of the athletes on the dance team, a family member or relative is what spurred their involvement in dance. With time, however, each dancer found a reason for themselves to continue pursuing the art. Emma Rios, a senior on the team, says that dance not only strengthened her as a person but gave her a support group.

“All of us are like one big family. We spend so much time together, see each other basically every day, and have to trust one another. The only way we’re able to pull off so many difficult moves is our trust and confidence in each other,” Rios said, looking at her teammates with pride.

“The best part was when we finished the routine and walked off the stage. We were crying because we knew we had accomplished everything we had been working towards, and had proved to ourselves what this team was capable of,” Rios continued.

“We don’t ever have to worry that someone else isn’t going to give it their all,” Ashley Nicholson, a junior, remarked. “That’s how it was at the end of our hip-hop routine. We didn’t do that well at the end of our semis [semifinals], so we all knew we needed to step it up for the finals. At the end of dance, I think we all knew that we had given that performance every ounce of energy we could.”

Their routine was revolutionary, unlike anything that had ever been performed at nationals before. The dancers, adorned with sparkly makeup and bold outfits, held silver silks in their arms as they executed acrobatic moves flawlessly and with the same professionalism as performances in Cirque du Soleil. As Lady Gaga’s iconic pop song “Born This Way” blasted in the speakers above, the dance team shook the audience to their core.

Hailey Behl, a junior, revealed that at the end of their winning routine, “everyone, not just us, was screaming, crying and cheering when we finished. It probably had to do with the nature and message of our routine as well, as it was based off of Lady Gaga’s ‘Born This Way,’” Behl said. “Our amazing choreographers in Florida always put together such meaningful messages in conjunction with the routine.”

When the dance team performs, the audience only sees flawless grace and fluidity, but there is no doubt that behind every turn, leap and gleaming smile, there is a sheer amount of will power and grit through the pain. To be a dancer is to transform some of the most difficult moves into messages that resonate with every person in the audience. Few people ever catch a glimpse of what happens behind the scenes or have an understanding of what it means to be training and practicing for hours on end.

Rios says that dance is not a seasonal sport and they have to perform throughout the year, even during breaks. “Right before the competition we probably devoted about 120 hours.”

For every Carnesecca and Madison Square Garden game, they’re getting ready and doing makeup for two hours, performing during half-time at basketball games and cheering on the sidelines before going home. That doesn’t even include the school work they have on top of it all, plus the prevalence of injuries.

It is the team’s constant striving for greatness that makes their success so much sweeter. The moment the team realized that they won was not only life-changing but a testament to how much time and love they devoted to the routine and to one another. Moreover, this competition was the final one for the seniors on the dance team, making this victory both the perfect finale and a bittersweet end to their time at St. John’s. Vernon enthusiastically said, “I’m excited to finally get that championship ring!”

“I am incredibly proud of our team this year. They have put countless hours in since the summer to make their dreams of winning a national championship a reality,” said Coach Christine McCarton. “Their performance in the final round of competition was electric. We are so pleased to be bringing another championship to St. John’s.”

When it comes to the next year, the team hopes they can keep the national title with yet another strikingly impressive routine and earnest message that encourages the audience to think about social and cultural issues.

For students who hope to join the nationally-acclaimed dance team at St. John’s, the dancers had some words of advice. Prospective members should be humble and ready to learn new things.

“It’s really the familial dynamic of this team that has carried us so far,” Vernon affirmed. “When I first joined the team, I wasn’t the most confident dancer, but my teammates helped me grow as a person and athlete. We want to do the same for the next group. We all have something we can learn from another person.”